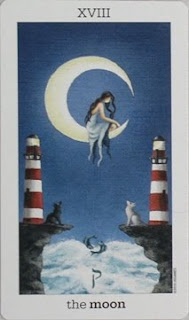 The Sun and Moon Tarot is a Thoth-flavored deck created by artist Vanessa Decort. The images are stunning in their simplicity. Surprisingly, the most obvious and quirky fact about the deck (the people have no facial detailing) is something I have found I don't even notice when reading with the deck. I was looking forward to the publication of this deck for awhile, and was definitely not disappointed when I was finally able to hold a copy in my hands.

The Cards
The cards measure 2 3/4" x 4 3/4" and feature reversible backs. The font is an attractive one, and there are keywords on the Minors (with the exception of the Aces and Courts). The cards have a very light sheen to them, but are mostly matte, which I really like.

The deck is, quite unfortunately (for me), printed on relatively inflexible and thicker card stock, similar to (but seemingly not quite as stiff as) the Paulina Tarot. I know some tarot readers love the new card stock, but I am not one of them. This is a fairly new development from U.S. Games, and it is so disappointing to me, because these are two decks that I would love to use on a regular basis that I will not be able to, simply due to the lack of comfort and ease while shuffling. I find this card stock easily creases and remains unyielding no matter how much shuffling is done. (I shuffled the Paulina daily for at least four months with the hopes of breaking it in, and it never became any easier to shuffle.) A large part of the reading process for me is the ease with which a deck shuffles, so this is a bigger deal to me than I wish it was.

That's the bad news (and won't even be bad news to those who like this new card stock). The rest is only good news! 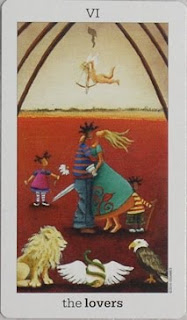 The images on the cards are delightfully refreshing. The artist didn't fill in every square inch of space on each card (making it feel quite the opposite of the minutely detailed Paulina Tarot or Shadowscapes Tarot). I find myself enjoying immensely the serenity of the empty spaces in these cards. The images get their messages across in a simple way, without needing to give a thousand clues to help you along.

The people in the deck have blank faces, completely devoid of eyes, noses or mouths. I found the effect to be similar to the Sakki-Sakki Tarot (which features headless bodies). When reading with the Sun and Moon Tarot, I don't even notice the figures have no faces. The atmosphere of the card, along with the simple symbolism and body postures express everything quite clearly. I think this is a wonderful deck to practice reading intuitively, as it gives your mind space to wander on its own.

The Minors each have a common background. The Wands all take place on terracotta dry land, with a dark night (sometimes-starlit) sky as a backdrop. The Cups show early evening moonlit skies, with people in the water (the only Cups card without a moon is the Ace). Swords figures are either in the clouds themselves, or set in front of a daytime, blue-skies-and-white-clouds day. And Pentacles all have an orange-yellow sky, some cards with grass and others set on desert sand.

Some might find the suit themes monotonous, but I really, really like it. I think if the colors were bright and garish, it would be too much. But the colors are muted and soft, and flow nicely together, even if several cards from the same suit are next to each other. I like being able to look at a spread and tell right off the bat how many of each suit are there. The "uniforms" of the suits make it easy to instantly see how much of each type of energy is prevalent in a reading. 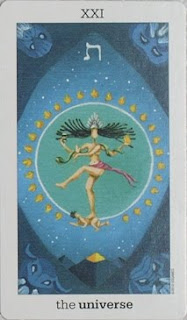 The deck is called Sun and Moon Tarot, which had me wondering a bit. I see the Moon in the entire Cups suit (and several Major Arcana cards), so I was expecting one of the other suits would equally feature the Sun. A bit perplexing, that. The actual sun only appears in three Major Arcana cards, one of them being, of course, The Sun.

It's hard for me to pick some of my favorite cards, because there are just so many! The Moon card (above) is so dreamy... with a lovely lady sitting on the crescent moon, looking down into the rough waters, two lighthouses serving as the towers. I was thrilled to see a delightful new take on the Universe card, (left) featuring a beautiful depiction of the Hindu God, Shiva as Nataraja. The Lovers (above) is another favorite, mostly because it features an interracial couple embracing. (I love it when tarot addresses real-world unity like this!) I also adore the sassy stance of the Princess of Swords (below).

The Threes are particularly awesome: The Three of Swords appearing as a cloudy thought bubble. The inspired spiritual graffiti artist in the Three of Pentacles. And the Three of Cups is so fun, with three joyous and tastefully bikini-clad women raising cups and splashing in shallow water.

Then there's the creative interpretation of the Wheel of Fortune (below), with the domino effect of the cogs in motion. The Star card is gorgeous, depicting a mermaid, half in and half out of the water, with a green sky. And Death (below) emphasizes rebirth with a Phoenix. 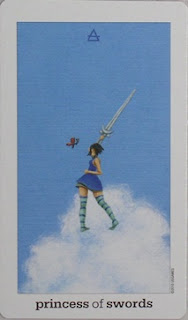 One card that makes me wonder a bit is Strength (below). It looks more like a Moon card to me. Half of the card is taken up by a full moon. And there is a woman sitting on the back of a wolf, who is howling at the moon. Lovely card imagery, for certain, but doesn't remind me of Strength as much as The Moon.

Because the cards are Thoth-based, the Kings are on horses and the Princes (Knights) ride chariots. Since I'm accustomed to RWS type decks, and I didn't want to train my brain to switch systems, I switched the cards to better suit my intuition. My mind sees "Knight" when I see a Court guy on a horse. And the chariots seem more Kingly to me. So that's how I used, and will continue to use, this deck. I also switched one Queen and Princess. The Princess of Pentacles looks older and more mature than the Queen of Pentacles. And she's pregnant. My eyes are always going to think the pregnant one is the Queen, not the young Page.

How it Reads
I really love the way this deck reads. It's smooth and to-the-point. Since the imagery is so simple, there's not much to confuse or muddle the reading. It is what it is. And I like that. I can fully appreciate that as a breath of fresh air. I find that the cards do a wonderful job of setting the story that my intuition needs to tell. 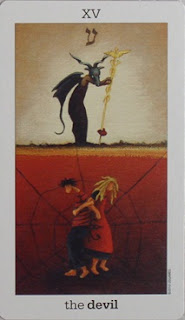 The LWB
The Little White Book starts with an Introduction to Tarot and the Sephirot. It's a nicely detailed LWB, as far as LWBs go. There are detailed meanings for the Majors, and sufficient explanations for the Minors as well, with all 78 cards given astrological correspondence.

There is one spread in the book, a 2-4 card layout called "Sun and Moon (Yin and Yang) Reading". The LWB ends with a brief bio on the artist and a few pages for notes.

Final Thoughts
I love this deck. In fact, it's one of my favorite new decks I have discovered in awhile. I think the artwork is beautiful and thoughtfully done, and it reads wonderfully. I find the images so visually attractive... it's a deck I could definitely see myself working with on a regular basis, if not for the card stock. Perhaps one day U.S. Games will make the "Sun and Moon Tarot in a Tin"... with the same card stock as the other "tin" decks. I'd be all over that!*

*2017 UPDATE: This deck IS now available in a tin!! I have posted a brief comparison between the two decks here. 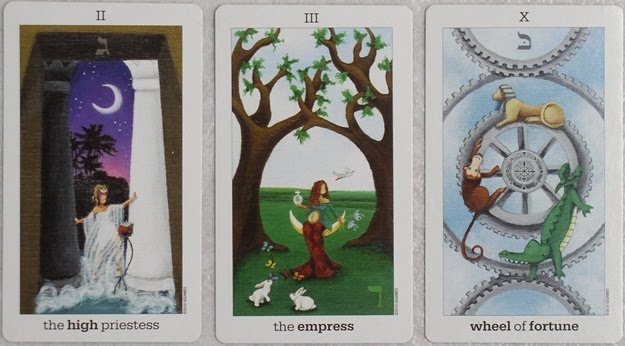 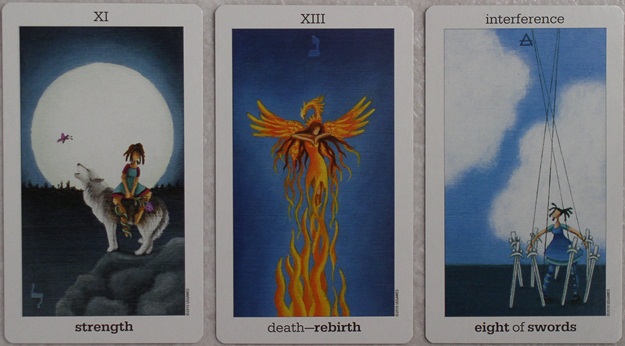 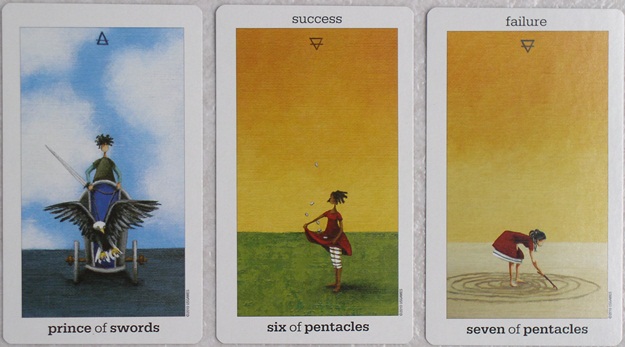 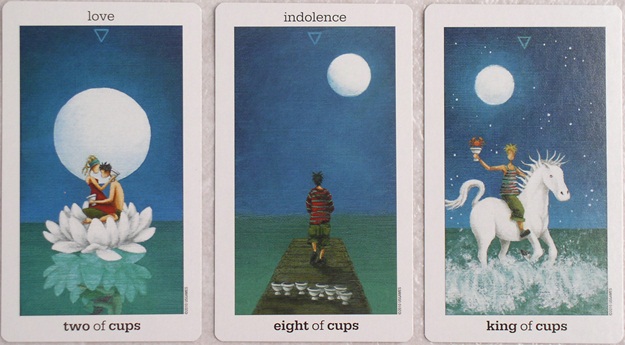 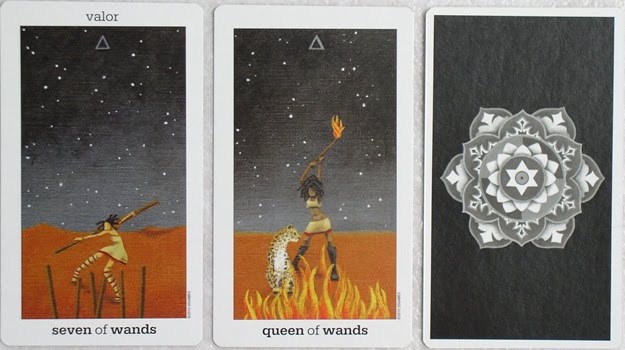 This deck review was originally published on my previous blog (Tarot Dame) on 8/15/10.