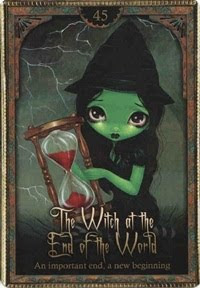 The Oracle of Shadows and Light is a spectacular new oracle deck and book set published by Blue Angel Publishing and created by fantasy artist Jasmine Becket-Griffith and renowned author Lucy Cavendish. The moment I laid my eyes on the few cards online, I was in love. It was a must-have. To call this deck a breath of fresh air might sound strange, considering it's touted as "Wisdom for Misfits, Mystics, Seekers and Wanderers", and filled with haunting, otherworldly beings... but that's exactly what it feels like to me. A refreshing new approach to an oracle deck, boldly standing out in a sea of sameness.

The Cards
The set consists of 45 cards, and a 136-page accompanying softcover guidebook, housed together in a hardcover box. The cards measure approximately 3 3/4" x 5 1/2" and are printed on sturdy card stock with a glossy finish. The size and stiffness of the cards make them difficult to shuffle. I've been shuffling them vertically, at the corners. The backs feature the Angel of Alchemy, the center figure in the card of the same name. Each card is numbered on top, and named at the bottom, with brief key words or phrases below that.

One of the things I love about the deck is the variation of different beings. There are angels, mermaids, witches, fairies, ghosts, ancients, historic beings and other entities. (Some of them are difficult to categorize, and it would have been nice to read in which category they belonged with their descriptions.) I'm so glad it's not a deck with only fairies or only mermaids, or some other suchonly category. And I'm thrilled with the inclusion of beings that are not typically found in decks, such as ghosts, witches and other unique entities. 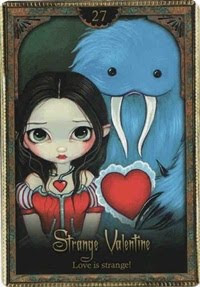 There are beings representing several different cultures, and the clothing fashions are extremely varied in terms of both style and time periods. You'll see styles ranging from goth to aristocratic, steam-punk to masquerade, Hawaiian to Latin American, etc.

The artwork is stunning. I immediately nicknamed my deck the "Creepy Cute Dolls" (though they're really not creepy after all). I love these big eyed beauties. When my six year old daughter saw the deck and the huge eyes, she said they looked like Littlest Pet Shops in human form. Their eyes are so expressive. They are doleful, vengeful, timid, afraid, pensive, tired, strong... yet never quite joyful. You can feel what they are feeling by the expressions on their faces. They tug at your heartstrings. And in that, you can tell that they know how you feel, as you can clearly see that they feel it too. They don't sympathize. They empathize.

And they aren't afraid to tell it like it is. They don't sugar coat things to save your precious feelings. They are here to help, and they can't do that without being totally honest. And if you don't get it the first time, they'll be back. (More on that later.) But while they're giving it to you straight, they are also doing it with care. They're not mean spirited with their brazen honesty.

It's terribly difficult to choose a few favorites to talk about, because they are all so fantastic. The Witch at the End of the World (above) is adorably reminiscent of the Wicked Witch of the West from the Wizard of Oz, with her green skin and hourglass. But she offers you assurance, with her demure posture and expression, that all will be well, and the change you're about to go through is nothing to fear.

The Strange Valentine (above) is another favorite because it is Just. Too. Cute. Another one I love is the enigmatic Lady with a Bosch Egg (below). It's a gorgeous, gorgeous card. If there was one card I would change, it would be Kali (see below)... I wish I could see her full body, rather than a slightly frustrating peek. 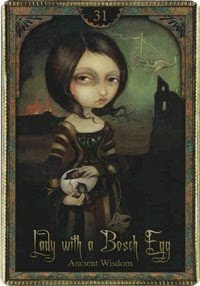 How it Reads
This deck is magical. At least that has been my own personal experience with it. It seems to know me, and hear my questions and answer with more knowing than a simple stack of cardboard images. And when I don't "get it", the card(s) will come back until I do. If it's a message that I still haven't understood or a task I have not yet completed, the same card will come up until the lesson is learned. I'll share a few examples of this Repeat Phenomenon.

The first day I received the deck, I drew the Grumpy Red Fairy (below). I was in a great mood, so I didn't really understand why she came up. So I read the excerpt in the book, which told me to be my true self, and stand up for myself. This fairy has had to deal with people telling her they don't like her hair and clothes and attitude. And rather than acquiescing to their demands that she be "normal", she stays true to herself and stands her ground. I knew what she was referring to in my life. I had someone who had been telling me to change, continually telling me that what I was doing wasn't good enough. I knew I had had enough of bending over backwards to please this person, and I needed to stand up for myself, but I was afraid to. I don't like confrontation. I avoid it whenever I can. So I didn't do anything. The next morning, I shuffled and drew my daily card. Again it was the Grumpy Red Fairy. I smiled. I knew at that moment that she would continue to come up for me until I took care of the matter. I put it off that morning. But I thought of the fairy again in the afternoon, and I followed her advice. I stood up for myself. And she didn't come back after that.

An interesting side note to this story... that first day I also pulled a card from another oracle deck that said the same thing... to stand up for myself. And the following morning, when I drew the Grumpy Red Fairy for the second time... I also pulled that *same* card from that other oracle deck, with the same message!! Kinda hard to put it off after that! 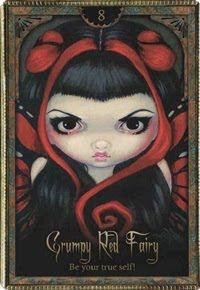 The third day with the deck, I pulled the Fairy of the Green World. So I decided I needed to do some eco-friendly project. I sewed up a few sets of cotton napkins, so we would use less paper towels. I also spent more time than usual outdoors that day, and opened the windows to let in some fresh air, despite the excruciating heat and humidity pouring in. Later that evening I shuffled and drew a card. It was the Fairy of the Green World again! I didn't know if that meant I did a good job, and her reappearance represented her approval, or if she was saying I needed to do more. So I shuffled and asked "What does the Fairy of the Green World think of my napkins and environmentally-friendly actions today?" I drew one card. Guess who? Yep! The Fairy of the Green World answered herself. Three times that day, I drew her, and only her! What are the odds of that? I feel now like she was giving me a hug for following through with her advice. (I have since made several more sets of cloth napkins!)

The next morning, I drew Amara the Menahune... the card of Hawaiian healing (below). Later that afternoon, I had forgotten that I had drawn my card for the day already. I took out the deck for my daily draw. I shuffled, and was about to cut the cards when I remembered I already did draw a card that morning. I remembered the Hawaiian girl on the card. Then I thought to myself, "Wouldn't it be funny if I drew her again?" So I proceeded to cut the deck and sure enough... she's the one I cut to! Amazing. The deck was prepared to repeat the message they had already given me that morning. It turns out I discovered a new manifestation technique that evening, and I noticed that the guy who was talking about it was from Hawaii! I thought that was a neat synchronicity, so I asked the cards what they thought about this technique, and of course the Hawaiian girl came up as a thumbs up! By now, I realized how magical this deck was going to be for me.

The deck continues to give me repeating cards, as evidence of their dedication and my thickness and/or procrastination. But it never feels like they are reprimanding me for not getting it the first time. Theirs are gentle reminders. Helpful, caring nudges for my benefit, until I get it right. Always relevant, always helpful. 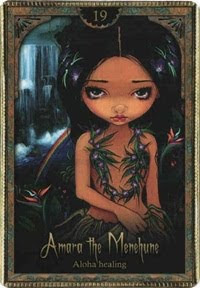 Book
The accompanying book is written by Lucy Cavendish, who is a knowledgeable and practicing white witch. The book begins with a lengthy introduction to the deck and the beings which inhabit it. Following are three spreads: A 3-Card "Past-Present-Future", a 5-Card "Simple Celtic Cross" based on elements and direction, and a 4-Card "Hidden and Revealed" spread.

Each card is presented in the book in numerical order, and features a small black and white image of the card. The descriptions for each card are provided in three sections. The first part tells us about the being. The second part is a message in the being's own words (a nice touch that I enjoy very much). And the last part is the divination message for each card.

The book offers interesting insight into the cards, and you can tell it was written with passion and love for each and every one of these wonderful entities.

Final Thoughts
I am very smitten with this deck and its unexpected group of champions and cheerleaders. It's so eerily attuned to me that I have told people that it feels quite alive! I think there was definitely a void in the oracle world that this deck has filled. It's quickly become one of my favorite oracles for needed guidance. The artwork is gorgeous, the characters are quirky and the messages are heartfelt (and in my case, damned determined and dedicated to boot!) It's a deck I am recommending left and right whenever I get the chance! I mean, where else are you gonna find Marie Antoinette, a sewer mermaid, the Hindu Goddess Kali, venus fly traps and a furry blue yeti all in one place? 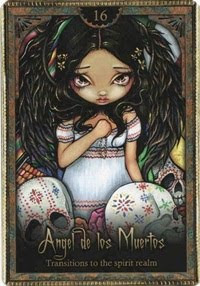 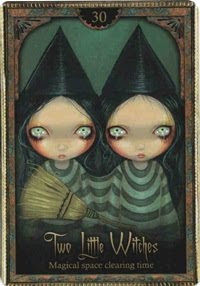 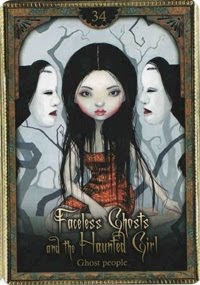 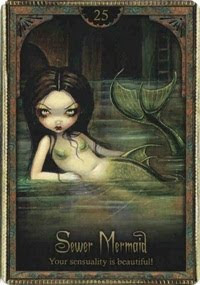 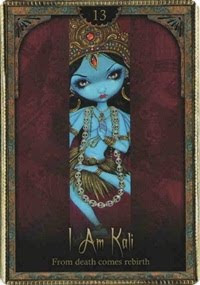 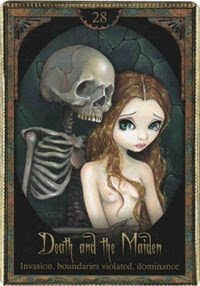 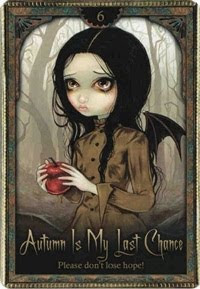 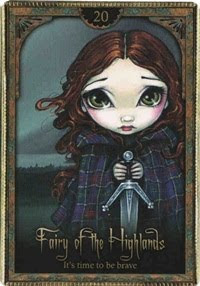 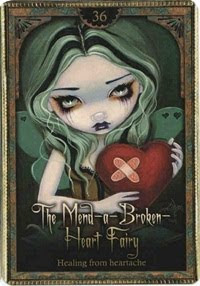 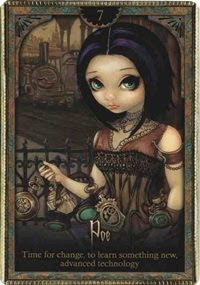 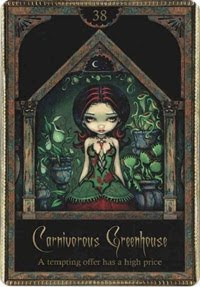 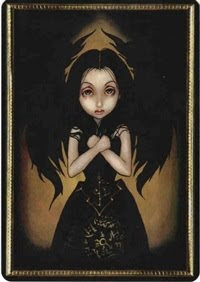 This deck review was originally published on my previous blog (Tarot Dame) on 7/19/10.