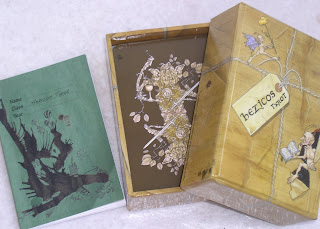 The Hezicos Tarot is an enchanting deck, self-published by Mary Griffin in the UK. When Mary approached me to review her deck, it was several months before it was printed. I eagerly awaited the publication of the deck, and it was well worth the wait.

Hezicos is a name invented and trademarked by the artist. When she was very young, she used to play with her brother and sister in a make believe world in the garden, which she called Hezicos. She said this imaginary place was like another planet to them. I think the sweet story behind the name is perfectly fitting for this deck.

When I opened the parcel, I was quite honestly shocked at the quality of the set, as the box alone far surpassed the standards of most mass marketed decks. The box is designed to look like a package, wrapped in twine all the way around. There are ladybugs and spunky faeries on the box, one even attempting to escape. The two-piece box itself is thick and sturdy and creates such an attractive storage unit for the deck that I am more inclined to set it up for display rather than put it away in a drawer or shelf. 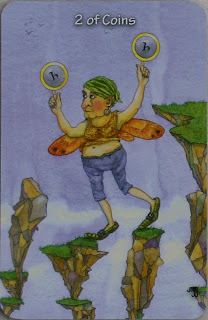 The Cards
First of all, the cards are borderless! Now you know that makes me a very happy camper, right off the bat. The card stock has a lovely matte finish, and they shuffle beautifully. The cards measure 3" x 4 5/8" and the backs are reversible, featuring a dryad holding the four suit symbols (see image below).

The illustrations were done in watercolor and ink. I am particularly fond of the look of bright watercolors bleeding together (rather than blending seamlessly), and there are countless cards in this deck where the artist has done just that, and that is a big part of the charm in this deck for me personally.

The Majors and Minors in the Hezicos Tarot differ from each other, in that the Majors feature human characters while the Minors portray members of the fae world. The Court cards are head shots with a tribal look to them, with the Pages looking to the left, Knights looking to the right, and Queen and King facing forward. The Aces show the singular suit symbol with a plain background, to match the background of the Courts of the same suit.

The two Majors that jumped out to me first were the Moon and Sun, as they are quite stark, illustrating simply a moon and a sun, rather like cards from a Lenormand deck. I wondered how this would play out in a reading, as they didn't seem to blend in, though I was drawn to them in a positive way. When I drew the Moon several times during the first week of using this deck, I found that the bluntness of the card helped to emphasize the powerful effect of its influence over the other cards. I mentioned in the comments of one of my posts that perhaps these two cards should stand out in this way, as they are such a significant part of our world, yet at the same time, not of Earth. 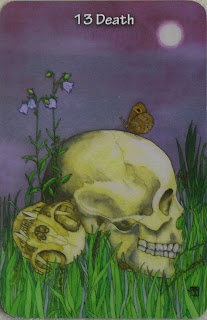 One of my favorites from the Major Arcana is the Hermit. This is one of my favorite cards in tarot, so I'm always interested to see what the artist does with the Hermit. The Hezicos Hermit is wonderful... a bald, rotund Buddha seeking enlightenment. The Empress is also one of my favorites because of its rich colors and the fact that she protectively yet gently holds a child on her lap. The Death card is another one that grabbed my attention and didn't want to let go. Every time I see this card, it reminds me of the cover of the book, Inkdeath. I love the human skull beside the feline skull, and the butterfly (representing metamorphosis) resting on top, as well as the significance of the bluebells rising from the death. I love the combination of purples and greens in this card, using color to portray the concepts of death and rebirth.

Talking about some of my favorites in the Minor Arcana is tricky, because I could be here a long time. First of all, the suit of Rods is usually my least favorite suit. So when an artist is able to make the Rods my favorite suit, it's a rare event. Mary Griffin has done just that, bringing her rods to life, chock full of character! The Eight of Rods makes me smile with glee every time. The sticks, complete with faces and arms, are flying through the air, arms outstretched like Superman. The Five of Rods features five of them, not so much fighting brutally, but appearing to be trying to push each other out of the way, like annoyed, grumpy old men. The Four of Rods, one of my favorites from any deck, shows the four rods holding up a platform upon which a lovely little cottage sits. The expressions on the rods' faces are precious and keep this suit interesting for me, which is very refreshing.

The Cups and Swords are integrated in the cards in normal RWS fashion, however there are several cards from the Coins suit where the coins are just lined up at the bottom or side of the card. I find that a little distracting, and would have liked to see all the coins blend into the setting a bit more. The coins themselves are blue circles, framed in yellow with the letter "h" in each center, which I assume stands for "Hezicos". I find the deviation from the pentacle symbol a nice change of pace. 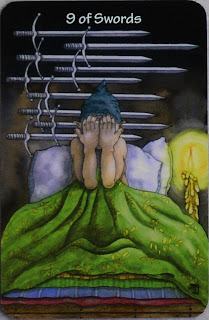 The Minors really have a lot of character. The faeries vary from nude fey-like beings, to troll-like elves or faeries, who are very charming and lovable. Even the scenery is enchanting, for example the crooked stairs leading up to crooked doors in the side of a mountain in the Five of Swords. Or the mushroom house in the Ten of Coins. There are a couple of shell houses, and other hidden, whimsical treasures tucked away in these cards, which really are a feast for the eyes.

How it Reads
The Hezicos Tarot is a very quirky deck, in that there are many ways in which it strays from the norm. There is the obvious simplicity in the Moon and Sun cards, as well as the way the Aces and Courts were done. Then you have the Human Majors which were done in a mostly traditional manner, and the whimsical Fae Minors. There are cards that scream with vibrant color while others are more muted and subtle. How will all of this combine together in a reading? Very well, actually. The cards playfully compliment each other. If there is a simple card that stands out from the others, it provides a stronger emphasis and direction for the rest of the cards. I'm all about the flow in a reading, so I was surprised at how the different elements from this deck didn't affect my readings in a negative way, but rather enhanced them.

I find this deck to be very intuitive and accurate, as well as charming and endearing.

I will say that I think that one would need to have familiarity with Court cards to comfortably read with this deck. There isn't a whole lot to go on, and their expressions are very similar to one another. So you really need to rely on your knowledge of their individual traits. 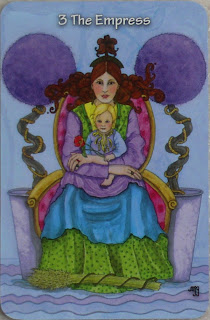 The LWB
The 56-page Little White Book has a thick green cover, and full color pictures of the cards inside. It is designed to look like a student's composition notebook, with an awesome ink splotch on the cover that looks rather fae-like, as far as ink splotches go. There is an introduction, and a section about the artist. The next two pages discuss the actual artistic process, including details about the materials used. Also included are brief sections on cleansing the deck, shuffling, and using a significator card. The spreads included include a 3-card Yes/No spread, a 21-card Romany spread, and the Celtic Cross.

There is a small color image of each card in the book accompanied by upright and reversed meanings. The Majors feature a brief description of each card, and the Courts include a quick personality description. There are four pages for notes at the back of the LWB.

Final Thoughts
I am quite enamored with this deck, box and LWB. The production quality is excellent, and the cards themselves are wonderfully quirky and beautifully drawn and painted. It's a solid reading deck with aspects of both human and fae life.

The deck is available directly through the artist at HezicosTarot.com, where you can preview the entire deck. While you're there, I also recommend visiting her gallery of fascinating Trompe l’oeil work. 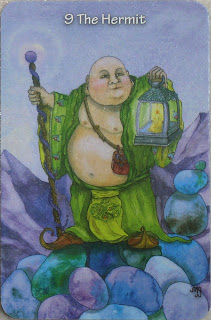 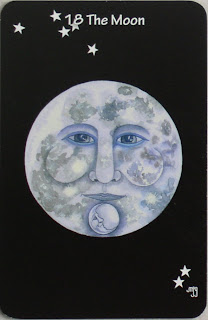 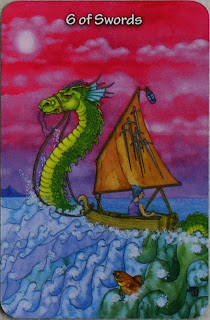 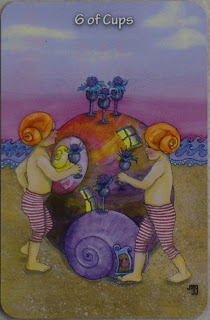 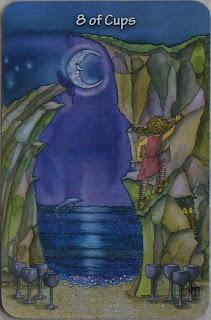 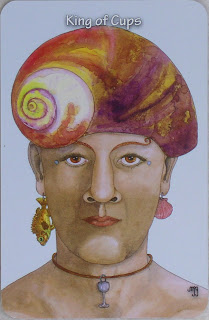 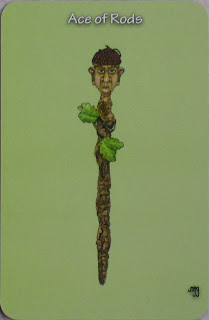 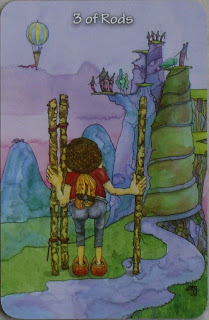 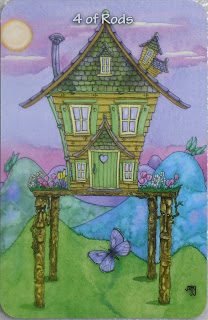 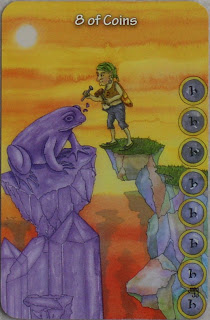 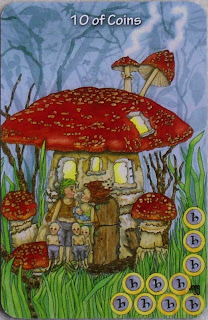 To purchase this deck, visit Mary Griffin's website at HezicosTarot.com.

This deck review was originally published on my previous blog (Tarot Dame) on 2/8/10.