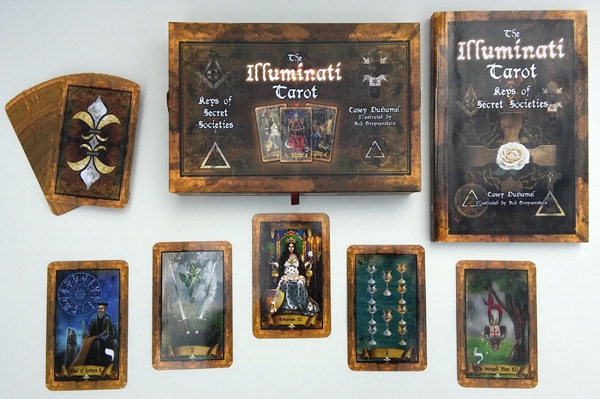 The Illuminati Tarot: Keys of Secret Societies is a fascinating deck from Schiffer Publishing, by Casey Duhamel and illustrated by Bob Greyvenstein (not to be confused with the similarly titled Tarot Illuminati). This is probably going to be my most image-heavy review to date, because there is just so much I want to share, so many different things to see in this deck.

The deck and book come housed in a nice sturdy box with a magnetic closure. The cards measure 3" x 4 3/4". They are highly glossy, making them very difficult to photograph, so there is quite a bit of glare in my photos (I attempted both indoor and outdoor photography). The backs are reversible, featuring a double-ended Fleur-de-lis design (shown in the first photo). The card stock is very thick, and not the easiest to shuffle, but doable.

While I'm not usually a fan of borders, I don't mind these, as they have an antiquated look that I like. The images also have antiquated detailing. The Fool (above) even has ink smudges that look like an ink bottle was placed on the image. These little details are really attractive to me.

The Cards
This is a themed deck which includes five secret societies. The Majors and Minors (Pips) are each represented by a different society:

Majors: The Priory of Scion
Wands: The Golden Dawn
Cups: The Rosicrucians
Swords: The Freemasons
Coins: The Martinists

I know nothing about secret societies, so I did not come at this deck with any preconceived notions.

This is a pip deck. The Minors are illustrated solely with symbols. I found this unfortunate for two reasons. First and foremost, the Majors and Courts are so clever and gorgeous, that a fully illustrated deck would have been heaven, and would have made this deck infinitely more readable. The second reason for my disappointment in the pips is that I find them either boring/repetitive (Wands), or completely impossible to decipher (Coins). The Coins are filled with astrology and symbology and Hebrew lettering, none of which is explained or even mentioned in the book, making them completely unreadable for me.

The Majors and Courts and Aces are beautifully done. I just found myself oohing and aahing over so many of the cards. It's such an eclectic mix of imagery, I don't know where to begin!

I am familiar with many of the characters in the cards, but there are some I had never heard of. Some familiar faces: Leonardo da Vinci is the Magician. Jesus is the central figure in the Lovers card. Sir Isaac Newton is the Chariot. Nostradamus is the Wheel of Fortune. Joan of Arc is Strength.

The Courts are renamed:

The Courts are really interesting, being represented by humans of history, mythological creatures, gods and goddesses, statues and constellations. Among them is a mermaid, a quinotaur, the goddess Isis, the god Osiris, and the Statue of Liberty, just to give a little example of the variety. The Mage of Coins is one of my favorite cards in the deck, featuring a constellation with a beautifully colored background, but the book does not tell you what constellation it is, or the meaning behind the symbology.

Further down in the review, I have included images of all the Court Cards. This is the first time I have done this in a review, but the cards are so varied I couldn't pick and choose!

The Aces are absolutely gorgeous. Each of the Aces feature what appears to be a castle window, with the suit symbol portrayed in stained glass. Outside the windows are different cities in different seasons. I can't think of a set of Aces from another deck that I love more than the way these were done.

I found the Swords pips to be the most interesting of the four suits, with slightly more in the imagery than just different placement of the suit symbols.

How it Reads
One day I drew the Chariot on a day when all I did was drive around on errands all day. I ended up going to nine different stores.

Another day I drew the 8 of Cups + Empress + Wheel of Fortune. We were celebrating Mother's Day a day early, because Mother's Day happened to fall on my daughter's birthday that year. As I was looking at the cards I had just drawn, my kids told me they were going to give me a massage. As they were massing my back, they played my favorite song by Josh Groban "Alejate". During the song, it hit me. Alejate roughly translates to "walk away", which is the 8 of Cups! The Empress was me, a mother on Mother's Day. And the Wheel of Fortune is an unexpected event, describing this unexpected spa treatment from my kiddos! How funny that the entire scene played out just as I was contemplating the cards.

That same day, I asked what I could do to make my daughter's birthday (the next day) a good one. She wanted no gifts this year, no special food, no cake (no birthday cake!!), no decorations, nothing (minimalism in full effect). I drew Tower + Hermit + Queen of Cups.  Our regular birthday traditions were shot to hell (Tower) as my daughter just wanted a quiet, normal day following her inner guidance of not being extravagant (Hermit). The Queen of Cups was telling me that I needed to be supportive and understanding, respecting her wishes and choices, despite my sadness that I couldn't "properly" celebrate my daughter like I wanted to.

I was able to read with the deck quite well, but when a pip card came up, I read it as I would a RWS card. The Eight of Cups, for example, I read as "walking away" even though nothing in the imagery or symbolism indicated that meaning. I don't think I drew a Coins card during my time with the deck.

The Book
The 176-page book has a thick, glossy cover. There is a Table of Contents which lists all the sections of the book, as well as a page number given for each of the cards.

Chapter Three goes into detail on the different parts of the deck (pip associations with playing cards, elements, seasons, etc, even assigning each of the suits with the Neoplatonic Four Humors, which I had never seen before.). The Courts are also assigned elements and Tetragrammaton designations. This section also goes into the history of the Major Arcana.

Chapter Four is titled "The Priority of Scion" and it precedes the section on the Major Arcana which represents this society. Each suit is preceded by a brief introduction to the society it represents.

The Majors each feature a small color image of the card, followed by a relevant quote. This is followed by background information on the character or history of the card. Each card is given attributes such as an Archangel, Cabala, Element, Hebrew name, and sometimes astrology assignment. This is followed by the tarot card's history. And lastly, a list of keywords is given.

The Courts are treated similarly to the Majors, but the attributes given are Nature, Element, Tetragrammaton, and Card Personage.

The pips are given only keywords. There is absolutely no information on the card images or symbolism at all. Again, with the way the Coins were done, I cannot understand this decision.

The book ends with a Conclusion page and a bibliography.

I am no more clear on the subject of secret societies than I was when I first got this set. While the book information goes into great detail of the "who" and "when" and "where", it does not address much of the "what". If you are looking to learn more about secret societies and what they are all about, this wouldn't be your best place to start. The deck and book (cryptic pips, mythological court cards, etc.) left me with more questions than answers.

Final Thoughts
I am torn here. The Majors, Courts and Aces are magnificent. Some of the pips are okay, the Swords being the most interesting. But overall, the pips (mostly the Coins suit) make this deck unreadable to me. I considered making this a Majors only deck, but I would not want to leave out the Courts or Aces. Can you have a Majors-Courts-Aces only deck? Bit strange. So I don't know. I love half of this deck so very much. If you can make heads or tails of the Coins, then I'd highly recommend this deck. It is gorgeous and intriguing and so very interesting.