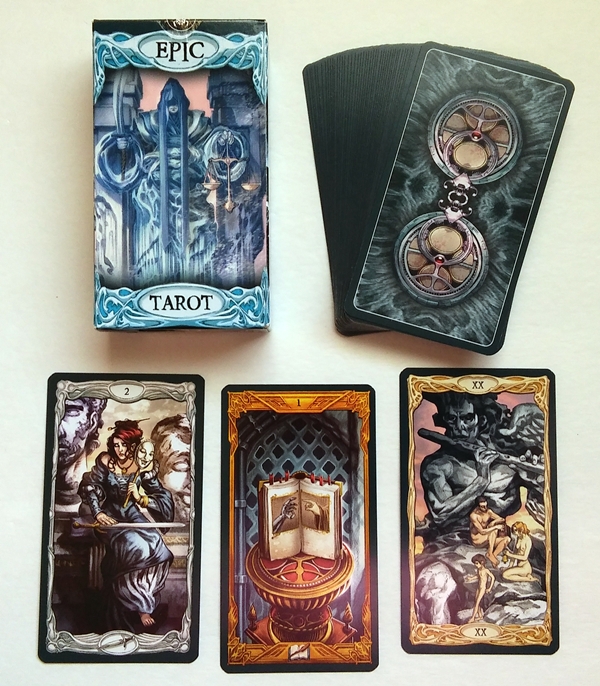 Epic Tarot is a beautiful fantasy deck by Riccardo Minetti and Paolo Martinello, published by Lo Scarabeo, and distributed in the US by Llewellyn.

The Cards
The cards are the standard Lo Scarabeo cardstock (my favorite tarot card stock) and size (2 5/8" x 4 3/4"). The backs have a reversible design (see image at the top of this review). There are five different borders, with the Majors and each of the suits having a different inner border. I'm not a huge fan of the ornate nature of the borders, nor that they are varied. The deep blue outer borders are the same throughout the deck.

There are no titles on any of the cards in the deck. The Majors are numbered twice for some reason, with a Roman numeral at both the top and bottom of the card. The Minors have a regular number at the top, and the suit symbol at the bottom. The Courts have the court symbol on top, and suit symbol on bottom.

This deck has a unique take on the Courts. The Knaves/Pages are Unicorns. The Knights are Griffins. The Queens are Phoenixes and the Kings are Dragons. I admire the idea behind this creativity, but it is difficult for me to tell the difference between the Griffins, Phoenixes and Dragons at first glance. The Court symbols at the top of the card are not much help, especially between the Griffins and Dragons. I would have loved to have been able to differentiate between them more easily. I wish they were creatures as different as the Unicorn to tell apart. In addition, within the creature groups themselves, there is nothing that feels different about them. So all the Knights/Griffins look the same, all the Dragons look the same. There is nothing that makes one of the Dragons look or feel more like a King of Cups as opposed to a King of Swords, other than the suit symbol appearing in some of the cards (but not all!).

Yet another thing that does not help is that the colors of the court symbols (on the tops of the cards) match along suits, not station. (The Swords Court symbols are maroon, the Pentacles Court symbols are yellow. So the symbols for the Unicorn, Griffin, Phoenix and Dragon of Swords are all maroon. Which means there are four different colored dragons, four different colored griffins. As they are already hard for me to differentiate, it would have been easier if all the Dragon symbols were one color, etc.

There is something I did find interesting about what the creators did with the Court Cards, which I will address below in the LWB section. But as far as the execution of the Courts as readable and/or distinguishable from each other, these were a huge fail for me.

As for the rest of the deck, the artwork is gorgeous and there is a fluid balance of feminine and masculine energy, which I find very refreshing.

Even though the Fool doesn't have a very naive vibe to me, the artwork is just stunning and mesmerizing. There is quite a bit of romantic/fantasy surrealism in the images, which really calls to me. I don't even understand the story behind the Wheel of Fortune, but it captivates me and draws me in. There are a lot of cards like that in this deck.

The Hanged Man is a woman, with a snake wrapped around her. It is one of the most (if not THE most) beautiful Hanged Man cards I've seen. The Moon is another unusual depiction, with the reflection of a woman in a mirror. The LWB says, "You think you are looking at reality, but it is your own projections. Look around the mirror, leaving your expectations behind, and you will discover a different reality." I really liked this description.

The World card features a woman, but instead of the usual creatures in the four corners of the card, as you would find in RWS decks, this woman is surrounded by the four creatures that represent the Court cards. These four animals also appear in the Ten of Swords and Ten of Wands (and perhaps others I have missed).

The Six of Books/Wands takes me back to a scene in the 80's movie The Golden Child (same half-woman, half-serpent shape behind a screen). So that's a fun blast from the past!

There are a lot of cards that don't make sense if you are used to RWS meanings. Just to give one example, the Three of Books/Wands, for example, shows a couple asleep, which feels much more to me like a Four of Swords moment. These types of depictions, coupled with the Court card issues definitely puts this deck into the category of Not For Beginners.

There are lots of delightful fantastical beings in this deck, like the adorable creatures in the Four of Chalices and Two of Spheres and the cute living tree in the Nine of Spheres. There are also robotic elements in the deck. The cards are full of variety and surprises.

There is a palpable feeling of flow when you look at the cards. They feel as though they are gently in motion. It really does feel like being in another world.

How it Reads
My first draw with this deck was the Knight/Griffin of Wands, which indicated lots of activity in the sun. I spent the day weeding in the backyard, so that was spot on.

The next day I drew the Four of Swords and Wheel of Fortune. The Four of Swords is more often than not my "relax in the bath" card. So these cards were telling me to relax from a LOT of recent activity.

Next I drew the King/Dragon of Books/Wands, and it didn't really make much sense for my day.

The next day was the King of Swords, Knight of Books/Wands and The World. I had just vented to a friend about having had to open a Paypal claim against an unresponsive seller regarding a damaged product I received. The King of Swords was Paypal (the objective, impartial judge), the Knight of Wands was my fury about the situation (having been ignored by the seller for so long), and the World was there to tell me that everything always works out for me in the end. The cards were reassuring me that everything would eventually be okay. (It was... I ended up with a full refund from Paypal.)

The next day I drew a few cards, where the Three of Books/Wands (mentioned above, with a sleeping couple) actually did represent a place where people sleep. So the card image, rather than the RWS meaning, was what I used in my reading. But the outcome card didn't end up making sense in the situation.

I asked a yes/no question from this deck, and got a clear Yes answer, but later found out the answer was no. So that was a miss.

As beautiful as the imagery is (and it really is so beautiful), I didn't really connect with this deck. So at the end of my week with it, I asked it "What do I need to know right now?" And it gave me the King of Cups (one of those blasted Dragons!). I laughed and took this to mean that I was not meant to connect emotionally with this deck right now. Then I asked if the deck had any parting words, and I drew the Queen/Phoenix of Swords. Ha! Another Court! So I asked, "Is this just not the deck for me right now?" and I drew the Queen/Phoenix of Books/Wands - I kid you not! It shows a phoenix in flight, and I heard "Take off!" What a very cheeky good-bye to this deck! At least it had a good sense of humor!

The LWB
This deck has one of the most interesting Little White Books I've seen. On the first page: "Imagine a Fantasy World where there are 3 Gods (Knowledge, Creativity, War) and 3 Goddesses (Magic, Receptivity, Love). Each of these Gods/Goddesses manifests in a different form (or put another way, show us a different facet of their being) in the three planes: Material, Intellectual, Spiritual." The book then goes on to separate the Major Arcana into these six categories, with each category having a Material, Intellectual and Spiritual card. For example, the Goddess of Magic appears as the High Priestess (Material), Hanged Man (Intellectual) and Star (Spiritual). The Material, Intellectual, Spiritual assignments are found in the Meanings section of the LWB. The God of War appears as the Chariot, Death and Tower. There are three cards unassigned by a God or Goddess, but fall under the Seeker diety (Magician, Wheel and Devil). This category of cards has "no shape, no focus, except that it's different from the others and it's looking for something more, something outside, something forgotten or not yet discovered." The Fool is not included in these groupings at all.

Another interesting facet of this LWB is a section titled "Advanced Study". Each numbered Minor Arcana card is given an invisible "court aspect" where it is assigned a court card. This section tells you how to calculate the corresponding court card. So for example, the 7 of Wands is associated with the Griffin (Knight), giving you another optional layer to your reading with the Minors.

Next is a 6-card spread called "The Epic Tale of Your Life".

Each card in the deck (except for the Fool) is given a title. The Moon is "The Maiden Behind the Mirror". The Ten of Books/Wands is "The Book Compels".

The book can be helpful when looking for answers when a card doesn't seem to match your inner meaning for it. For example, most of us see the Ten of Wands as a card of burden. The card in this deck is very different. "When all aspects of yourself are integrated, you can see the whole story from the points of view of all of the characters. You can also see that there is really no end of the story, so you keep writing." In the background of the card are all four court animals, bringing home the idea of looking at a situation from all points of view. While this still doesn't fit with the RWS meaning, the LWB excerpts at least help you understand what the images are trying to convey.

Final Thoughts
This is definitely not a deck for beginners. But if the imagery calls to you, and you are open to reading purely intuitively, it really is a gorgeous deck. It didn't work as a tarot for me. I think it might read better as an oracle deck than a tarot, and I can see it being fabulous for storytelling type readings!

Deck: Epic Tarot (by Riccardo Minetti and Paolo Martinello, published by Lo Scarabeo, distributed in the US by Llewellyn.)