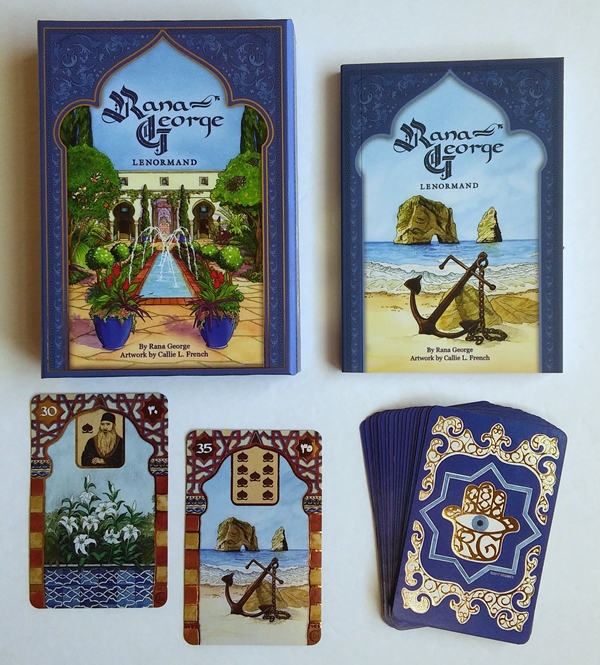 Rana George Lenormand is a sumptuous, self-titled deck created by a seasoned Lenormand reader, published by US Games Systems Inc. The exotic images are inspired by old world Lebanon and Rana George's memories and heritage.


The Cards
There are 42 cards in the deck, each measuring 2 1/4" x 3 1/2". The cardstock is a bit stiff when you first get it, but fluffs up a bit with regular shuffling (like the Dreaming Way Lenormand). The box is very nice. It opens on the side magnetically, and houses the cards in two separate grooves. The book lays on top.

The cards have gold embossed highlights, on the fronts and backs, which is really beautifully done. The borders are really pretty. I'm not a fan of borders at all, but these (which look like ornate columns) are quite atmospheric and work really well with the theme of the deck. Another thing I usually don't like on my Lenormand cards are playing card inserts, but the ones on these cards are incredibly gorgeous, especially the court cards, which absolutely blew me away with their beauty. Just stunning! The backs feature an ornate design surrounding a Hamsa.

In the upper left corners are the card numbers, and in the upper right corners are what look like Arabic lettering/numbering, but I am not certain.There is no mention of them in the book.

A traditional Lenormand deck contains 36 cards. This one has 42. There are two extra people cards. The two I keep in the deck are the ones with more of a gypsy vibe. The other two are more modern. The two sets are numbered the same.

In addition to the spare Man/Woman cards, there are four extra cards included in the deck. I am a traditional reader, so as pretty as these extra cards are, I have pulled them out of the deck. I don't use them in readings. They are titled Spirit, Incense Burner, Bed and Market. Even though I don't use these cards, I desperately want the Bed card to be my bedroom!

The celestial cards are so gorgeous (Stars, Sun, Moon). My favorite card is the Stars card, with that gorgeous purple sky! Another favorite is the Bed card, which is a shame because I don't read with it. I am also very drawn to the Letter card. I love the red curtain backdrop and the handwritten letter and envelope.

There are a couple of cards that feel off to me. The Bear looks really weird. It does not anatomically look like a bear. And one of the extra cards (Spirit), although a really cool looking card, doesn't feel to me like it really fits in with the vibe of the rest of the deck, but I don't use it for readings so it is not an issue.

How it Reads
For my first reading with the deck, I drew Lady + Cross + Whip. I had a recurring toothache that day. Normally, a toothache would come up as the Scythe. But the Cross also indicates pain (though usually back pain). So that was a little strange, but I went with it, chalking it up to breaking in a new deck. The Whip indicates something repetitive, and this is a pain that comes and goes with me.

The next day, I drew Key + Book + Anchor. This was the day I made the decision to take a certification class that would advance my work options. The Key was my finally deciding "yes". The Book was the studying/class itself. And Anchor illustrated my commitment to staying put in this job for the time being.

Birds + Fish + Rider came up the next day, which I assumed meant receiving worrying financial news, or two pieces of money news. Neither happened that day.

The next day was Man + Child + Key. My hospice client's daughter was visiting from out of state, so that was an accurate draw.

One day I drew Rider + Birds + Tree. A few hours later, I received a letter in the mail regarding my health insurance that I had been stressing about for some time. Rider = news/mail delivery. Birds = my stress. Tree = health (insurance).

The last day with the deck I had a very poignant reading. I drew Scythe + Clover + Cross. When I am reading about work, Scythe has been the card that comes up to represent my clients (hospice patients). In this case, it sadly also represented the Grim Reaper's scythe. My client died that day. Clover is a blessing, which may seem odd in this situation, but when someone is suffering, passing is indeed a blessing. And Cross was him crossing over to the other side.

My readings became clearer the more I read with the deck. I find that with Lenormand decks, it takes me a few readings to connect. I wonder if it is because I am so deeply in tune with my own Lenormand deck that it takes a bit of getting used to other ones now.

The Book
The 124-page bound booklet has a nice thick, smooth cover. There is a brief 3-page introduction by the author, and the rest of the book is devoted to the card meanings. No spreads, no superfluous ramblings. I love how the book gets straight to the point.

There are no images of the cards in the book. Each card passage begins with a sentence or two about the card image. Following this are a few quotes relevant to the card. Next is a paragraph titled "In a Reading" which tells you what this card means when you draw it. Then there are 1-3 quick sample readings where the card falls in a spread. Lastly, there is a paragraph in italics that gives more detail on the card image, often sharing background information on the details behind the imagery.

Here is an excerpt from the book. It is the full passage for the Garden card:

This sumptuous garden is strikingly inviting with its gorgeous architecture and abundant riches.

"He who is unable to live in society, or who has no need because he is sufficient for himself, must be either a beast or a god." - Aristotle

IN A READING
The Garden represents a group of people, a gathering, party, convention, big meeting, get together, an event, or society and the public in general. The Garden also talks about networking, playing the field, club hopping, or just being outside en plein air.  It is also about groups, associations and clubs.  The Garden brings in the factor of multitude and many, as well as wanting more.

Question: Should I stay with Chris?
Birds + Garden
Answer: No, have fun and look around.

Question: Why is Tarek not calling me?
Book + Dog + Garden
Answer: Because he is secretly seeing other people.

THE RANA GEORGE LENORMAND GARDEN
This lavish garden is an homage to the Beiteddine gardens.  It is also reminiscent of the Arabian Andalusia Gardens where there was always lots of music and belly dancing. Poets would get together and compete on who could recite the best rhymes.  That little blue dragonfly in the pool was my friend every time I would go out to swim in our pool. Somehow Callie got the look of our pool including the single sprinkle water fountains going in it, all without ever seeing it or knowing about it.

(If you are not yet familiar with Rana George, she also has a full-sized book on fortune telling with Lenormand cards titled The Essential Lenormand.)

Final Thoughts
This deck is exotic and rich and colorful. It is a treat for the senses. The details are exquisite. It's a beautiful deck. It's a great choice if you want to get into the whole gypsy vibe when reading for others. It takes you away to a different place, far from the modern realities of daily living. It makes mundane readings a little more special... sort of like breaking out the good china to eat a peanut butter sandwich on. There's no reason to save the fancy stuff for special occasions. With this deck, you can treat yourself anytime!