Oracle Deck Review: The Oracle of the Innocent Heart 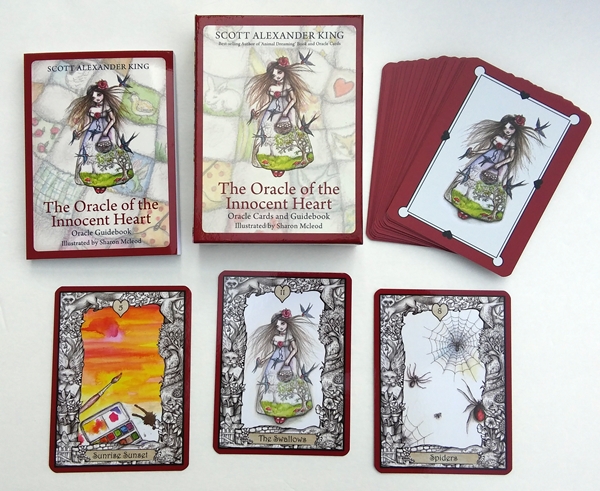 The Oracle of the Innocent Heart is the sweetest deck, created by Scott Alexander King, illustrated by Sharon Mcleod and published by Animal Dreaming Publishing.

The Cards
The 45 cards measure 4 1/8" x 5 1/2" and have a glossy finish. They are flexible enough to be shuffled vertically for those, like me, who find it difficult to riffle shuffle large cards in the usual, horizontal manner. The backs are not reversible, but the deck isn't meant to be read with reversals. The image on the back can also be found on the card titled The Swallows, a girl with flowing hair, surrounded by swallows, wearing a gorgeous picturesque dress.

You may be surprised to hear what I have to say about the borders. If you have followed my reviews, you will know that I prefer all my decks to be borderless. I don't like borders, especially intrusive ones. These cards have a deep red border, and inside this is a thin black border, and inside that is a huge illustrated border. The illustrated borders are busy and take up a good portion of the card. But I don't mind them! More than that, I find them charming. I like them! They fit very well with the theme of the deck. And they are black and white, so they aren't overly distracting, if you can believe it. They sort of provide a background ambiance. I like the contrast of the outer red borders with the black and white illustrated borders.

The cards and book are housed in a very nice, sturdy box with a lift-off top. The top has half-circle cutouts on two sides for easier lifting.

The deck comes with a surprise twist. It illustrates (and the book elaborates on) slices of life from the point of view of a fictitious seven-year old girl named Saffron who has a five-year old brother named Oddley. This is such a darling idea, and it makes the deck ever so much more enchanting.

Some cards are busier than others. Some have very simple illustrations on the cards, with ample empty white space, while others fill up every bit of the card with a myriad of images in a single card. Some cards are filled with color (the most colorful card being the gorgeous Sunrise, Sunset card), but most just have splotches of color here and there. I love it all. I love the contrast.

I love that the Spiders card is #8, because it discusses, among other things, how spiders relate to good luck and the number 8, due to its eight legs and (usually) eight eyes. The placement in the deck was genius.

There are a LOT of animals in the deck, with birds taking the lead by far. There are far too many animals to list, but a few include the koala, spiders, sheep, rabbits, bugs, deer, cats, horses, a unicorn, bats... and on and on. There are ten cards with birds in the title, and many, many more birds featured throughout the rest of the deck. There are two fox cards and a Little Fox Girl card. One of the fox cards is called Mr. Todd, and is about a very particular fox. The one titled The Fox revolves around a scene featuring the fox in the book The Little Prince. The Little Fox Girl reminds me of a Kitsune, though she is not labeled as such in the book. The Little Fox Girl is a character in a dream of Saffron's.

I love the cards featuring items such as The Cuckoo Clock, The Old Rusty Key, The Quilt, The Tyre Swing, The Apple Tree, The Wishing Well, Love Letters and The Nest. So many of these things bring me right back to my own childhood.

I find it amusing that the Grandad card is portrayed by a rooster (who reminds Saffron of her grandfather) while the lovely Grandma card features an illustration of the children's grandmother from her younger days when she was a Flapper.

There are a lot of fun, magical cards like The Gypsy Wagon, featuring a gypsy tarot reader (my fave!), Halloween (with pumpkins, bats, a black cat and a little witch girl flying on a broom), Magick, Faerie Stone, and Faerie Cats.

The image on the gorgeous Mask of Sorrow card calls to my Scorpio soul, while the Regret card adds a sprinkle of melancholy that you can't deny is a part of childhood and life.

The only thing I would have liked to have seen was a card titled Saffron, as there is an Oddley card.

The deck includes such a vast array of both simple and magical childhood experiences, encompassing many different emotions in the process.

How it Reads
For my first reading with the deck, I drew The Little Brown Hen, which speaks of how abundance isn't just found in money. How "having enough" is a form of abundance. It's one we rarely acknowledge in our never-ending quest for "more". It is also about resourcefulness and self-sufficiency and sharing and using one thing to make another. To value what you already have will ensure you never run out. And lastly, it reminds us that the things of real value can't be bought. Like love and laughter.

Then the next day, I drew Spiders which talked about money, abundance, good luck and success. And as synchronicity would have it, spiders were appearing everywhere for me that week (in cards, songs, real life, on my Instagram feed)! So I was pretty overjoyed to read the passage that went with this card.

The next day I drew The Tooth Faerie which talked about true wealth being love, not money. This card is about saving but also spending on something your heart desires. And how abundance comes when you realize that true wealth lies in loving who and what you already have in your life. Money is attracted to one who already feels like the luckiest person in the world.

On the fourth day, I drew the Little Brown Hen again! I was being guided to embrace abundance here and now and that love, support and laughter are the greatest forms of wealth (all of which I am rich in).

On day five, I drew Sheep, with the message of going your own way. I was given the message: "Don't blindly follow the herd like sheep. If you follow, know why you do so. Trust in your own authenticity." I've always been a non-conformist. It isn't always easy marching to the beat of your own drum, but it has always been for my best. Also, there's nothing wrong with being part of a huge herd, as long as your heart and soul know you belong there and want to be there.

And the next day, I drew... The Little Brown Hen! For the third time that week!

My last draw that week was The Gentle Hart. I was feeling down and sad the morning I drew the card which would reflect my mood. This card is about sadness, feeling lost and not your whole self. But it is also about the sweetness found in sadness. The little things you notice when you're sad that you are usually too busy to notice. Sadness can bring you into a space of greater awareness. And when you have had your fill, positive imagination can pull you back to a less painful/hopeless place, back to where you feel more empowered. It's okay to feel sad. In fact, a good hearty cry is cathartic and healing. Life is just ups and downs, all of which you have survived. This card came up for me at the perfect time. It let me know it was okay to feel sad and that this too would pass.

Of my seven daily draws, five of them were about abundance and money, with a single card appearing three times! And as it turns out, less than a month later, I unexpectedly interviewed for a job for the first time in almost 20 years of being a stay at home mom! The cards were gently preparing me for re-entering the world of paychecks before I even saw it coming!

This deck reads less like a form of divination and more like a return to childhood values and perspective. It has you looking at life through a different lens than what we are used to as adults. It returns you to a simpler time and from there you can see your situation differently.

The Book
The 176-page book that comes with this deck is so brilliant. It is written from the viewpoint of a 7 year old girl! It is so very enchanting. I love it to pieces! It's a really nice bound book.

There is a Table of Contents at the beginning of the book which lists the cards in numerical (not alphabetical) order. The Introduction begins by telling the reader what sets this deck apart from all the other oracles. Then there is a section on Saffron Melancholy and her little brother Oddley Gray, the fictitious main characters around whom this deck centers.

Next is a section on how to read the cards, with 4 spreads:


The spread titled Saffron's Animal Friends Spread is especially interesting, as you look for the first animal that catches your eye in each card, and that animal is the one who walks with you through each position in the spread. Most cards have animals in them, and if not, the borders do.

There are a few pages dedicated to each card. Each passage begins with a small black and white image of the card, followed by the title and one-sentence quote or key phrase. Then the narrative for the card is given from the Saffron's point of view. This, as I have mentioned, is absolutely adorable. It is the most unique take on a deck book I have ever seen. It is written in conversational tone, as a child would talk to you. It is so refreshing and really captures you and brings you into alignment with the spirit of the deck. Each passage ends with "Thoughts to Ponder" with a list of key things to remember about the card's message.

The book ends with a page each on the writer and artist.

Final Thoughts
This really is the sweetest, most darling deck. It evokes the innocence and wonder of a natural childhood. It is such a unique deck, really one of a kind. There's nothing else like it out there. If you ever feel overwhelmed by too much adulting, you can turn to this deck and return to the world of a child. It allows you to step back and look at things from a more open and naive perspective. Sometimes we overthink things. These cards help us remember what it is to just feel things as they are. It's a return to a simpler time. And it offers a fresh perspective from which to view our issues.

Deck: The Oracle of the Innocent Heart, by Scott Alexander King, illustrated by Sharon Mcleod, and published by Animal Dreaming Publishing.