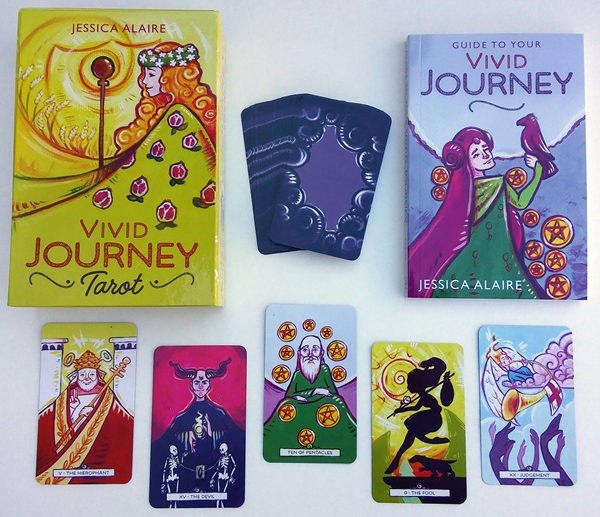 The Vivid Journey Tarot is a bright and cheerful deck by Jessica Alaire. The artwork is so wonderfully unique and whimsical, there is so much to love about it!

The Cards
The cards measure 2 3/4" x 4 5/8". The backs are reversible. The cardstock is new for Llewellyn. It's very thin, and shuffles so easily. I really like it. The cards even smell good! They have a sweet, almost fruity-woodsy scent to them, instead of that strong chemical scent you sometimes get with a new deck.

The cards are borderless! Yes! Thank you, Llewellyn! Seriously, I cannot emphasize how thrilled I am that this deck is borderless. It's one of those decks that, if it had borders, and someone cut the borders off, you would say, "Wow! It looks soooo much better without borders!" So I am very, very grateful (almost ecstatically so) to Llewellyn for this brilliant decision.

The suits are somewhat color coded. Yellow runs strongly through the entire deck. The Minors are a mix of yellow, and the suit color. (Wands are red/yellow. Cups are blue/yellow. Swords are purple/yellow. Pentacles are green/purple/yellow). Sometimes the Pentacles cards have more purple in them than green. I would have liked to have seen them more green, so that they would stand out in a reading as obviously as the other suits do.

The artwork is so vibrant and cheerful. But it's not an overly saccharine cheerful. It feels like cartoons for grown-ups. There is a little bit of female nudity in the deck, so whether this is one for the kids will be up to the individual. It's difficult to put into words what feelings the cards evoke. I feel happy just looking at the artwork. It feels comfortable and safe, approachable, simple and calm, yet at the same time, fun and energetic. It just feels good to do a reading with these cards.

There are so many cards that I love in this deck, I could just go through each one oohing and aahing. I absolutely love the wonky angles of the Tower and Moon. In fact, the wonky Tower was one of the first cards I saw from this deck, and that card alone made me want to have this deck. I have a thing for that style of art.

I love the thick-legged women in this deck. It's an aesthetically pleasing change of pace. The Pages are usually some of the most boring cards for me in a deck. But in this deck, they are adorable. I love their puffy outfits. It really makes them endearing to me, rather than feeling boring and static like they usually do. The Hierophant feels more like a nice, friendly, approachable Santa type than the usual scary religious dictator.

The Three of Swords is the card that I am most torn about in this deck. The artist has gone with purple and yellow as the color theme for the Swords suit, and the heart in the Three of Swords is yellow. Yellow! Oddly, I am both fascinated and put off by this. I like the way it looks when I see it, from an artistic point of view, but darnit if I don't just want that heart to be red at my core. It looks wrong, somehow, not being red.

There are some cards where the figures are undefined silhouettes (see the Fool in the top image above, the Five of Wands and Two of Cups below). It adds an interesting element to the deck, since it's only a few of the cards that have this. I especially love the effect of the stark black silhouette against the colorful background in the Fool card!

The Strength card is just gorgeous. I love the hidden, hooded figures in the Magician and Hermit cards. The Death card is fabulous! The Hanged Man feels very zen. Even a card as simple as the Two of Wands really captures my eye in this deck. The lines of the artwork really draw me in. I love the gravity-defying hair of some of the women in the deck, like the one in the Ten of Wands.

How it Reads
My first draw with this deck was a daily draw, and it was the Queen of Cups. I drew it in conjunction with an oracle card titled "Changes", and together the cards reminded me of the Wayne Dyer quote "When you change the way you look at things, the things you look at change." The duo reminded me that I am actively working on changing how I think and feeeeel about things, my emotional reactions to external situations, so that I can deliberately steer myself where I want to go, instead of always being in reaction mode. It was my first card drawn from the deck, and I fell in love, because of the added detail of the mermaid silhouette under the water. (You can see the card in the photo at the bottom of this review.) The same queen showed up a week later in a reading as what I need to outwardly show.

Next, I used the deck to do a Law of Attraction reading (here), and the cards were just so spot on. The reading made perfect sense, and the cards even illustrated the situation perfectly. In the position of how to raise my vibration, the Seven of Wands appeared, and he is literally standing in a higher position than the others. Even the Devil falling into a position I didn't expect to see him in was amazing because I saw him like I had never seen him before. As soon as I turned over the card, I heard a phrase in my head about him that I had never considered. I didn't need to sit there and wonder what the heck he meant in that position. It was clear the instant I turned the card over, and it was a take on the card I had never had before, which was brilliant.

(A week after that LOA reading, the Seven of Wands came up again in my daily draw, and it reminded me of what I needed to take away from that reading.)

One day I did a reading about whether or not I should make a particular purchase, because that morning I had drawn from two different decks a warning about making a bad purchase. I drew a card for the outcome if I did buy it (Ace of Pentacles), and another card for if I didn't (Ten of Pentacles). They were both good cards. Yeah, I would have more money if I didn't buy it. You always have more money if you don't buy something. But I didn't want that to be the only deciding factor. So I put the cards back into the deck and shuffled, drawing another card for what I should consider. I drew the Ten of Pentacles again! The deck literally threw one of the cards back at me and said I should seriously consider not buying it. So I considered it, but I really wanted it, so I ended up in a discussion with the seller, who was so friendly and kind (good customer service goes a long, long way with me), and I ended up making the purchase. In the course of the conversation, she offered me free add-ons to my purchase in exchange for a review. The Ace of Pentacles became the Ten of Pentacles! I ended up with the thing I wanted, plus money saved from the extras that I would have ended up buying later. Had I not been cautious about the purchase, I would have only had the Ace, not the Ten. Beautiful!

One day I had nothing to do a reading about, so I asked a silly question and got a silly answer. Are we going to win any money in the lottery tonight? King of Pentacles. "You're going to win ALL the money, you rich bastard!" Ha ha ha ha ha! Not one single number was a match. My cards are notorious for telling me I'm going to win millions in the lottery. It's kind of like our little inside joke. This deck apparently likes to play too.

I did another couple of spreads, which will take too long to explain here, but the cards were always on point, completely relevant to each position and easy to understand. So it has been my experience that these cards read very clearly and precisely.

The Book
The 192-page book has glossy paper and full color images. It begins with an About the Author page, followed by a very brief Contents page (listing only the five sections in the book: Introduction, Tarot Basics, Major Arcana, Minor Arcana, and Conclusion).

The 3-page Introduction contains the author's views on tarot and reasons behind creating this deck.

The card meanings take up the bulk of the book. Each card is given a 2-page spread. On every left page is a full-color, nearly full-size image of the card. Underneath the card image is the title, and the start of the text, which continues on the right side. Reversed meanings are given for each card. The book meanings are detailed enough for a beginner to start out with.

In the midst of most of the card meaning descriptions (either the upright, reversed or both), the author poses several questions to ask yourself, so you can really embody the message of the card. For example, in the Three of Swords, she talks about the rain symbolizing the need for releasing tears, and asks, "Do you fight painful emotions? Could you benefit from feeling your emotions instead of burying them?"

The book ends with a one-page Conclusion, followed by a Llewellyn ad.

Final Thoughts
This deck is a fabulous all-purpose deck. It could easily be used as a beginner's deck, as it follows RWS closely. And for seasoned readers, the deck provides a fun and vibrant twist to the norm, while maintaining the integrity of the RWS system. I absolutely love the whimsy of the artwork. It is definitely one of my new favorite RWS clones.