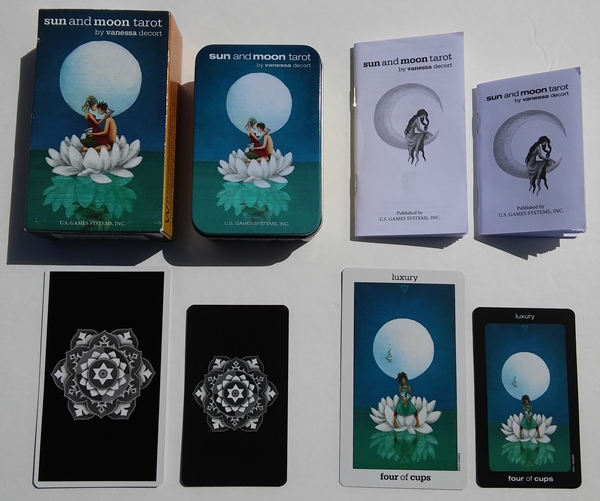 The Sun and Moon Tarot now comes in two versions! Woot! The original and now, in a tin!  I wrote a full review on the original deck here. In that review, back in 2010, I wrote: "Perhaps one day U.S. Games will make the Sun and Moon Tarot in a Tin with the same card stock as the other "tin" decks. I'd be all over that!" Fast forward 7 years, and my wish has come true!

The major difference, other than the size, is the borders. The original has a white border and the tin version has a black border. The black borders were at the artist's request.

I prefer the white borders of the original deck. It gives the deck a much lighter feel. The black borders add a darkness to the feel of the deck, especially on the darker cards. The contrast is nice against some of the lighter cards, but for the most part I feel the black borders make this deck feel too dark.

The borders are thick on both decks, and with the size of the tin deck already being smaller, the thick borders make the images even that much smaller. There are some cards where the details are harder to make out in the smaller version.

The back designs only differ in that the original has a white border, and the tin version has no border.

The original version has much thicker card stock (my one complaint about the original deck). The Tin version is much easier to shuffle.

The original comes in a regular cardboard tuck box. The tin version, obviously, comes in a tin. I don't know anyone who isn't a fan of the US Games tins! I still think they're genius, after all these years.

There are a few slight changes to the LWB. Some of the wording was changed and a few sentences were added (giving richer detail) to the following cards: Magician, Empress, Emperor, Lovers, Chariot, Hermit, Strength, Star, Universe, and Ace of Pentacles. The wording of the author's bio was also changed a bit. You can download the new LWB here.

For me, there are pros and cons to each deck. In my perfect world, they would be borderless in a tin. Or have thinner white borders in a tin. For the look of the cards, I definitely prefer the original. But for usability (shuffling) and portability, the tin version is more accessible.

Sun and Moon Tarot: Original and in a Tin.