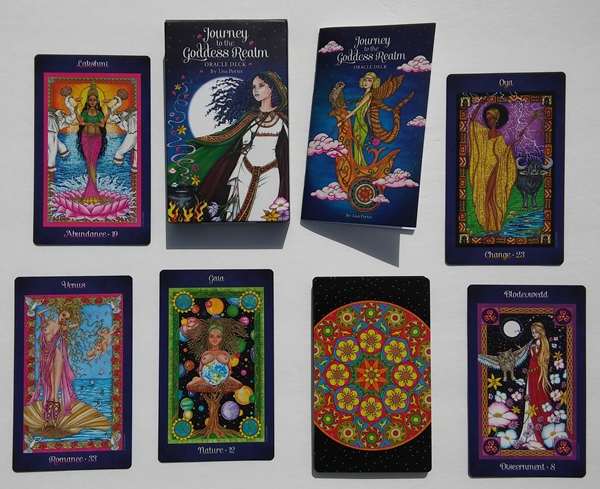 Journey to the Goddess Realm is a gorgeous deck filled with goddess energy from all over the world. This is my absolute favorite goddess deck. I love the artwork, diversity and empowering female energy.

The Cards
There are 39 cards, including 36 goddesses and 3 "Confirmation" cards. The cards are large, measuring a bit over 3 1/2" x 5 3/4". They're quite tall. They're too tall for me to shuffle regularly, but luckily the cards are flexible enough to riffle shuffle vertically. They are matte and have reversible backs, though the cards aren't designed to be used with reversals.

The three Confirmation cards (one shown at the bottom of this review) do not feature goddesses on them. They are titled Negation, Affirmation, and Revelation. If one of these cards shows up in a reading it will influence how you read the goddess card closest to it.

There are effectively three borders on each card. As much as I despise borders, this really doesn't even bother me, because my focus immediately goes to the gorgeous goddess. There is a thick dark blue border on each card. Then an inner border of another color (differing on each card). And then another border inside that one, this one made up of a design (also different on each card). Some of them are just design, but others are really interesting. For example, the inner border on the Freya card is comprised of runes. Kali's inner border is made of fire. Gaia's inner border feature roots coming from the bottom of the tree on the card.

Most of the cards have a repeating symbol in all four corners, relevant to each goddess. Venus has four doves. The Amphitrite card (a mermaid) features crabs. Baba Yaga has what look like Russian nesting dolls (so cute!). Lilith has apples, eaten to the core. Ha!

I love the diversity in this deck. There are goddesses from all over the world. I believe it's the most diverse goddess deck I have seen. There is some nudity throughout. I think there are six cards which show breasts.

A lot of the goddesses in the deck are inhumanly tall and thin. This is obviously not meant to represent an ideal body shape; it is merely the style of the artwork. There are some older women in the deck as well. One of my favorite cards is Baba Yaga, a magical plump grandmotherly type flying through the air in a mortar, using a pestle as her oar. You just know she walks her talk and no one messes with her. The confidence oozes out of her!

Mary Magdalene is one of my favorites, it's such a beautiful, peaceful card. Lilith is amazing with her fierce woman power. I love Tara zenning out with the rainbows. Kali is a favorite anywhere, and this deck is no different. I adore the mad energy of Mahuika in the flames. And Wuriupranili is just gorgeous!

There are many goddesses in this deck I had never heard of. I really enjoy being introduced to new representations of the divine feminine. There is one card, Hectate, which I had never seen spelled that way before. I have only ever seen it spelled Hecate. An online search turned nothing up. It is spelled this way in both the booklet and on the card. I have no idea why.

The goddesses included and their origins:

How it Reads
The first card I pulled from this deck was Mary Magdalene. I drew the card to compliment a tarot draw. The tarot reading was telling me to go toward a goal and not stop until I got there. So I drew a goddess card to see what energy I could harness to help me do that. Mary Magdalene (Identity) said that I should identify with the future me who has already crossed the finish line. Be her now. Because if I already identify with my desired end result, then the getting there is a sure thing. I drew this card on International Women's Day, and found Mary M. pop up in various other card readings on other people's Instagram feeds that day, from different decks! Her energy was abundant that day.

During the week that I worked with this deck every day, I had two repeaters. I drew Ishtar (Passion) twice that week and Hectate (Choices) two days in a row. Ishtar was popping up to tell me to get out of my rut. And Hectate was there to lend moral support because I hate making decisions.

Vesta (Home) appeared on a day that I was doing stuff around the house. Skadi (Endurance) came up on a day when I had to endure undesirable social interaction. And Lilith (Empowerment) came up to close out the week with a huge gust of woman power!

I have not had any of the Confirmation cards come up, though I have only used the cards thus far for single card readings. I have not yet used them in a spread.

I love asking what energy will help me in my day ahead. It's a great way to start the day, being able to harness the power of one of these amazing goddesses, knowing you have that energy within you all day. Whatever you are faced with, you can remember you are no mere mortal!

The Booklet
The 48-page booklet is larger than a typical LWB, as it is the same size as the cards. It also has a full-color cover on thick card stock. The inside pages are all black and white and have no images of the cards.

The booklet begins with an introduction to the goddesses. This covers a general definition of goddess energy and how they can assist us.There are no spreads given.

There is no Table of Contents, but the cards are listed in alphabetical order.

The heading for each card is the name of the goddess, and under this is her title. There is a paragraph telling you about the goddess and the meaning of the card. I really appreciate that there is a brief back story given for each goddess, as there are so many I'm not familiar with. This is followed by Keywords and then Shadow keywords.

At the end of the booklet, the three Confirmation cards are briefly explained. For example, if you draw "Negation", this prompts the Shadow meanings of the goddess card(s) closest to this card. I thought this was an interesting idea.

The booklet ends with an About the Author page and a blank page for notes.

Final Thoughts
I have had a few goddess decks that I have let come and go. This one has been my favorite by far, and will not be going anywhere! I absolutely adore picking a card and absorbing the energy of the goddess that came up for me. If you don't have this deck, you need it! It is gorgeous, diverse and packed with strong, fierce and feminine goddess energy!

Deck: Journey to the Goddess Realm (by Lisa Porter, published by US Games Systems, Inc.)