Tarot Deck Review: The Wonderland Tarot (in a Tin) 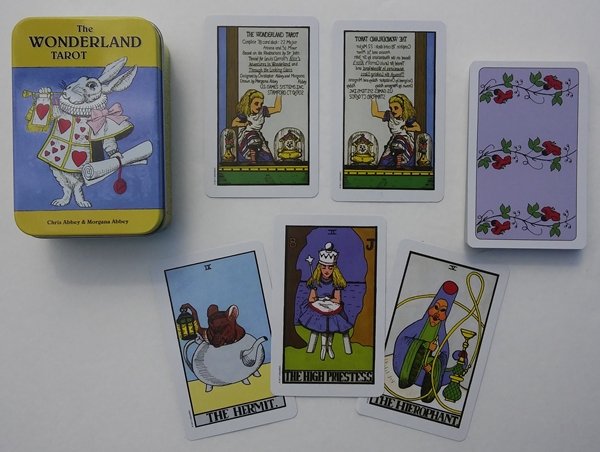 Oh. My. God. The Wonderland Tarot is the deck that has been on my wishlist the longest. It was sadly out of print for many years. I have wanted this deck for more than a decade. When I found out that US Games was reprinting it and putting it in a tin, I was insanely excited! It was literally a dream come true. This deck combines my love for tarot with my love for all things Alice. The artwork, of course, is a tribute to Sir John Tenniel's original Wonderland illustrations.

The Cards
The cards measure approximately 2 3/8" in width by just over 3 3/4" in height. The size and card-stock make it easy to shuffle. My deck came with a weird powdery film over the cards, but has gone away with use. The flowery backs are not exactly reversible, but it's close enough not to be able to tell reversals from upright cards at a glance.

The deck comes with two title cards, which are mirror images of each other (a nod to the Looking-Glass, I assume). The first card is read normally and gives the information on the deck (title, card count, artist and publisher info). The second card is a mirror image of that card, and can be read normally only when looking at it through a mirror. I don't know why I love this, but I really do. It's just something extra and special and Wonderlandy that wasn't necessary, but included for fun.

The Minor Arcana cards all have playing card attributes. This allows you to separate those cards and use the deck as regular playing cards. It is also a nod to the playing cards in the Alice story. The Pages are the Jacks, and the Knights are Cavaliers (following the French tradition in tarot and playing card decks, according to the LWB).

Where do I even begin? I can just go down the entire Major Arcana list, in awe of how the characters fit so perfectly with their cards.

Some of my favorites:

Some of my favorite Minor Arcana cards:
This deck really makes me want to get out my old copy of the two Alice stories and re-read them. The images in the Minor Arcana cards are not discussed in the LWB, so you do need to have read the books (Alice's Adventures in Wonderland & Through the Looking-Glass) in order to understand all the references.

There are some cards that feature characters or scenes that I don't recognize, like the brown rabbits as the Page of Oysters and Temperance, the lobster as the Hanged Man (though from the LWB it seems like the lobster is not from the actual stories), some of the court cards (sadly, the court characters aren't named in the LWB) and a few others. So I suppose I do need to brush up on my stories.

How it Reads
When I first got this deck, I used it every day for a week, reading exclusively on the same issue. Meaning, I only used it for the same issue, day after day, and I didn't use any other decks for that issue. It's something I had never done before, which was an interesting twist even to me, and I give credit to the wonky world of Wonderland for that.

Those readings were really on point and practical in their answers. Two days in a row I received the same card (both one-card readings), and receiving the same card for two different questions about the same issue was really a wonderful validation. One day I had a card leap out of the deck in answer to my inquiry, and it made perfect sense. Every single reading I did with this deck was clear from the get-go. There was no wondering what it meant, or how to interpret it. The answers came as quickly as I could turn the cards over.

Even though this deck is unconventional and obviously theme-specific, I can definitely see using it for any inquiry. It follows RWS closely enough to not need to know the stories behind the cards, yet knowing the background just adds more understanding. I am over the moon to have this deck as part of my regular rotation now.

The LWB
The LWB is 55 pages. It begins with a brief introduction to the deck, then goes right into the card meanings. The Minor Arcana cards are listed in reverse order for some reason. (King down to Ace). I find this unnecessarily confusing, as it makes it more difficult to find a particular card when your mind is used to going in ascending order.

The card images and characters are explained for the Major Arcana cards, but not the Minor Arcana, which only receive the standard LWB meanings. All cards receive both upright and reverse meanings.

The booklet ends with a 10-card Celtic Cross spread, an author's note and publisher's note.

The last words of the LWB are from Alice herself (apropos of this very deck): "Why, they're only a pack of cards, after all. I needn't be afraid of them."

Final Thoughts
Gah! I am so enamored with this deck. I waited so long for it, and it was well worth the wait, especially since now it is blessed to be housed in a tin! I am happy, happy, happy! If you are a Wonderland fan and a tarot reader, this deck is a no-brainer. If you haven't read the books, definitely go read them now! They are brilliant.

Deck: The Wonderland Tarot in a Tin by Chris Abbey and Morgana Abbey, published by US Games Systems, Inc.