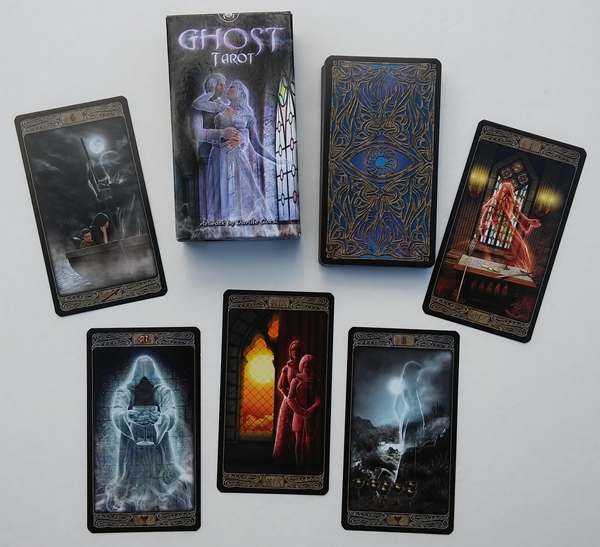 Ghost Tarot is a unique deck that features ghosts as the main characters in the cards. I was beginning my mediumship studies when I was called to it. I'm so glad there is a deck like this out there.

The Cards
The cards measure  2 5/8" x 4 3/4". They are the blessed standard Lo Scarabeo card-stock, which means they are matte and shuffle like a dream. The backs are reversible. The borders are a bit boring, and I think this is a deck that would be really beautiful with its borders trimmed off. If I find I will be working with this deck a lot, I will probably do that.

There are a lot of different aspects of this deck that make it unique. There are a few cards that feature couples, and in some of them, both subjects are ghosts, while in others there is one ghost and one person who is still alive, but interacting with their ghost partner.

There are so many gorgeous cards it's difficult to pick a few favorites to discuss. Death is a ghostly Grim Reaper in a very atmospheric card. The Devil is what appears to be a summoned demon within a pentagram. The Tower reminds me of something out of Harry Potter, with the wispy ghost lights spinning through the tower ruins. Justice is normally one of my least favorite cards in any deck, but the Justice card in this deck is gorgeous, one of my favorites. The High Priestess, on the other hand, is a strict-looking nun, which I don't like.

The Eight of Cups is gorgeous with the moon, the fog, the castle in the background, and the beautiful back of a female ghost. The Six of Swords features a woman and child in a boat steered by a ghost. Again, the fog in some of these cards really provide lovely Gothic atmosphere. I love the Ten of Swords which shows a ghost looking at his own freshly murdered body. The Six of Cups shows the sides of two houses, split down the middle. On the left are ruins of a stone house with cracked windows leading to a dark inside and a dead landscape. On the right is a yellow house with clean widows showing light inside the home and green grass. There is a ghost on the left side giving live flowers to a living girl on the right side. Very sweet.

The creepy kids avoiding daylight in the Sun card remind me simultaneously of vampires and The Turn of the Screw. The Ten of Cups is strange but makes me laugh every time I see it. It depicts a non-ghostly Grim Reaper gleefully leading an exuberant, romping parade of joyful ghosts. Death never looked so fun!

The Three of Wands is a ghost ship! Love it! Another gorgeous non-human ghost card is the Seven of Pentacles which features a ghostly grove of trees with green fog. There are four colored non-human wisps going around what looks like a mill wheel (a similar vibe to the Tower card) in the Wheel of Fortune. The Four of Swords shows a stone sarcophagus, and between the stones all you can see of the ghosts are three sets of eyes, which is creepy and interesting at the same time.

There are some cards where I can't quite figure out what the story is. In the Six of Pentacles, an old man is sadly hugging a gravestone. Behind him are the ghosts of a couple, embracing. It seems like it would be a memory, but my initial thought was that this is the Ghost Tarot, so they are ghosts, so the ghost behind him can't be the old man. It seems odd that he would be grieving a couple. Then I read this in the LWB intro: "Ghosts, in a certain sense, can be seen as the memory of the world, the expression of emotions, of desires, of incomplete journeys and interrupted potential. Whether they are entities, residues of energy, or psychological projections of the living and of the collective unconscious, we can never know." So I suppose the ghosts in this card could indeed be the old man's memories.

In the Eight of Pentacles, there is a woman (alive) in a wedding dress chiseling a headstone, while the ghost of a man reading a book stands in front of her. Did her intended die on their wedding day? Why is he reading a book instead of looking at her? I don't understand this one either.

There are a couple of other cards that are perplexing to me, such as the ghost wings on the living woman in the Eight of Swords. And the Ten of Pentacles shows what appears to be two ghosts trying to desperately appeal to the living couple in the Ten of Pentacles, almost seeming like a warning? The LWB says for this one: "A wedding in the submerged chapel only brings pain. Life is for the living, but they must also live it in the darkest of moments." Seems a strange Ten of Pentacles vibe.

The Aces all feature a ghost hand with its suit symbol. All the Court Cards are ghosts. I love the Knaves (Pages) in this deck! They are among my favorite cards. They are all wearing hooded cloaks, faces unseen, yet evoking powerful feelings. The Knights are all riding ghost horses. The Kings and the Emperor are rather boring and all pretty much look exactly the same. The Queens and the Empress have a similar feeling, only slightly less monotonous.

I really like that there are several ghost animals in this deck. The horses in the Knight cards and Chariot. The dog in the Fool. The dog and wolf in the Moon card and the lion in Strength.

How it Reads
The Knight of Wands came up on a day when I was looking into astral traveling, and there couldn't have been a more appropriate card to represent that concept! The next day I drew the Ace of Swords, which I often relate to clairvoyance. As I mentioned, I received this deck when I began my mediumship studies so this was a very timely card to appear.

One day I pulled the Five of Swords and Seven of Swords as my daily draw, and two days later it was the same exact two cards, in opposite order. Amazing. Another day I drew a card that resembled my spirit protector as I had seen him in a recent dream.

One day the cards threw my question back at me in the most hilarious way. I asked a question of an intimate nature and the deck gave me the Ace of Wands. So the deck definitely has a sense of humor.

I find that the ghost characters come across as more approachable than a regular deck with live humans. But maybe that's because I'm an introvert and would probably rather interact with ghosts than people.

The LWB
The LWB is 63 pages, though only 16 pages are in English, followed by Italian, Spanish, French and German. The book opens with three quotes on ghosts and a brief introduction.

The card meanings are generally 1-2 sentences each and do not refer to the specific card images. No reverse meanings are given. The LWB ends with a 5-card spread.

Final Thoughts
This deck could have come off as really cheesy, and granted, there are a couple of cards that feel that way, but for the sweeping majority, this deck pulls off the ghost theme with flying colors. It is atmospheric and beautiful. (And the more I look at it, the more I really want to see it without its borders.) It would obviously be a great deck to use for spirit readings. It's also one that would be ideal to pull out at Halloween time. But I'm a Scorpio and my whole life is October, so I would use this deck at any time of the year.

Deck: Ghost Tarot, by Davide Corsi, published by Lo Scarabeo, distributed in the US by Llewellyn.