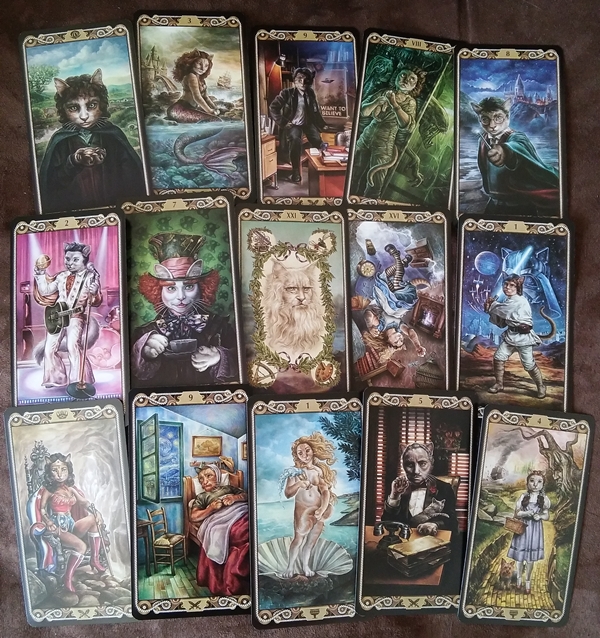 CatTarot is a delightful new deck featuring cats as iconic figures from both history and fiction. The moment I saw the first few images of this deck online, I fell in love. And while I am definitely a cat person, I am definitely not a cat-tarot person. I'm not a fan of most of the cat decks out there. But this one is so awesome.

The Cards
The cards are printed on the wonderful cardstock you know and love from Lo Scarabeo. They are the traditional Lo Scarabeo size (approx. 2 5/8" x 4 3/4"). The backs are reversible and feature mirror images of a cat-spin on Leonardo da Vinci's Vitruvian Man.

(The LWB lists the Two of Cups as "Catrie" Bradshaw from Sex and the City, but the deck comes with a card noting that there was a change to that card, as it now features Laurel and Hardy.)

The cards are varied in their characters, featuring both real and fictional characters, but the majority are fictional. The real people include artists, composers, actors, dancers, singers and historical figures. There's even a serial killer (Jack the Ripper, or Cat the Ripper as he is referred to in the LWB). The fictional characters include those from literature, television shows, movies, comic books and legends.

The LWB doesn't tell you the exact names of the characters the cards represent, but rather give you a cat name for them. For example, Elizacat Taylor, Cat the Fourteenth (you are expected to know it's referring to King Louis), Cyrano de Bergecat, etc. I could have done without the cat names and just had the real names listed. If you are unfamiliar with some of the references, taking a look at the French translations in the LWB will help (starting on page 39), as the characters are mostly referenced by their real names there.

There were some characters I wasn't familiar with and had to do some research. My daughter and I both misidentified the Ten of Wands. We both thought it was Christine Daae from The Phantom of the Opera. After some research, I found out it is Sissi, or Empress Elisabeth of Austria. I don't know anything about her story, so whenever I see that card, it will always be Christine Daae to me. I also mistook The Lovers' Don Juan for Casanova (an honest mistake!).

I know nothing about King Louis the Fourteenth (The Emperor), I haven't seen the movie Citizen Kane (The Magician), I haven't read 20,000 Leagues Under the Sea (The Hermit) and I'm not familiar with Asterix (Knight of Pentacles) although my son read the comics when he was younger. There are several more references in the deck that I had to look up to familiarize myself with the backstories in order to make the connection to the cards.

When you don't know the back story, some of the images can be hard to reconcile with the meanings. The Eight of Swords shows Esmeralda, and I am assuming this is from the Hunchback of Notre-Dame? She is shown dancing in a red dress. I am not familiar with the story, and from the image, she looks like a free spirit. Not at all the tied-up, bound, restricted, limited feeling I normally get from the Eight of Swords. So to reconcile this, I would need to either learn her story or use the card intuitively to mean something other than the traditional meaning. As another example, admittedly I don't know much about Zorro, but I do know he is known for slashing stuff up with a sword and leaving a Z behind. He is shown on a horse wielding a sword, yet confusingly he is not the Knight of Swords, but the Knight of Cups.

Happily, I was familiar with most of the cards' characters and was delighted by so many familiar and beloved faces. The image at the very top of this review includes my favorites. It was really hard to even select a top fifteen, because there are just so many great cards!  The artwork is so good that a lot of the time, I forget I am even looking at cats. And so many of the cats' faces actually look like their human counterparts. I am in awe of the artistry involved in creating this deck. The details are exquisite.

How it Reads
I wouldn't choose this deck for any old reading. I'd really have to be in the mood for this type of deck, as it is very unusual. The cards don't follow RWS tradition, as far as the illustrations go. (A couple exceptions are the Seven of Cups which has the usual imagery for that card, and the Fool is carrying a hobo sack on a stick.) In fact, the characters are mostly just looking straight ahead and posing. The images don't flow together as they are mostly static snapshots with no action. You will be working more with your knowledge of what these characters represent. Because of that, I would use this deck as more of an oracle than a tarot.

There are no Cups, Wands, Swords or Pentacles in most of the illustrations. None of the characters are doing RWS specific actions. For example, in the Six of Cups, Peter Pan is not presenting Tinkerbell with a cup, but the characters are just floating in the air. You are just meant to know how Peter Pan represents childhood, a major theme of the traditional Six of Cups card. The Seven of Swords, instead of showing someone sneaking around in the middle of the night stealing swords, is just a headshot of Johnny Depp's take on The Mad Hatter with a cup of tea in his hands. Nothing to represent the sneakiness. No action being taken. (And while it's one of my favorite cards in the deck, I don't really get a Seven of Swords vibe from The Mad Hatter to begin with.)

The Four of Cups shows Dorothy just standing on the yellow brick road and, if you are already familiar with tarot, you can easily tie that in with the feeling of dissatisfaction with where you are. But if you are new to tarot, there are many things Dorothy could be representing. So you will either need to already be familiar with the traditional RWS meanings, or use intuition/storytelling alone. Likewise, the Five of Cups is a sad card, but it simply shows a posing Count of Monte Cristo. He looks proud, not sad or upset. You really have to know the story to understand why he is representing the forlorn Five of Cups.

Once you are familiar with all of the cards though, it makes reading with them a real treat.

Most of the cards are spot on in their representation. Wonder Woman as the Queen of Wands. Sherlock as the King of Swords. Vincent van Gogh as the Nine of Swords. Scarlet O'Hara as the Five of Wands. Odysseus as the Six of Wands. Botticelli's Aphrodite (The Birth of Venus) as the Ace of Cups. Robin Hood as Justice. Peter Pan as the Six of Cups. Mozart as the Three of Pentacles. Fred Astaire as the Two of Pentacles. Superman as the Seven of Wands. Cinderella as the Ten of Cups. Jack the Ripper as the Devil. Dracula as Death. Alice in Wonderland as the Tower.

I found myself gleeful with the breadth of characters featured. There is a wonderful mix of old and modern. There are legends from Greek mythology (Zeus, Athena, Hercules) next to Fox Mulder from The X-Files. Leonardo da Vinci side by side with Harry Potter. Genghis Khan seated next to Ripley from the Alien movies. It's just so far out, I love it! It really brilliantly encompasses such a variety of characters. Although the majority of the human characters represented are Caucasian, the lack of diversity isn't as obvious as it is with most decks due to the anthropomorphism.

Reading with this deck somehow brought to my mind the phrase, WWJD? (What would Jesus do?), but here you can ask WWWWD? (What would Wonder Woman do?) or 77 other varieties of those initials. You can look at your inquiry through the eyes of so many different iconic figures. It makes reading really interesting and outside-the-box. You will get answers you normally wouldn't think of with a regular tarot deck.

I haven't done a Celtic Cross spread in years, but I was drawn to throw one with this deck. I found it really interesting seeing how the different characters came together as a gang. It worked really well in a Celtic Cross. It's a very fun deck to read with. It's like that game, if you could invite ten famous people to dinner, dead or alive, real or fictional, who would you choose, and what would that group conversation be like? Throwing down a handful of these cards is just like that!

Final Thoughts
This isn't a deck I would whip out for a traditional tarot reading. It's also not one I would recommend as someone's first deck. You really need to be familiar with all of the character's stories in order to comprehend what the cards are saying. That being said, I adore this delightful deck. (In fact, when re-reading this review before posting, I realized I used the word "delightful/delighted" four times, before editing. That's how you know how delightful something truly is.) The CatTarot is thoroughly enjoyable and wildly entertaining to read with and gives you new worlds and perspectives with which to view the situations you consult the cards for.

Deck: CatTarot by Carole-Anne Eschenazi, illustrated by Diana Cammarano. Published by Lo Scarabeo, distributed in the US by Llewellyn.