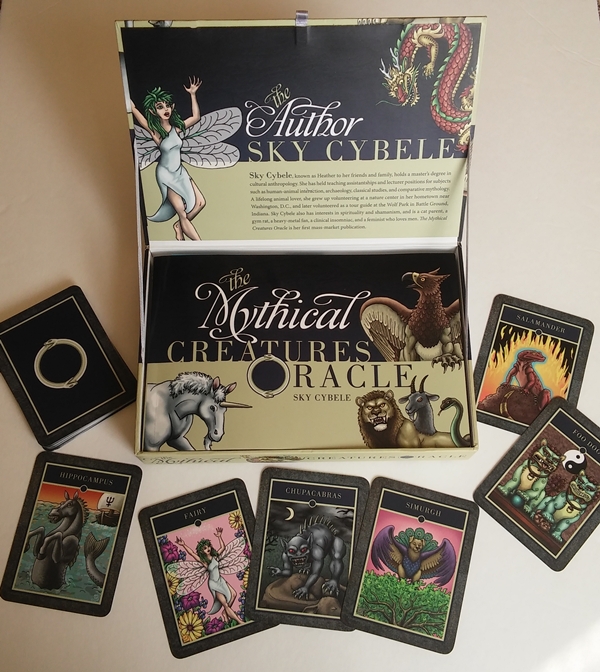 The Mythical Creatures Oracle is a unique deck and book set created by Sky Cybele. I have always been drawn to mythical creatures, and knew I had to have this deck. The artwork isn't the style I am normally drawn to, but I was more and more enchanted with its charm the more I worked with it. The accompanying book is a wonderful resource.

The Cards
The deck and book are housed in a large, sturdy box that closes magnetically. There are 44 cards in the deck, each measuring 3" x 4". The cardstock is nice and flexible, easy to shuffle. And the matte finish is wonderfully smooth and really pleasing to the touch. Unfortunately, on my first shuffle, a big chip peeled off one of my cards (Unicorn, see above photo, lower left corner of the card). I can see that with regular use this will happen more and more.

The deck features a vast array of mythical creatures, some of which I was familiar with, but a great many I wasn't. I love learning new things, so I loved exploring the new-to-me creatures. I also found some new information on creatures I thought I was familiar with. For example, I always thought of Sirens as water creatures, but according to the author: "In modern times, people often think of Sirens as ocean-dwellers, often confusing them with their cousins, the Mermaids. In Greek mythology, however, Sirens were originally said to be half woman and half bird of prey, rather than fishlike. These monsters dwell on three small islands in the middle of the sea called the sirenum scopuli." She goes on to say that they lure sailors who then crash on the islands and are ripped to shreds and devoured by the Sirens.

I really like how the cards feature both positive and negative creatures. This is a deck you can really use every day, because its meanings are far reaching. The cards can be drawn to describe either a situation or a person. They are very versatile.

The Book
The 160-page companion book is very informative.  It begins with a Table of Contents, listing the creatures in alphabetical order for easy reference. The next section is a background on the deck creation, including the reasons the creator chose the cards she did, and why she left out some of the more popular mythical creatures. She hints at the possibility of a second deck featuring some of the creatures that didn't fit in this deck. I'd love to see this happen! (Can I request a Medusa/Gorgon card, pretty pretty please?!) Then there is a brief list of the creatures and their keywords. This is followed by a section on how to use the cards.

Chapter One is about using the creatures as totems, including a list of the creatures and their corresponding occupations or social roles. This was fascinating, and touches on something I loved about the bulk of the book, which I will discuss more later in this review, about how the author ties the creatures to their human attributes. For example, under Kitsune, you will see the occupations actors and actresses, dancers and models. For the Sasquatch, the human roles are outdoorsmen, naturalists, park rangers and hermits. This is followed by a second list, with each creature being matched with their human personality traits. For example, the Jackalope indicates those with a strong sense of humor; jokers, pranksters and goofs. The Unicorn points to virtuous and righteous individuals, do-gooders and the devoutly religious.

Chapter Three is about dealing with monsters, listing the creatures that are purely negative (with no redeeming qualities) and those that bring both negative and positive qualities. This section also includes rituals to work with the monsters.

Chapter Four is about how to use the cards for divinatory readings. There is a 4-card relationship spread as well as an example of a freestyle method of reading, the number of cards depending on your situation in the moment.

The section on the individual cards begins on page 59. There is a large black and white image of each card. There are a good number of keywords listed for each creatures. This is followed by the creature's mythological background, which I loved. This is where you learn the origin of the creature, and how it sometimes has evolved over time, and where the creatures' tales differ in various parts of the world. This information is well researched, very informative and interesting. Then the author addresses the card meanings, both upright and inverted (reversed).

When discussing the card meanings, the author did something that I absolutely loved. She addresses who this creature would be if it were human, so you know who to look for when a card comes up. This was like a lightbulb moment for me, as I don't think I would have made those connections myself. It really expanded my use of the deck and make it much more expansive in readings. I can't say how much I appreciate this approach!

As an example, for one of my daily draws, I drew the Basilisk, which talks about wastefulness, carelessness and pollution, among other negative traits. The description relates this to someone who litters or doesn't recycle. It made me think about how to reuse-recycle more than we do now.  Another example is the Kitsune, who is all about cleverness and disguise (shapeshifting). So part of the description is to look for someone who is a social chameleon who can blend in with any crowd, someone highly likable, who may have undergone a personal transformation. It's like mythical creature profiling!

Another thing I like about the author's approach to the card meanings is how she looks at the reversed cards, as she sometimes uses the imagery to confirm the inverted meaning. For example, the description for the inverted Siren card begins: "With the Siren's cruel talons at the top of the image and her pretty face at the bottom, her true predatory intentions are exposed..." And the Plumed Serpent begins: "Where the sun is normally shown at the top of the card behind the Plumed Serpent's head, the inverted position places the creatures's bring mind at the bottom. This suggests an instance in which one has failed to use his intellect effectively..."

At the end of the book, there is a section that touches on 20 additional mythical creatures that were not found in the cards. There is a bibliography, and then the book closes with an index of key concepts, where you can look up an attribute in alphabetical order and find the corresponding creature. For example, if you look up Kindness, the creatures listed under that heading are Brownie and Kamadhenu. Under Fear you will find Chupacabras, Minotaur and Werewolf.

Final Thoughts
I thought I would really like this deck, but I found that I absolutely loved it! It is a well researched deck/book set. I learned so much from the cards that came up for me while reading with it. I have not read the book cover to cover, as I prefer to read about the cards as they come up in my life. I like having that learning to look forward to. I appreciated that my perceptions on some of the creatures were challenged, and I loved learning new things and perspectives on the creatures. I would definitely be on board for a sequel!

This deck could easily be used for every day reading, being very versatile and encompassing daily life as well as specific inquiries. I highly recommend it to anyone, for any reading purpose.