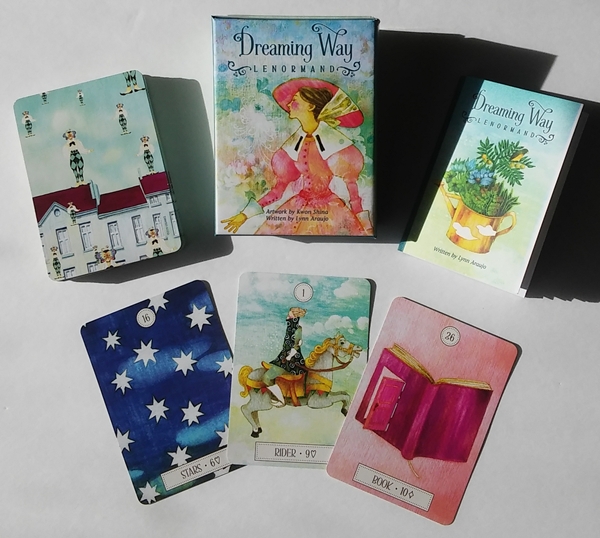 Dreaming Way Lenormand is the darling creation of Kwon Shina, the artist of the Dreaming Way Tarot (which I reviewed here.).

This deck is whimsical and enchanting. I love that the art gives the feeling of simplicity, without extraneous designs, yet it feels full and captivating and colorful. I love the artwork so much that this deck is easily in my top favorite Lenormand decks.

The Cards
The box that the cards came in was nearly impossible to open at first! It took me a really long time to get it open, as it doesn't have one of those little cutouts on the side. It closes completely. I made the mistake of closing it, and had to ask my son to open it the second time, and it took him awhile too. I kept the deck open after that, and loosened it up a bit. After awhile, it opens smoothly now.

The cards measure 2.5" x 3.5". They are very stiff. I do wish the cardstock was softer and easier to shuffle.

The back design doesn't really feel like it fits in with the rest of the deck. The image is of a row of attached housing with the figure of a masked woman repeated many times in the air and in front of the housing. I would have liked to see a simpler design for the backs.

The cards are borderless (yay!!!). And I really, really like the way the titles were done. I love the rectangular title box with the little dots lining it, and I absolutely love the font they used for the titles and playing card associations. It looks really nice with these cards. Similarly, the numbers of the cards are in a circle at the top of the cards, with the dots around it and the same font. Very nicely done.

There is one card whose title differs from traditional Lenormand. The card titled Choices in this deck is traditionally called "Crossroads" in other decks.

I love the whimsy in these illustrations. The House, Mountain, Sun and Tower are among my favorite designs.

There are some very interesting cards, like the Coffin card, which shows the bottom half of a girl in a sardine tin, halfway open. The Anchor is a tattoo on someone's wrist, bringing to mind a sailor. The Moon has a storybook feel to it, with a clothed rabbit sitting on the moon and doing something... at first I thought he was painting, but on closer inspection it looks like he is churning butter or using a large mortar and pestle. On the moon. (Upon reading the LWB, I discover that it is indeed a mortar and pestle, and the rabbit is conjuring magic.)

Another interesting card is the Clouds card. The clouds are depicted as steam rising from a cup of tea/coffee. The downside, for me, to this card is that there is no light/dark side to the clouds, as seen in traditional Lenormand decks. They are all pure white in this card. So you don't have the ability to see in a reading what is facing the dark and light side of the clouds.

The Fish is another whimsical take, with fish floating in mid-air under an umbrella. The Rider is riding horseback backwards, facing the rear of the horse for some reason. The Bear is actually a person wearing a Bear face mask.

At first, the Fox card really bothered me because I thought it was a fur stole. It reminded me of the minks my grandmother had, with the heads and limbs intact. As a vegan, the thought upsets me. But on closer look, and in reading the LWB, I realized that that fox is alive. So I'm okay with the card now.

While I never like to focus on the negative, for a well-rounded reading, I always like to discuss my least favorite cards in a deck. In this deck, there are a few, but they are minor annoyances.

The Dog card features a boy as well. They are equally front and center. I understand that this is meant to show that the dog can be trusted. But whenever I see this card, I see the boy first, and it seems to me like the Child card. I would have rather seen the dog by itself, for the sake of simplicity.

The Key card depicts a boring modern key. I would have loved to see how this artist would have drawn a funky skeleton key.

The Garden and Ring cards feel very similar to me. In fact, the Ring card feels more like a Garden card to me than the Garden card does. It doesn't feel Ring-like to me at all.

How it Reads
This deck really surprised me at first, because it would not read for me! I cannot remember ever having a deck that I could not read straight from the box, even ones whose designs I disliked, which was certainly not the case here. I adore the artwork in this deck, but when I first got it, for the first two weeks, all it would give me was irrelevant nonsense. I still don't understand it.

After a week of frustratingly useless readings, I ended up charging the deck on a large amethyst cluster. Still, after two days on the crystal, it would not read for me. I waited another week. Then, finally, inexplicably, it began to read accurately for me. It remains a mystery to me why this happened.

Once I got into the groove with this deck, it read beautifully, accurately and simply for me.

One day I drew Mountain + Dog + Ring. I have a friend who shows up in my readings as the Mountain card, as he is a big guy, and especially with Dog, I knew the cards were referring to him. Ring told me that he had a commitment/plans, so I wouldn't be seeing him that day. A welcome message for an introvert like me who isn't always in the mood to socialize.

The next day I pulled Tree + Book + Anchor. That day I got my son's lab results back, and it showed that his levels had stabilized. (Tree + Book = lab test results, Anchor = stable).

Another day, I drew Tower + Stork + Lilies. That day I received a package from US Games (The Deviant Moon Tarot book and borderless copy of the Deviant Moon Tarot deck). Tower + Stork = Delivery from a company. Lilies? Well, when my daughter opened the book and looked through it, she remarked with her 12-year-old chagrin and scrunched up face that there was "a lot of nudity". The Lovers card warranted extra face scrunches from her. I usually see the message of peace in the Lilies card, but this day it was the sexual nature of the card that appeared.

A few days before my birthday, I drew Bouquet + Crossroads + Rider. That day I received a birthday gift in the mail from a friend. Gift (Bouquet) by road (Crossroads) delivery (Rider), aka the mail-lady.

LWB
The 91-page LWB is the same size as the cards and fits in the box with them. Lynn Araujo did a lovely job with the booklet. There is an introduction to the deck, describing how US Games asked the artist to do a Lenormand deck after falling in love with the tarot deck she did for them.

I was joyfully surprised, upon reading the introduction, that I was quoted in the booklet! (The quote was taken from a review on my former blog, Tarot Dame, regarding the Dreaming Way Tarot.) So that was fun, unexpectedly discovering myself in the LWB!

The majority of the LWB is devoted to the card meanings. Each description includes a quote relevant to the card's meaning, a full description of the card, and several keywords.

I love the quote feature. For example, the quote for the Snake card is a German proverb:  "Look before you leap, for snakes among sweet flowers do creep.". The quote for the Birds card is an African proverb: "Birds sing not because they have answers but because they have songs." The quotes really give an extra dimension to the cards. A couple of the cards have two quotes, while the Man and Lady cards have none.

The card descriptions are really thought out and well-written. It's actually an enjoyable LWB to read, not one of those general ones you just toss straight out of the box. There are some meanings for the cards that don't match with the way I learned the system. So if you already know the Lenormand system, you might find some discrepancies to your learned meanings. Just stick to what works for you, and take what enhances and compliments your method, leaving what doesn't.

The booklet ends with brief advice on learning to read paired cards. There is a variation on the Line of Five layout, as well as a "Spiral Spread".

Final Thoughts
This really is a lovely deck. I'm a huge fan of whimsy, and this one is done beautifully. Obviously, if you're going to pair a Lenormand and Tarot reading together, this deck would work beautifully with its sister tarot deck sharing the same name.