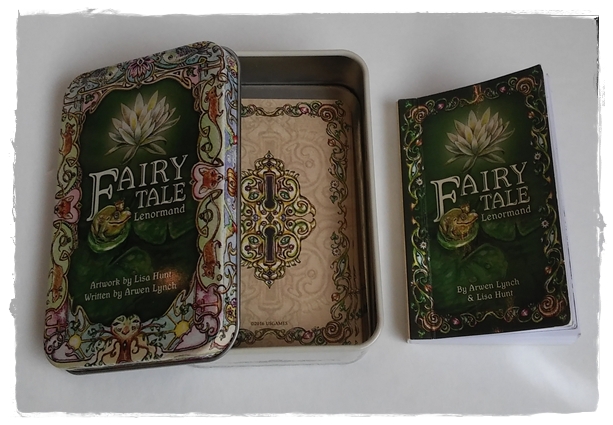 Fairy Tale Lenormand is a new Lenormand deck by artist Lisa Hunt and writer Arwen Lynch. It is one of the US Games decks that comes in a tin, which I shall always deem genius.

The Cards
The cards measure 2 1/4" x 3 1/2". There is a very light gloss to them. The cards feature numbers, titles and playing card associations. The card number is shown in a circle in the upper left corner, while the title and playing card association are along the bottom of the card. The backs feature an intricate design of mirrored keyholes. The design is reversible, except the US Games copyright print is written very small along the bottom of the backs, making it not 100% reversible.

The cardstock was initially stiff, but after literally two shuffles, it fluffed right up, like magic. It now shuffles flexibly.

The cards are smaller than the tin, so they don't fit perfectly like other tarot-in-a-tin decks. There is room for them to jostle around, both height and width-wise. The LWB is approximately the same dimensions as the cards, so it also is smaller than the tin. 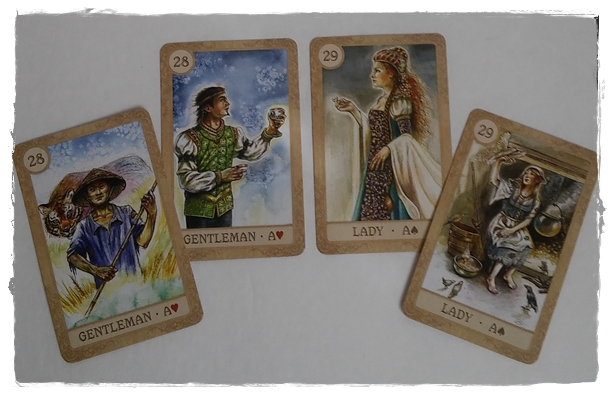 There are two of each Man and Lady cards, presumably for same-sex readings, although the reason given in the LWB is this: "There are two versions of the Gentleman. This is because many fairy tales often have the peasant becoming a prince or vice-versa. ... There are two versions of the Lady. You can choose the princess or the peasant, as you like."  When not in need of the second gender card, you can choose which players you want. I personally prefer the artwork in the Peasant cards, so those are the ones I use in my readings. 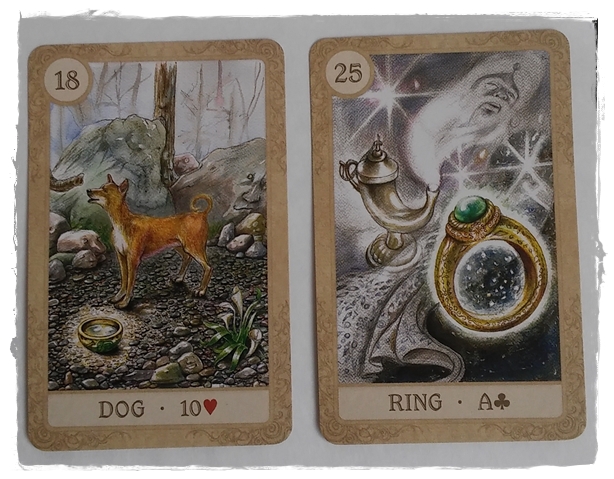 With my first look through the cards, I was so confused by the Dog card, because I wondered why it had a ring in it. It seemed like a combination of the Dog and Ring card... yet there was much emphasis on the ring, with the glow around it. My attention is immediately drawn there before even the dog. It wasn't until I read the story that goes with the card that I learned that it wasn't a ring at all. It's a bowl!  Yet... yet!!! It looks just like the ring in the Ring card! This choice is perplexing to me, and I still struggle to see the bowl as a bowl.

I have quite a few favorite cards. I love the feel of the cottage in the woods as the House card. And I'm a huge fan of the Snow White take on the Coffin card. I love the Rider (which is usually sort of a boring card for me), the colors in the Whip card, and the atmospheric Moon card. I also really like the Red Riding Hood Letter card (although I don't recall a letter in the basket in any version of the story I've ever read).

Another favorite is the Selfish Giant Garden card. As an introvert, the Garden is my least favorite card to see come up in one of my readings (no, please, not a social gathering!), but this sweet take on the card makes it much more welcome. The Bouquet card brings to mind the singing flowers in the Disney adaptation of Alice in Wonderland. And it's fun that the Book card features a grimoire, spelled with two m's "Grimmoire" as a nod to the Grimm brothers.

The Scythe card probably the hardest one to distinguish at first sight. It is very busy and it takes a few seconds to realize it's the Scythe card. There is a lot going on in the background and foreground. 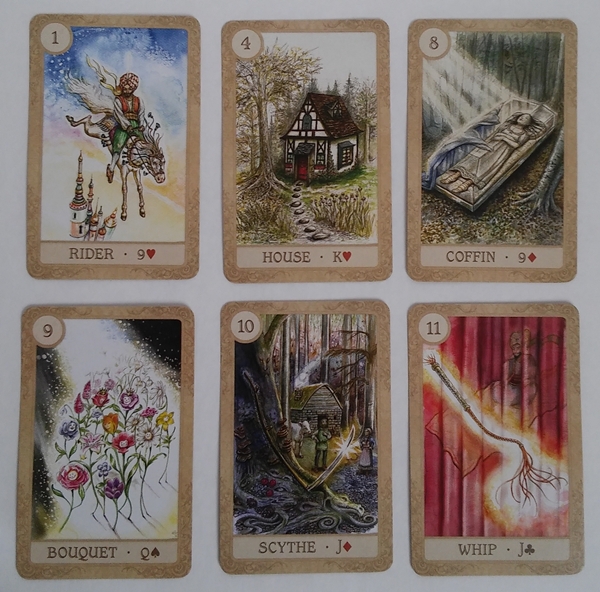 How it Reads
My first experience with this deck was pretty magical.  When I first opened the deck, I did a quick 3-card reading. I drew Bear + Lilies + Mountain. A few hours later, after putting the cards in different places in the deck, shuffling, then cutting, I pulled another 3 cards. The same 3 cards came up! Like magic! The only difference is that the Bear came up last instead of first. (It was Lilies + Mountain + Bear.) Incredible. After years and years of reading, when stuff like this happens, it still never fails to blow me away. The cards didn't even mean anything to me, and they didn't play out in real life, but the experience was still magical.

I find that this deck reads beautifully for a daily line of three or five.  I would not be able to lay out a Grand Tableau with this deck, however, due to the intricacies in the images making it too difficult for reading a huge tableau. It's hard to spot some of the cards at first glance, as they are surrounded by a lot of background details. When reading a Grand Tableau, I need very simple images so my eyes can immediately discern each card. Any extra flair distracts me. In this, I disagree with the forward written by Donnaleigh de LaRose, who claims the opposite... that the cards are easy to distinguish at a glance in a full 36-card spread.

For the most part, the readings I did were easy to read and accurate. Here are some examples:

One day I pulled Garden + Stars + House and later that day received two sets of visitors at home. (Garden = a group of people, Stars = multiple... so multiple groups of people.)

Another day, I pulled Clouds + Garden + Ship. That day was literally grey and cloudy (Clouds), and I got together with a friend (Garden) to say goodbye, as he was leaving to another state for 8 months (Ship).

One day I pulled Cross + Child + Rider. That day, my son's back was hurting (Cross + Child). I suggested he do some Pilates/exercise to stretch it out (Rider).

I did a reading asking if a package would be delivered on a certain day, and I pulled Crossroads + Anchor + Ship, so I took that as a yes. (Crossroads is the traveling on the road, Anchor is the full stop (delivery) and Ship confirms it was coming from overseas.) It did indeed arrive on the day I asked about!

Some days the cards didn't refer to anything happening in my day, so they were nonsensical, but maybe that was just because nothing of note happened on those days. 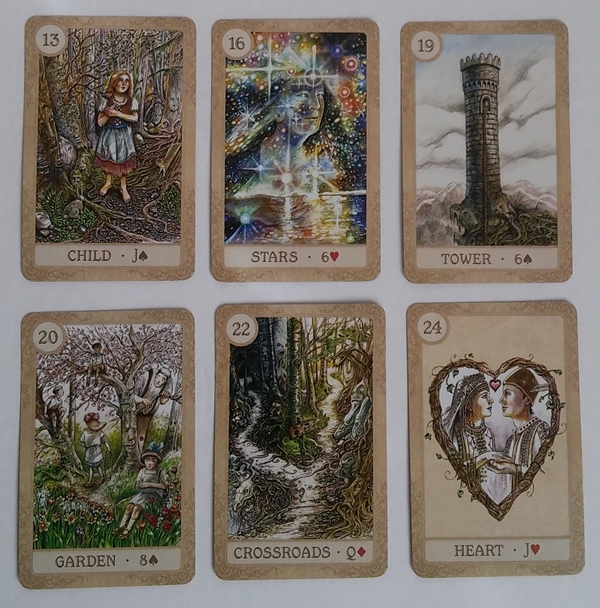 LWB
The book that comes with the deck is 120 pages. My booklet was printed with repeating pages. I have duplicates of pages 105-108. Each card comes with a few keywords and a very brief reference to a fairy tale, supposedly corresponding with the card image. For me, the LWB lacked continuity.

There are many cards that don't have a specific fairy tale matching the card. It's more of a general fairy tale theme, like the House and Fox representing houses and foxes in fairy tales in general. This suited me just fine. Then there are cards that feature a fairy tale which convey the appropriate meaning of the card, but the fairy tale doesn't feature the symbol of the card (such as there being no clouds in the Cloud story, no moon in the Moon story, no cross in the Cross story, etc.)

There are some good stories that make sense, like the message of the Little Mermaid in the Anchor card, Rapunzel in the Tower and Snow White in the Coffin. Some stories are a stretch, like the Fish card (no talk of fish or money in the story), and some leave you with only part of the story, like the Whip, where you never find out what the meaning of the whip was (because presumably it didn't fit with the meaning.)

There are some keywords and meanings given for certain cards that I don't vibe with, as it was not how I learned the cards. For example, I don't see the Rider as meaning "victory/success/dreams realized", as described in this LWB, as the Rider has always been a neutral card of "a message" to me, not automatically seen as successful. For another example, the LWB describes the Letter card as one of "setback/blockage/stagnation", and again, the Letter is another neutral "news" card to me, and definitely not automatically a negative. The Stars card talks of fame, while for me, the Moon card holds that meaning.

There are some spreads in the back of the book, but they are all variations of the same spread, a 4-Card Fan Spread. There is the Fan Spread, Crossroads Spread Tower Spread, and "Happily Ever Afters". Yet every single spread has you lay out the same exact fan, but with different meanings, and a different amount of 4-card fans. I found this odd and limiting. 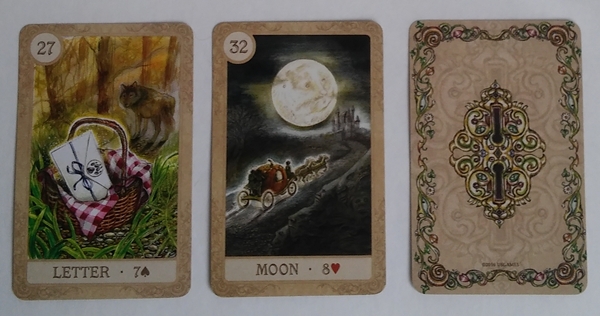 Final Thoughts
If you enjoy the fairy tale element and are drawn to the artist's style, this would make a fun, family-friendly addition to your Lenormand arsenal.