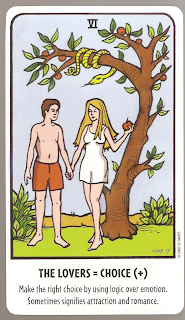 Tell Me Tarot is a deck geared toward newcomers to tarot, with a keyword and general meanings printed on each card. The brightly colored cartoon-ish style would appeal to a young audience (or those young at heart!). The lack of nudity or frightening images also makes it a welcoming starter deck for younger people.

The people in the Lovers (shown at left), World and Star cards are clothed in this deck. That being said, there is one card that jumped out at me, and I couldn't go without pointing it out. The Ace of Wands (below) is quite obviously phallic, to the point where it's impossible (for me personally), to imagine it being anything else. Even my eight year old son recognized it on sight. Now, I have sometimes seen the Ace of Wands as referencing just that, but it's certainly not always the meaning!

A unique feature of this deck is that each card includes either a positive (+) or negative (-) sign, or neither, for neutral or varying cards. I can see the benefit of looking at a spread and being able to quickly distinguish the balance of positive vs. negative. But I also think that this limits the cards' possibilities. But again, for a novice, this would probably prove helpful at first.

The general meanings and keywords on the cards are designed to help introduce the very basics. I was surprised at how well the cards were summed up. Some examples follow. 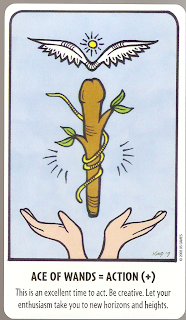 The Hanged Man = Surrender: Let go of struggles to gain peace of mind. What is meant to be yours will be so, effortlessly.

Death = Termination & Renewal: Let go of past patterns, people or activities in order to allow renewal and personal growth.

The Tower = Positive Changes (+): Unexpected breakup or destruction is required to release you from old chains and promote your growth.

Four of Cups = Open Up (-) : You are emotionally closed and ignore all the love that surrounds you and is offered to you. Open up.

Eight of Cups = Moving On (-): You leave because you feel something is missing. Allow yourself to follow your new desires.

Four of Swords = Freeze (-): Stay still and take time to think and relax. You can choose to resume activity at any time.

Knight of Swords = Rushing: You are confident and courageous but move too fast. Slow down. Enjoy getting there as much as being there.

Ten of Pentacles = Success (+): Happiness, wealth and joy are inherent and long lasting. Good family life. Success in reference to your question. 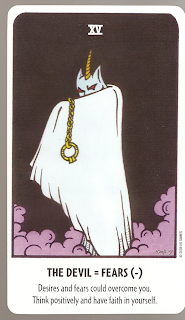 I like the simplicity of the artwork in some of the cards, such as the Hermit, Death and Devil. I also really like what was done with the Five of Wands. The card (shown below) depicts competition at a table... some sort of game or gambling going on there. I like how they are competing with one another, but aren't fighting each other. This is how I view the Five of Wands, and it's nice to have a card that portrays it as such.

The deck does not come with a LWB, as the meanings printed on the cards make a LWB unnecessary. There are four extra cards in the deck. Two of the cards display simple 4-card layouts (a General Spread, a Time Spread [past/present/future] and a Relationship Spread) . The other two cards provide an introduction to tarot with tips on how to word your questions.

Overall, I would definitely recommend this deck to someone just getting their feet wet with tarot. (And if the meanings prove to be distracting after they are no longer needed, they can always be trimmed off, so the cards need not always remain a "beginner" deck.) 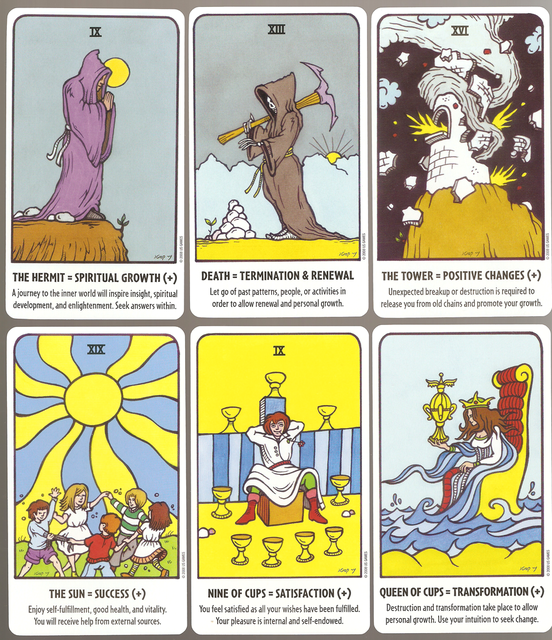 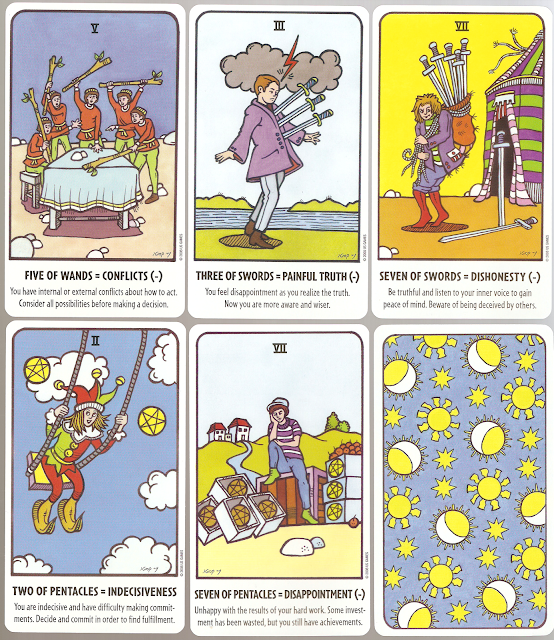 This deck review was originally published on my previous blog (Tarot Dame) on 1/9/09.