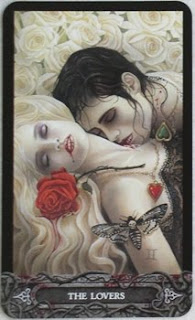 The Tarot of Vampyres, along with its accompanying book, Phantasmagoria, are the brilliant creations of artist and writer Ian Daniels. This definitely isn't "just another Vampire deck". When I first received the set, I was more than impressed with how Daniels was able to capture the darkness, the power, the seduction and the loneliness of the vampire world without the abundance of gore. But this wasn't the only thing that set this publication apart. The book is phenomenal. I was quite taken aback by the depth and intelligence contained within its pages. I was happily surprised with the magnificence of the set as a whole.

The Cards
The cards measure 2 3/4" x 4 5/8" and feature backs which aren't quite reversible, but enough so that it's difficult enough to tell at a glance which side is up. The cards are bordered on three sides with black. The titles on the bottom are surrounded by vines. It looks as though the titles could almost be gravestone headings. I do like the black borders, even though some of it is already chipping off (showing white) after two weeks of usage. This doesn't bother me anywhere near as much as if the borders were white to begin with. The black borders were definitely a good call with this deck. The card stock is lovely, very easily and smoothly shuffled.

The Majors are unnumbered, which is quite refreshing. Those who have conflicting views on where Justice and Strength should fit in the deck will find this a happy compromise for all.

The suits are named Scepters, Grails, Knives and Skulls. The Courts are titled Lord, Queen, Prince and Daughter. The Lords follow Thoth tradition, as they are the ones on horseback.

I was surprised to find many variations on vampyres in the deck. There are quite a few hybrid creatures, mixing vampyre with serpent, wolf, angel, gorgon/siren, feline, demon. This definitely helps keep the cards from seeming monotonous, giving it that extra little something to keep you interested. 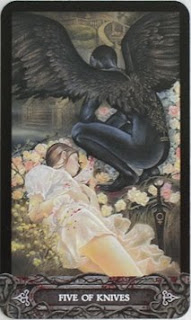 For me, the hardest part of writing a review is when a deck has so many  fantastic cards, that it's difficult to highlight only a select few, and struggling with which ones to display. So that I can end on a happy note, I will first discuss the cards I'm not a fan of.

I do have two least favorite cards. The first is the most jarring card in the deck for me. It's the only one I find to be violently gory. The Hanged Man  (below) shows a demon vampire hanging upside down on a cross while blood pours out of his mouth, creating a bloody fountain depositing into a natural basin at the foot of the cross. I get an evil vibe from it that makes me uncomfortable... but maybe that's the whole point.

The other card I'm not fond of is the Nine of Grails  (below). There's something extremely unappealing about the woman's face. She reminds me of someone who repels me, but I can't put my finger on who. It also has a bit of a dirty-porn feel to it. Definitely doesn't give me the "Nine of Grails" feel when I look at it.

Two cards out of seventy-eight isn't bad. And I can even imagine myself eventually acquiring an appreciation for the Hanged Man, so it's really just the one.

Favorites. That's much harder. This deck is so beautiful. I even appreciate the bits of blood trickling out of the corners of so many of the vampyres' mouths, because it's tastefully done (so to speak!).

The Lovers  card (above) is amazing. Romantic and haunting, it gives off that feeling of "nothing else exists but this moment". The Five of Knives  (above) captures my attention, and holds it there for a long while, each time I look at this card. It feels both dangerous and peaceful at the same time which is a fascinating paradox. The Four of Knives  is another card that grabs my eyes and keeps them there as I yearn to know more about what is going on in the scene. It shows a seemingly innocent fair young woman with blood on her white dress touching hands with a cemetery angel beside a dead, stabbed, bloody black bird. The Three of Knives  (below) is one of the many cards in the deck that (thankfully) strays from RWS tradition. It is yet another which begs us to interpret what has just happened with this girl as she sits in the snow covered graveyard, barely clothed (considering the weather) with a bloody knife, a rose and black bird. 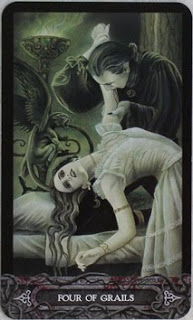 The Four of Grails  (left) is, interestingly enough, the only card which shows the predator/prey scene in the present moment of The Bite. And it's done so beautifully.

I love the Ace of Skulls  (below), which has a Day of the Dead vibe to it. I adore the contrast of the purple roses against the lifeless hues of the thorny vines. The High Priestess  (below) is beyond gorgeous and mesmerizing with her floating book before her. The Eight of Scepters  (below) made me laugh at first because it's such an angry, passionate, aggressive take on this card, though it's a nice stray from the usual (boring) eight sticks flying in the air. It definitely captures the rapidity of "something happening, and happening NOW!"

I like the variety of personalities on the Daughter and Queen cards. For example, there is a stark contrast between the Daughter of Knives  and Daughter of Skulls  (below). The former exudes the vibe of a rebellious teenage girl while the latter is more down to earth and has a calmer attitude (somehow oddly reminding me simultaneously of Ellen Page, Christina Ricci and Kristen Stewart). The Daughter of Scepters (and Queen alike) is sultry and seductive, while the Daughter of Grails appears more emotional.

How it Reads
The cards read very fluidly. The emotions of the vampyres are palpable and relatable. The expressions on their faces, or the setting of the scenes are very telling, yet at the same time mysterious enough to get you to delve further into the stories they attempt to tell you. The images draw you in and facilitate readings that are more emotional/intuitive than logical. If you allow yourself to enter the scenes, they will  tell you a story to help you with your inquiry. 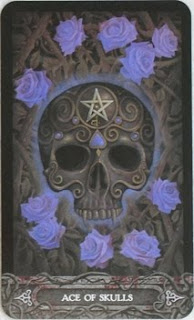 The Book
One of the things I love about tarot is that, as a reader, you will never cease learning. You can read the cards from youth to old age, and continue learning all the way. Phantasmagoria  is a wonderful reminder of this truth.

There are many deck/book sets where you think, after browsing the book, "I definitely could've done without the book and saved myself a few bucks." Phantasmagoria  is not one of those books. It's more than worth the price. The book can stand alone, and really deserves a review all its own. I won't go into too much detail, therefore not doing the book justice, merely to save this review from being way too long.

The 301-page book is written with a quantum view of the world, and thus, the cards. It explains such things as how the blood in the cards symbolize life force energy, how shadows aren't always negative, and throughout the pages, the author strongly affirms personal power and the ability we have to create the lives of our choosing. The interpretations are so well thought out and described in a way that I've never read before in a tarot book. It's a great read for any tarot reader, whether novice or seasoned.

The book begins with an Intro & Background, starting with the background for the inspiration behind Phantasmagoria.  The subsections following are Fear and the Shadow, The Hunger, The Blood Rose, The Nature of Matter & Time, and The Tarot of Vampyres.

The second section "Alchemy - About the Cards" provides your basic information about the cards and includes a couple charts linking certain cards with their elemental/planetary/zodiacal correspondence. There's also a section on Kabala and the Sephiroth.

The third section, "The Awakening" includes nine spreads and 5 exercises.

The fourth section, "Kith & Kin" includes information on creating your own personal Vampyre name, as well as a chart to help you configure your personal cards, based on your birth. These include your Dynasty card (Major Arcana), Vampyre Clan (which of the four suits you belong to), a Bloodline card (a Minor Arcana card), and your Vampyre Court Card. Once you know these, you can discover your Ancestry and Descendency cards. 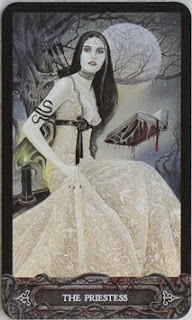 The card interpretations are divided into sections. First is the brief Alchemy and Kindred Spirits associations for the card. Then the Essence (which is a list of keywords and phrases). The Message provides an in-depth interpretation on the meaning of each card, which is followed by the Analysis & Symbolism, which details the card imagery and symbolism. Lastly, the Shadow interpretation is given.

I'd say, on average, the length of each interpretation is about 3 pages long, with the Major Arcana often being even longer. The detailing is immaculate, and the author takes such a deep, thoughtful, quantum look at each card.

Final Thoughts
Judging the kit as a team, it's got to be the best value I've probably ever seen for a deck/book set. Ian Daniels' artwork and writing are both stunning and captivating. The deck and the book could each stand alone on their own merits. Together as a set, they are an combination worthy of awe. 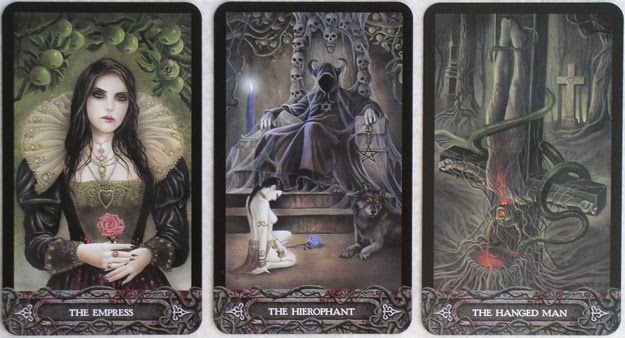 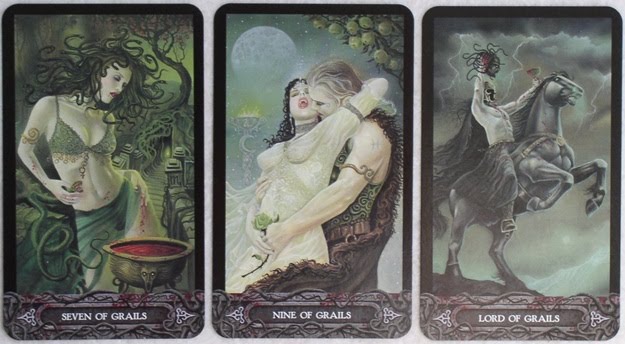 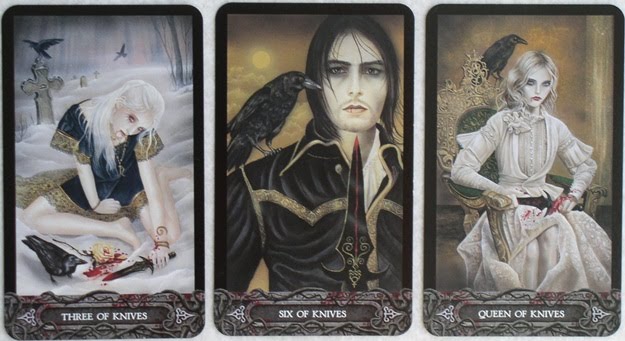 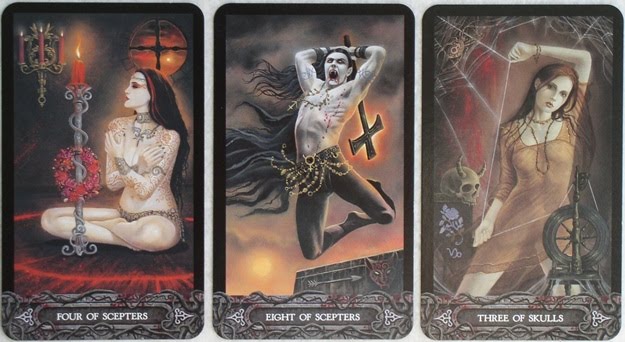 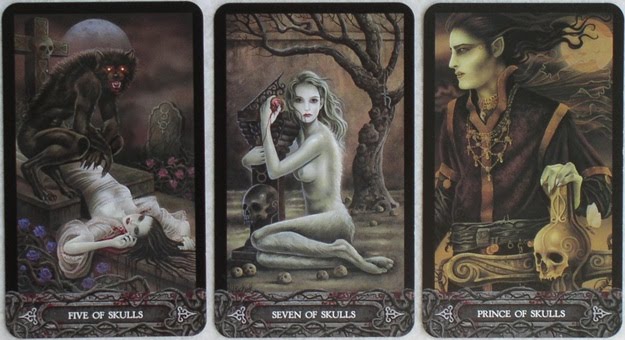 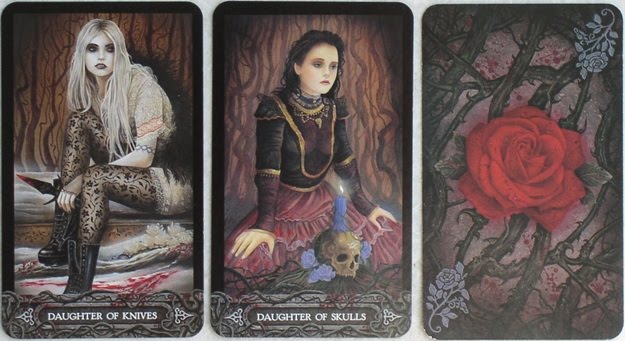 Deck: The Tarot of Vampyres (by Ian Daniels, published by Llewellyn).

This deck review was originally published on my previous blog (Tarot Dame) on 8/25/10.