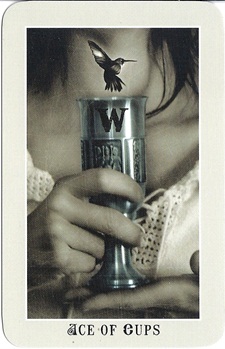 The Silver Era Tarot is a black and white photographic deck, featuring a single color accent somewhere in each card.  This splash of color against the black and white images makes this deck truly unique. The color accents vary from as obvious as the color of an entire dress to as tiny and subtle as the Hierophant's red lipstick. (Yep, you read that right!) The photographs beautifully blend the classic tarot poses and symbolism with a modern day vibe.

Setting this deck apart in yet another way is the fact that the artist and her husband (Aunia Kahn and Russell J. Moon) are the only two people featured in the deck!  The Three of Cups?  Three of Pentacles? All Aunia! While Russell is easily recognizable as each male character, Aunia takes on so many different looks throughout the deck that you'd never guess all the female characters were one and the same. She also portrays the Knights and most of the "usually male" roles in the deck (the few exceptions being in the Emperor, Lovers, Devil, Two of Cups, Six of Cups, Ten of Cups, Ten of Pentacles and the four Kings).

The Cards
The cards measure approximately 2 7/8" x 4 1/2".  The backs are reversible and every time I notice them, for some bizarre reason, they remind me of the close of a show I used to watch as a little girl, The Magic Garden. The pattern reminds me of the doors that slowly close on Carole and Paula singing us out. I loved that show, so the simply patterned backs, though probably nothing special to most people, always gives me a happy little nostalgic tug.

The borders are grey and blend in very well with the black and white images.  The card stock is thick and a bit stiff, so it's a tad harder to shuffle poker-style than most decks. But I'm hoping with time it will soften up a bit. 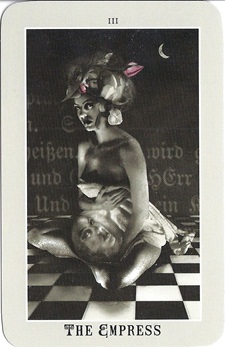 When I fall in love with a new deck, as I have with this one, it's always hard to single out a few favorites.  The Ace of Cups and Eight of Wands are probably the prettiest I've seen. I also enjoy that the hand holding the Ace of Swords is wearing a gauntlet. I love the touch of funky hair color and style in the Eight of Swords and the Star.

I find so many of the cards gorgeous, in different ways such as the stunning, surreal beauty of the Empress and the poise and beautiful look on the face of the woman in the Seven of Wands.

The Pages are delightful, as they appear to have stepped straight out of the original Rider-Waite deck, especially the Page of Pentacles!

While many of the cards follow the classic RW poses, there are some that offer a new scene.  The Fool, rather than showing a guy about to walk off a cliff, instead features a woman twirling around barefoot with a swirly skirt, capturing the essence of freedom and carefree bliss.  The Sun stands out with its simplistic symbolism. And Death has a dreamy quality to it, with a lovely young lady in a white dress who might be sleeping, if not for the macabre darkened eyeshadow covering the area around her closed eyelids.

While there's really not much I don't like about this deck, I will say that in contrast with the vast array of changing nuances of the female characters' poses and expressions, the male poses feel a bit static and could have used some more variation and oomph. He looks quite the same in most of the cards, with a stiff "hurry-up-and-take-the-picture-already" look.  Also, I find the High Priestess distracting, as my attention is always immediately diverted to her bottom hand dipping under her short dress, wondering if she's doing what it looks like she's doing...?!  But neither of these things are enough to sway me from my adoration of this deck. 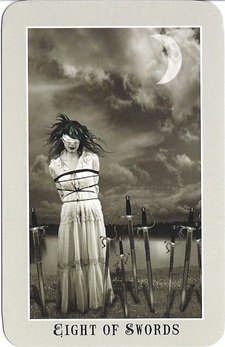 How it Reads
When reading with the Silver Era Tarot, the card images feel refreshingly clear, sleek and uncluttered. All the readings I have done with this deck have been easy to understand and right on point.  The classic tarot symbolism makes the images instantly recognizable, while the photographic artistry makes it relatable to the modern reader and querent.  I have found it to read like a charm!  The cards set such a gorgeous scene, that not only does it read well, but it serves as eye candy as well.

The Box and LWB
I have to hand it to Schiffer for making such perfect boxes to house their decks.  This deck and LWB comes in a sturdy pull-top box. There's a little flap of ribbon that you pull up and the box opens. When it's closed, it's held together magnetically, so you can hold the box upside down and it won't open. Every deck in the world should come in a box like this!

The LWB is made of great quality, with thick outer covers and glossy inside pages. There is a page dedicated to every card, and a small image of each card is included.  Each page begins with a brief sentence or two describing the card imagery. Following this is the Meaning, Reversed Meaning, and Keywords.  The two included spreads are your basic Past-Present-Future and Celtic Cross.

Final Thoughts
The Silver Era Tarot is so lovely to read with. The only thing I regret about this deck is not having gotten it sooner!  It delights me when someone takes tarot to an undiscovered place, and the creators of the Silver Era Tarot have certainly done just that, with magnificent results. It's definitely one of my new favorites.

(by Aunia Kahn and Russell J. Moon, published by Schiffer.)

This deck review was originally published on my previous blog (Tarot Dame) on 8/6/11.