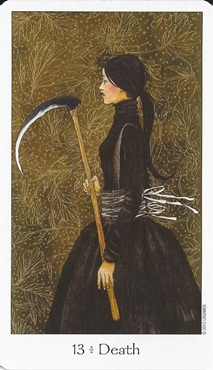 The Dreaming Way Tarot brings to mind illustrations from a vintage children's book. It has a dreamy, gentle quality about it. The images have a nostalgic feel to them and seem almost familiar.

The Cards
The cards measure 2/34" x 4 3/4" and have a nice matte finish to them. The backs are not reversible.

I really love the style of artwork in this deck, and the contemporary, whimsical clothing fashion that adorns the characters. Oddly, there aren't very many joyous feeling cards in the bunch... everyone seems to sport a pretty serious expression.

My favorite suit in this deck is the Cups. I love the black and white cups, and how they boldly contrast with the dreamy quality of the rest of the artwork. It's so different and unique, I think it's fantastic. The vibrant checkered patterns in some of the Wands cards has a similar effect.

The Aces are gorgeous in their simplicity.

The Death card is exquisite. A young woman in a black dress holds a scythe. It is simple and elegant. One of my favorite cards in the deck.

This deck has what is probably my favorite rendition of the Two of Wands. Usually this is a "meh" card for me, but this one is very interesting. The figure is looking out at two worlds, the one he is on, and another one up above, upside down. The one upside down doesn't appear to be as inhabited as this one, so it brings to mind the unlimited possibilities of those who dare to dream far and wide. This card came up twice for me this week. 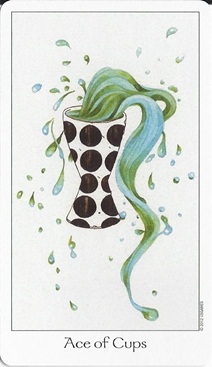 Whenever I come across the Eight of Cups, it's hard for me to look away. Something about her outfit mesmerizes me. I can see the wind blowing and making her dress bubble up behind her. I love looking at this card. It makes me want to follow her, which is a great way to feel about this card. You're supposed to move on in her direction when this card comes up.

I like the motherly touches in the Queen of Cups, who has a child sitting next to her, and the Queen of Pentacles, who is holding a baby.

The Devil is very interesting, as it is portrayed by a cute young woman, shackled herself, but still in control of the chains that bind her subjects. She has horns and wings... it's a beautiful illustration. But it's certainly not a scary Devil card.

The Ten of Swords in this deck is another interesting one, for a couple reasons. Rather than the swords being in the guy's back, as we usually see in this card, they are in his chest and stomach. He wasn't stabbed in the back. He saw this coming. This card came up in a couple readings for clients this week. In one reading, it appeared next to the Ten of Wands. The figure in the Ten of Wands was hunched over, indicating back aches, and I mentioned that the Ten of Swords is usually shown with the swords in the back as well. My client said that she was having back and stomach problems. So it was quite literal, this card, indicating the stomach in this deck, when it would usually indicate the back. I loved the synchronicity of this particular card coming up in this manner.

Another thing about the Ten of Swords is that instead of red blood, there are blue marks. It gives the impression of bruising rather than bleeding. So this underlined for me the feeling that the Ten of Swords is sometimes melodramatic and implies that a situation looks worse than it actually is.

The Page of Cups has a teapot tied to her head, and I can only hope it's cold water in there.  There are fish swimming toward her, in mid air. It's a strange card, definitely something that would make total sense to you in a dream, but very strange in real life. 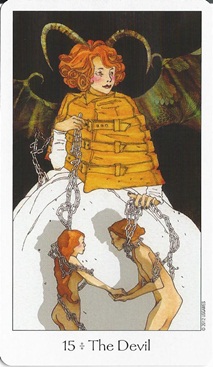 The World card is curious. There's a little old bearded man napping in a chair. On his lap is a book open to a page with illustrations of the corner animals you usually see in the World card. I guess this is a man who has achieved what he has set out to in his life, and he is now retired and content? I don't know, it's definitely one of the more unusual interpretations of the World card I've seen. But it's a pleasant looking and comfortable feeling card.

As with any deck, there are cards that I didn't love. The Lovers card rubs me the wrong way. It just doesn't feel very Lovers-y to me. The guy looks bored, the angel looks awkward and the woman looks uncomfortable.

The Three of Pentacles isn't my favorite. It doesn't fit at all with what I think of the Three of Pentacles. To me, this is a card of mastery and success. Excelling at what you're good at, and others acknowledging that. In this card, the girl seems very put out. She has a paper bag on top of her head, and coins are dropping out of it. She's not doing anything. It feels like she is losing money, and she has her arms crossed, just resigned to the fact. I cannot understand how this image fits with the Three of Pentacles. This card came up in a couple readings for clients this week. Both times I read it a bit differently, but both times I read it intuitively. I said what the card made me feel at the time.

The Five of Wands is a card that hasn't come up for me yet in a reading, but when I see it in the deck, I hurry past it. The main boy's expression is so weird to me. Something about his nose and mouth, almost like he's deliberately making a funny face, but he's not.

The Ten of Pentacles is bizarre too. There are four figures, clustered together, facing the same direction.  It's hard to make out where the two middle people separate, unless I look very closely. I'm left wondering what these four have to do with anything.

But overall, the imagery in the deck is quite charming. In fact, while I am typing up this reading, I have just noticed something that I didn't notice before in one of the cards. The Four of Cups is another card I really like in this deck, but I wasn't going to mention it until this thing caught my eye. I just noticed that there are three daisies in the card, but they look for all the world to be photographs, compared with the lines of the other drawings in the card. I am staring and staring at this card and I can't figure it out! It is most curious!  It almost looks like real life is poking through into a dream. Like that in-between state between dreaming and waking, when you hear something in the real world, but it plays out in your dream. This card even came up in a reading for a client this week, and I never even saw the daisies! (In the scan below, the daisies appear darker and more solid than they appear in the actual card, so it's hard to see what I mean unless you have the deck in front of you.) 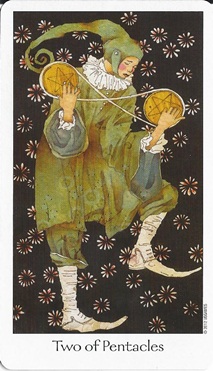 How it Reads
I have found this deck to read clearly and concisely. It works well to spark intuition, and can also be quite literal.

It would be a great deck for storytelling and readings where you allow your imagination to wander and take you to places where you can use metaphorical references. It is easy to see a story unfolding in the imagery of the cards, and they blend together seamlessly.

I did find it interesting, as much as I like this deck, that I only chose it to read for certain clients this week. I didn't select it for any of my male clients, as the cards feel heavily feminine to me.  And I also chose in favor of another deck when I read for a client who was feeling very downhearted. Looking through the deck, it does have a hint of melancholy to it, so I passed on this deck when I was looking for a decidedly more uplifting vibe.

But when I did read with it, I found it to be lovely and charming, whimsical and honest.

Final Thoughts
The artwork in this deck is beautiful and it lends itself well to intuitive readings. The matte finish is quite nice, so the cards themselves are pleasant to work with. It's one of the most interesting and attractive decks I've seen published in quite awhile. A definite keeper and one that will remain in my regular rotation of reading decks.

See also: My review on the artist's sister deck: The Dreaming Way Lenormand.

See below for 15 more card images. 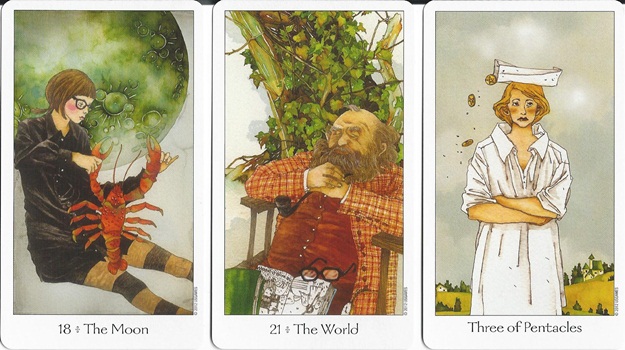 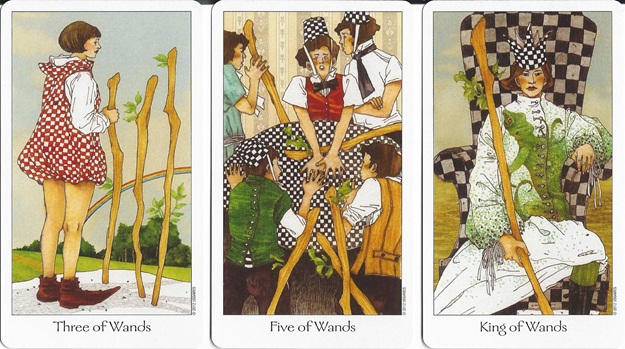 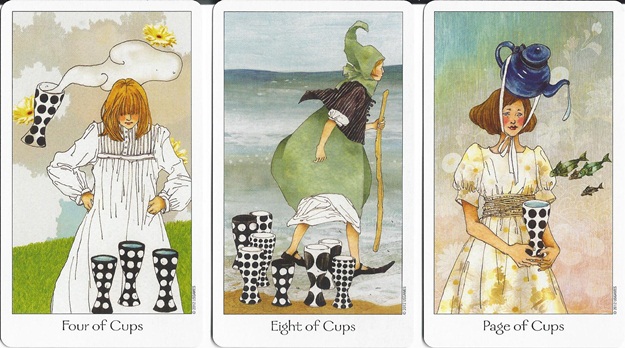 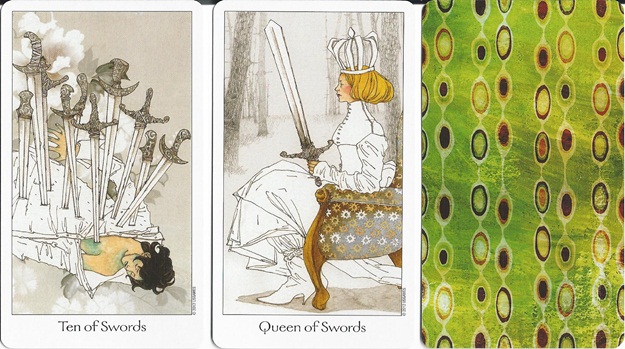 This deck review was originally published on my previous blog (Tarot Dame) on 1/25/13.