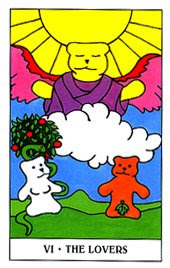 Ah, ya gotta love the Gummy Bear Tarot. I personally don't even eat gummy bears, but as tarot characters, they are simply irresistible! First of all, it's one of the decks US Games has packaged in a tin, which is such a brilliant idea. And like the other tarot-in-a-tin decks (Vanessa and Halloween*), the deck is pocket sized and printed on matte card stock. So right out of the gate, it's got three things going for it. And we haven't even gotten to the reading of the cards yet.

*US Games has since presented many more decks in tins since this review was first written.

The Gummy Bear Tarot follows the traditional RWS imagery so it is ready to read right out of the box. The vibrant colors and G-rated illustrations make it ideal for children or those less comfortable with the "scarier" images in traditional tarot. It's also a great deck for when you want truthful readings, but you want them presented in a more light-hearted manner. For example, I had a particularly difficult week, and I wanted to use a deck that would lift my spirits, while not necessarily sugar coating the readings. This was the perfect choice, and it did just that.

You would think that with such a silly premise, this feel-good deck wouldn't be able to provide serious readings. You would be mistaken. This deck speaks in a very easy manner, and is very straightforward in its messages. I can see it easily being used for every day reading. 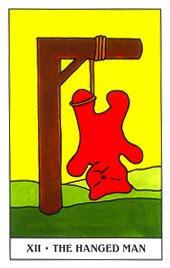 The LWB is great too. It is deck-specific and provides interesting insights into the cards. What I love about it is that they don't give the usual "upright" and "reversed" meanings. Instead, they provide "strengths" and "weaknesses" for each card, so if you don't read reversals you can still get a full, balanced sense of each card. Also, each strength and weakness is accompanied by a wise (and often humorous) saying and a task.


TEN OF WANDS
A bear carries ten wands through a lovely landscape to his home. He has difficulties holding onto the wands; they might fall at any moment.

STRENGTHS: Courage. Willingness to take on responsibility and risks. Not afraid of big tasks. Enjoys testing limits. Willingness to start over. Only by risking failure do we learn the secret of success.

WEAKNESSES: Pressuring yourself. High expectations. Unwilling to say no. Unable to see past problems. Overwhelmed. Not knowing where to start. No one is useless. You can always serve as a bad example to others. 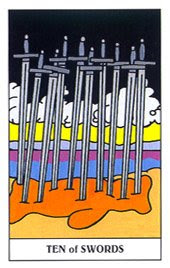 I love the simplicity of many of the cards, such as the Hanged Man. You get the idea behind the card with none of the excess frivolity. A hanged gummy bear with a none-too-pleased expression on his face. Nothing more, nothing less.

The Ten of Swords, which is sometimes a bloody card in other decks, is depicted here in a true manner so that you understand what is going on, but it's not overly graphic. Knowing the texture of a gummy bear, you know firsthand just how the swords feel, punctured in its mushy body. You get the effect without the gore.

I think the Gummy Bear Tarot is a great all-purpose deck. It has surprised me by sneaking into my list of favorite reading decks. It's kid-friendly, it's adult-friendly, what more could you want? 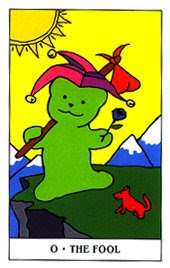 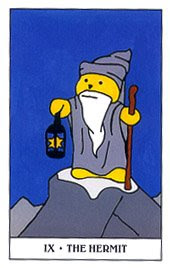 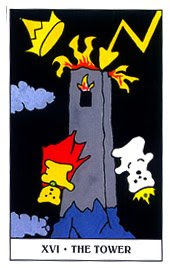 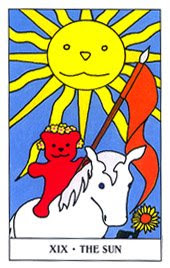 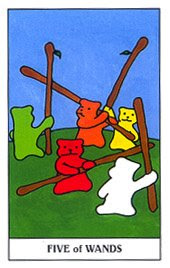 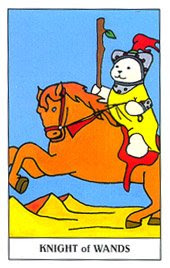 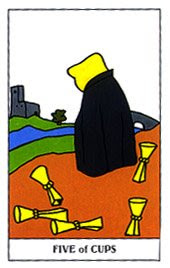 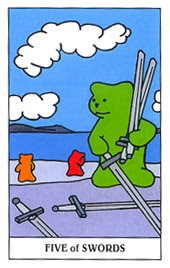 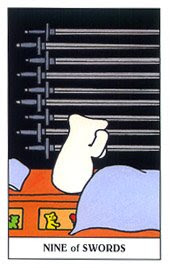 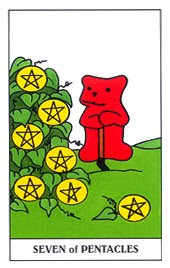 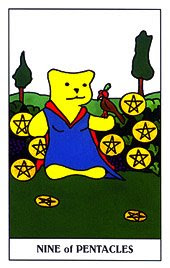 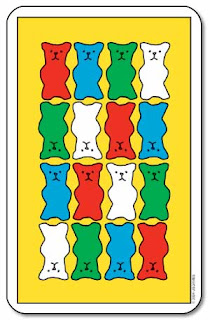 This deck review was originally published on my previous blog (Tarot Dame) on 7/4/09.