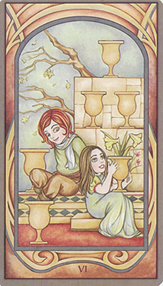 When I first saw images of the Fenestra Tarot online, I was very drawn to the whimsical lines and soft coloring. When I received my copy, my first impression was that it looked a bit flat and I wasn't sure that it would lend itself to deep readings. But after working with the deck for a week, I was very glad to be proven wrong.

The Fenestra Tarot was named for the Latin word for "window" and was designed with the intention to open the windows of the reader's imagination. The borders featured on the Minor cards give the feeling of looking through a window.

"Thai artist, Chatriya, has creatively fused traditional tarot symbolism with elements from her own culture and influences as far reaching as Egypt, mythology, Japanese manga and Art Deco." (Taken from the LWB.) 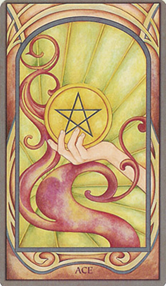 The Cards
The borders on the Minors are completely different from those on the Majors, though both are elaborate. Surprisingly, I didn't find this at all distracting. What did draw my attention was the bizarre inconsistency of the artwork in some of the Majors. There are quite a number of cards which feature illustrations with much softer lines, and when side by side with a Minor, they almost look like they come from two different decks. The Minors have more of a cartoon-y style with very distinct lines, while many of the Majors are are more softly blended in. So sometimes seeing one next to the other, the difference is enough to make me stop for a moment and wonder at why this was done, which is a bit distracting. However, it's a minor annoyance, and not enough of a problem to hinder a reading.

Though a completely recognizable variation of the RWS, the Fenestra does stray from tradition on many cards, which I like. When I drew the Hierophant, I was pleased and comforted by the route the artist took with the card. Usually topping my least favorite list, the Fenestra Hierophant has a gentle zen-like vibe going on, which provides a more peaceful, spiritual take on the card.

The Moon card (shown below) is another which deviates from tradition. It features two nude women, one above and one below the moon, surrounded by whimsical swirls, and it looks almost as though they are swimming around the moon. The Temperance card (below) offers an unusual version, with the angel dipping her toes into a blood-red pool of water. 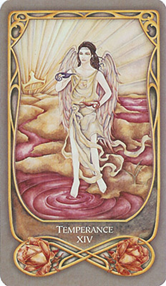 The Six of Cups (shown above) was the card which initially drew me to this deck. I love the way the children are drawn... it has a very storybook-style feel to it. I also love the whimsical Aces.

The Devil is sexy as hell (no pun intended), and is really the first Devil card to give me that strong feeling of doing something you know you shouldn't, but you just can't help yourself.

I'm very drawn to the style in which the Nine of Swords is illustrated, and I'm captivated by the feeling I get from the Three of Wands, as though I'm actually right there in the scene. (Cards shown below.)

My least favorite cards are probably Death and the Nine of Pentacles. The horse in the Death card is drawn in such a manner that it's difficult to tell where his head it, and it's a bit of a struggle to make out the image. The Nine of Pentacles just looks a little too modern. There's something about it I can't quite put my finger on, but it just doesn't seem to fit with the other cards. 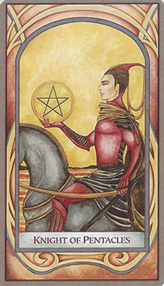 How it Reads
The Fenestra Tarot is surprisingly blunt. The gentle and soothing coloring is deceptive, as it originally led me to imagine that the deck would deliver very soft readings. But it delivers quite a smooth punch, and doesn't beat around the bush. It tells you what you need to hear without sugar coating the message, but it does so in a way that isn't unnecessarily brutal or abrasive, which makes for an interesting and inviting blend.

While using the deck for my daily draws every day for a week, I found it to be eerily precise in describing either what I was going through that day, or depicting with amazing accuracy an event that occurred the prior evening. The meanings are very clear to understand and easy to relate to. 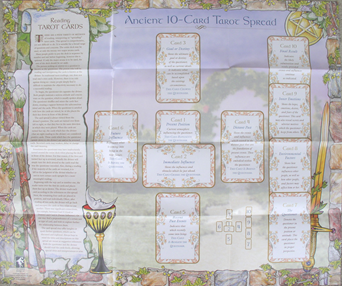 The LWB and Spread Sheet
The Little White Book which accompanies the Fenestra Tarot offers general meanings for the cards, and are not specific to this deck. The LWB includes the Celtic Cross spread. Three blank pages are provided for notes.

The Spread Sheet included with the Premier Edition (shown at left) displays an "Ancient 10-Card" spread, which is a version of the Celtic Cross which differs in position from the one featured in the LWB. Spread sheet measures approximately 20" x 17" and folds up for easy storage.

Final Thoughts
After going back and forth with this deck, once I actually used it, I was pleasantly surprised with how well it reads. It's a beautiful variation on the RWS, and as it seems to have a universal scope, I'd recommend it for any type of reading.

This deck review was originally published on my previous blog (Tarot Dame) on 6/30/08.