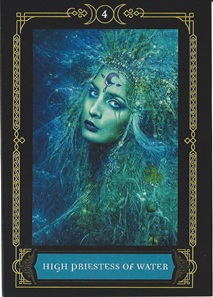 When I picked up a copy of the Wisdom of the House of Night oracle deck, I had no idea it was inspired by a book series.  I haven't read the books, nor do I intend to.  I think anything  can be used as an oracle, so it doesn't matter to me that the deck is linked to a series I know nothing about.  But this review will undoubtedly be different than that of someone who is familiar with the characters and story behind the cards.

The books are apparently vampire-themed, though you would never know it by the cards. There are no cards in the deck that would make me think of vampires.

I have enjoyed working with this deck much more than I thought I would. I bought it on a whim, not expecting much from it at all. There was a security sticker on the back of the box concealing half of the three cards featured on the back, so it was a leap of faith taken because I liked the cover. Unwrapping the deck, the back of the box still left much to be desired and I don't think the cards chosen for the back are a good representation of the deck as a whole.

The Cards
There are 50 cards that measure 3 7/16" x 4 7/8". They are glossy and flexible. They have silver gilded edges, which I love. The backs are reversible, though the deck isn't designed to be used with reversals. The corners of the cards aren't rounded. They are sharp and squared, which feels uncomfortable to me. If I were to read with this deck regularly, I would probably round the corners myself. But the cards shuffle beautifully.

The cards predominately feature either young women or symbols (non-human objects). Men are featured in only 4 of the 50 cards.

The deck reminds me a bit of a darker version of the Enchanted Map Oracle (I thought this before I realized Colette Baron-Reid had her hand in both decks, but now it makes even more sense.) I think it would be great to pair these two decks together for readings. 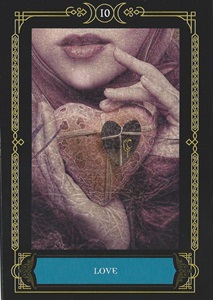 There are 8 cards which relate to characters in the book series, but you don't need to be familiar with their personalities to read the cards, as the themes are self-explanatory. The name on the card is followed by the character's name in parentheses as follows:

The Belonging card also features a "character" in parentheses: (House of Night).

There are five High Priestess cards, all of which turned up for me during my first week with the deck. Each of the elements are represented: The High Priestesses of Air, Water, Earth, Fire, and Spirit. The High Priestess of Spirit card features ghostly images of the other four priestesses above her head, which I thought was really lovely.

One of my favorite cards is the Fragment card.  It's a haunting image of a female ghostly spirit floating amidst a dark woodsy meadow. It has a really strong spirit feeling to me.

Another favorite is the Invisible card where we see a girl crouching down looking into a round mirror on the ground. It's a foggy, cloudy, stormy background. We can't see the girl's face, but her body is painted (or tattooed) and she's wearing modern black and white striped leggings which really stand out compared with the antique feel of the rest of the card.  I find myself wondering what she is scrying in that mirror. It's a really beautiful card.

There are several animals in the deck: Cats, birds, horses and butterflies. There are also many very attractive cards that don't feature humans. These show images like a wine glass with a pomegranate, a lit candle, a stone (gravestone?) with the words "Don't Forget" engraved in it, a rose, a doorway, a tornado, a parchment  scroll of Congratulations, and many more. I really like these cards. They serve as a nice balance with the people cards. 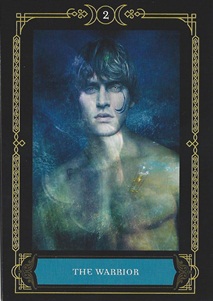 How it Reads
The deck doesn't give fluffy readings. The imagery and themes are serious, deep and insightful. The readings I have done have connected to each other, repeating cards and themes. I love when a new deck does this, as it allows me to feel more connected and get better acquainted with the cards. My readings with this deck have shown me cards that have been relevant to my life situations. They have been very helpful in digging deeper into the experiences I have been going through.

The cards will tell you what you need to hear, whether it's what you want to hear or not. If they are addressing a difficult time, they will deliver the message honestly but gently enough not to cause you more distress.

I've found that the readings I get with this deck are very helpful in guiding me where I need to go next. They've proven very helpful and practical to me.

The Book
The book is 127 pages, featuring black and white images of each card. The sample readings include questions that seem to be geared toward teenagers (which I assume is the same audience the books are meant for). But the majority of the book doesn't feel age-specific. The card meanings are applicable to anyone of any age.

There is a short story in the beginning of the book, explaining that the deck is a gift of wisdom from the goddess Nyx to the vampyre queen, Sgiach, to share with the modern world.  The card meanings are written from the voice of the goddess Nyx.

There are 3 spreads in the deck. A 1-card spread, a 2-card Relationship spread, and a 3-card Past-Present-Future spread.)

Final Thoughts
I have to say I am really  glad I didn't know that this deck was designed to accompany a vampire book series geared toward teenagers. If I had known that, I probably never would have bought it, and I would have missed out on a really nice deck. The cards are beautiful, atmospheric and intuitive. They read really well, so they are much more than a bunch of pretty pictures. This will definitely remain one of my reading decks.

Deck: Wisdom of the House of Night Oracle Cards  (by P.C. Cast and Colette Baron-Reid, published by Potter Style).

This deck review was originally published on my previous blog (Tarot Dame) on 11/19/12.