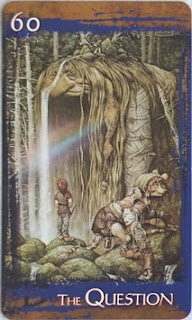 I am a huge fan of Brian Froud's The Faeries' Oracle. When I heard he was creating a second oracle deck titled The Heart of Faerie Oracle, I had mixed emotions. I was excited. I couldn't wait to see a whole new set of cards with Froud's magical faerie touch. But I wondered, due to the name of the deck, if it would be a deck designed to work only with relationship issues. I hoped it wouldn't be that limiting, and I hoped the deck would be as enchanting as his first. I am thrilled to say that I was not disappointed on either count.

The cards are every bit as magical and enchanting as the first deck. They have a different quality to them which is hard to describe. They feel more earthy than their cousins of the first deck.

The Cards
The set is comprised of a hardcover book and 68-card deck. The cards are the same size as The Faeries' Oracle (3" x 5"), which makes it easy to blend the decks if you want to have a Super Sized Froud Faerie Deck. For now, I've kept the decks separate, but housed in the same bag together.

My deck arrived with several damaged cards, due to unstable packaging. The cards are not shrink wrapped, and they came loose in the box. I returned the damaged cards to the publisher who graciously and promptly sent replacements. 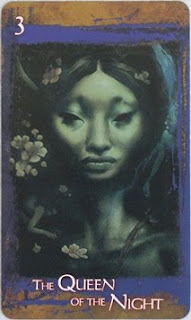 The beautiful backs of the cards (featuring winged hearts, see image below) are reversible, though the book mentions that they are not intended to be read reversed. I don't read with reversals anyway, but of course whether you do or not is entirely up to you.

The borders in this deck are awesome, and if you know me, you know I'm not shy about hacking the borders off my cards. So when I find a border that I like, I'm giddy. I love that the borders vary slightly from card to card, though the colors and style of ragged markings are the same throughout the deck. They blend in well enough that you might not even notice they are different, but they are different enough so that they don't look like cookie cutter borders.

The deck is divided into seven categories: 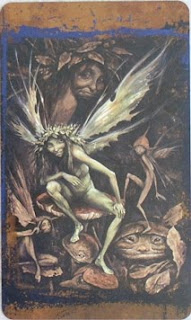 After thumbing quickly through the deck for the first time, I was surprised and delighted to find that there were three cards which were unnamed, untitled, and absolutely unmentioned in the book. I know that this will be a source of anxiety to some people, but for me these three mysterious cards are a magical and enchanting inclusion. It almost makes me wish that all the cards were done this way, and that there was no accompanying book. I love pulling these cards in a reading because they are completely free to tell me what I need to know, unencumbered by a predefined "meaning". (See left for an example of one of the untitled cards.)

One of the first things I noticed when skimming through the deck was that there are cards named Tink and The Pan, which of course made me think of Tinkerbell and Peter Pan, though they are not mentioned in the book. The book does mention Peter Pan when discussing the card titled The Boy, which features a young lad with red hair wearing a pirate hat and coat, who reminds me of a cross between Peter Pan and Pippi Longstocking.

I love so many of the cards in this deck, but my absolute favorite is the gorgeous and intriguing card titled The Question (shown above). It reminds me of the magical quality of movies like The Dark Crystal and Labyrinth (both movies were Froud collaborations). There is another card, my second favorite, titled The Leaving, which features the same two characters as the ones in The Question, which I thought was really neat. The Question was the card that made me have to have this deck. I'd love to have a print of this card to hang on my wall.

For the tarot lovers, there's a shout out to tarot in this deck with The Magician, who stands amongst a flurry of wind-blown Marseilles tarot cards swirling thorough the air. 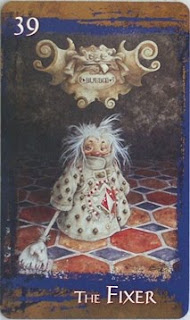 How it Reads
These faeries are every bit as chatty and brilliant as the first deck. There was the time I asked if my son should open a birthday gift early, and The Gift card came up in answer. Then I pulled The Green Man on St. Patrick's Day.

One night I asked what I should spent the evening doing, and I drew The Queen of the Night (creative inspiration), The Boy (indicating my son), The Gift (a gift for my son's birthday which was in a couple days) and Bright Spark (flash of inspiration / bright idea). I remembered immediately that I had wanted to write a special letter to my son to put inside his card (but had forgotten!). However, when these cards came up, Bright Spark gave me a new idea, and I ended up doing something more artistic, yet still meaningful, which he ended up loving. With an open evening ahead of me, and still time before his birthday, the faeries made it perfectly clear what I should do that evening.

Though the faeries can be silly and lighthearted, they can also be serious, and it has been my experience that they expect their advice to be followed. What's wonderful about them is that they are as serious about their fun as they are about their warnings. I know better than to turn to the faeries unless I am prepared to listen respectfully to their messages. And in return, they never fail to tell me the truth of what I need to know (whether or not it's what I want to hear).

The Book
The beautiful 137-page hardcover book is written by Wendy Froud, and includes commentary on each card. I personally preferred the book which accompanied the Faeries' Oracle (which was written by Jessica Macbeth.) The book for the Heart of Faerie is less involved in its interpretations of the cards, and almost clinical in comparison with the first book. Many of the explanations on the cards feel lacking and unfinished. I suppose this can be seen from a negative or positive point of view. On the bright side, it leaves the cards more open to personal interpretation. 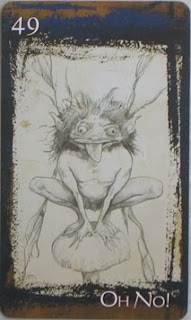 There are two very interesting spreads included in the book, The End is the Beginning (7 cards) which takes you along a journey, with an option of a shortcut (which may or may not be in your best interest). And the Three Wishes Reading (3 cards) which has you working with the faeries to make three different types of wishes.

Also included in the book is an enjoyable interview with Brian and Wendy Froud, about the success ofThe Faeries' Oracle, and the inspiration behind the creation of the Heart of Faerie Oracle.

Final thoughts
I love this deck wholeheartedly. From the richly colored images to the black and white sketches, the serious to the silly, this deck has it all. If there was anything I could change about it, it would be the fact that there are a lot of human-esque beings in the cards, and I wish there had been a greater ratio of creature characters, as I enjoy them more. That being said, this deck is one which immediately became a favorite reading deck.

While I have mentioned Froud's first deck, The Faeries' Oracle, several times in this review as a natural comparison, it is not necessary to own one before the other. The Heart of Faerie is not the sequel to the first deck. While they can be used together, they each stand alone perfectly well. (Though I do absolutely recommend them both.)

If you are into faeries, or love Brian Froud's artwork, or loved the first deck and are curious about this new one, I have nothing but encouragement for you. The cards are gorgeous and engaging, and the faeries are brilliant. 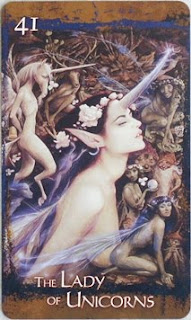 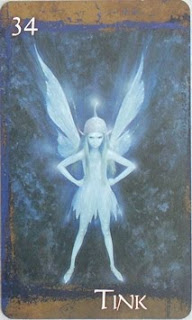 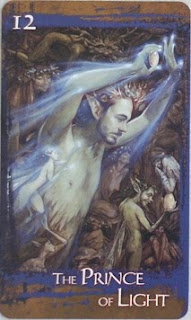 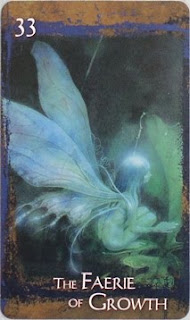 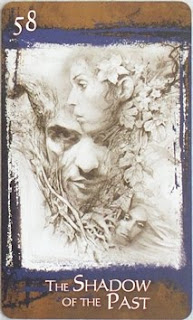 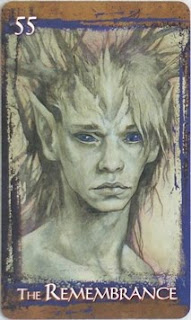 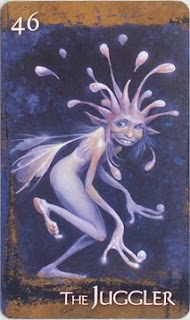 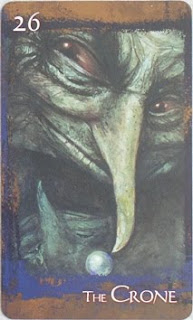 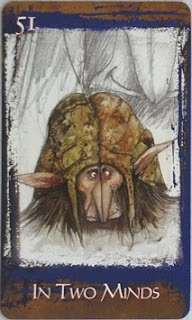 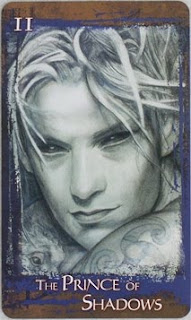 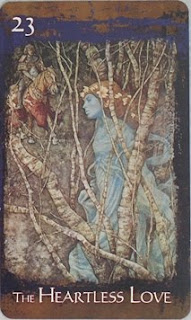 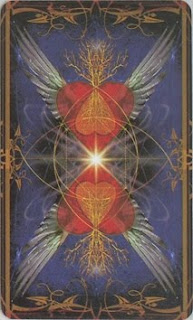 Deck: The Heart of Faerie Oracle (by Brian and Wendy Froud, published by Abrams Books.

This deck review was originally published on my previous blog (Tarot Dame) on 5/1/10.