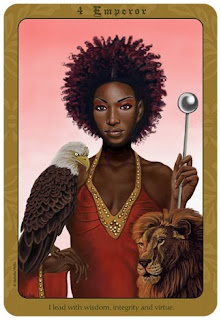 Affirmations for the Everyday Goddess is a 22-card (Majors only) tarot deck, self published by Pamela Wells. The deck and 110-page spiritual guidebook are designed for contemplation, prayer, affirmation, and bringing your inner goddess into your daily life.


The Cards
The cards and deck come in a sturdy box with a lift-off lid. The entire set is very professionally put together, and if I hadn't known it, I'd never guess that they were self-published. The cards have a glossy laminate and the borders feature metallic gold ink overlay that shimmers when the card moves in the light. The cards are pretty large (3.75" x 5.5"). The card titles are on the top border, with an affirmation along the bottom border. The backs (non-reversible) feature a jungle cat creeping through lush greenery. There is an extra card that comes with the deck titled "Wisdom Prayer Guide" which provides a brief prayer for each card. For example, the prayer for The Empress is "May I feel love for and connection with all beings." while the affirmation for the same card is, "I see the sacred in all beings and myself."

Being a goddess deck, the main figures in the cards are all female. The only males in the deck are in the Devil and Lovers cards. The Devil card shows a woman with Medusa-like snake tendrils emerging from a tree, while a nude man and woman stand at the bottom of the tree. The Lovers card is a female angel holding a sphere in her hands, and inside the sphere is a small image of a man and woman from the upper chest up. The Tower has a couple of people falling, and they are of ambiguous gender. The Sun is the card that stands out as being vastly different from the others, as it shows a face, eyes closed, within the sun's rays. I suppose, with the lipstick, this is supposed to be female as well, but it looks rather androgynous to me, and at first glance I always assume it is male.

There are two name changes in the deck, as the Hanged Man becomes the Hanged One and the Hierophant is renamed High Priest.

The card images are very striking and depict strong, confident women. One of the things I love about the deck is that the artist has illustrated women from a variety of races. This makes it easier to relate to, since it mirrors the world we live in better than a lot of decks out there. If you look closely at a couple of the cards, there does seem to be a bit of age variety as well, which is also nice. The cards are not designed for any specific religion, so I imagine women from many different spiritual paths can find comfort and wisdom in these cards, as they illustrate the divine within each of us in a non-denominational manner. 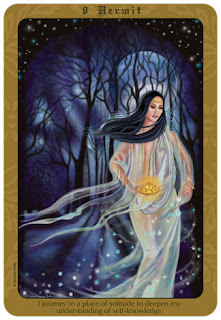 The coloring is lovely and varies from card to card. Some of the cards are vibrant and lush, while others are softer, but they all flow together seamlessly. Many of the cards are so gorgeous that I can sit and lose myself in them for some time. I don't personally use cards for meditation, but if I did, this deck would probably be one of my first choices. If I wanted to channel a strong, powerful woman, the Emperor exudes that in spades! Every time I see The High Priestess, she reminds me of the magical powers of Maleficent from Sleeping Beauty (my kids mentioned it too.) It's clear to see the abundance in the Empress card and the surrender of the Death card. The horse rearing in the Chariot card gives a strong feeling of immediate movement.

Two of my favorite cards are the Hermit and the Star. They both have a tranquil, peaceful feel to them, but they are very different from one another at the same time. The artist has done a spectacular job of illustrating the images to match the essences of each card.

I used this deck for my daily draws for a week. It was a week during which I was going through a palpable spiritual transformation, and the Death card came up every single day! The cards seemed to be very much tuned in to my energy for the week, as I continued to pull positive and transformational cards.

The Book
The 110 page softcover book is same size as the cards. There is a whole lot of very detailed information packed into this little book. The introduction includes details such as how to use affirmations, how to know when you are receiving inner guidance, what archetypes are and how they work, feminine spirituality, and much more.

There is a black and white image of each card, along with keywords and an affirmation. The artist/writer was most thorough in her accompanying text for each card. Each image is followed by a paragraph describing the meaning of the card. This is followed by relevant famous quotes and/or poems, and ways to affirm this card's meaning in your life. Then there is a Contemplation section which asks several questions of you, to make the card personal to your life. There is also an exercise for each card, which may be a reading spread, an art project, a visualization, a writing prompt, etc. And lastly, there is a final prayer (which is also compiled on the extra Wisdom Card Prayer Guide).

The book is such a fantastic spiritual resource in and of itself. There is an amazingly great amount of spiritual guidance that Wells has managed to squeeze into such a small volume. Final Thoughts
I was very impressed with this deck/book set. I think it is an outstanding deck for those interested in positive, spiritual affirmations. It would be a wonderful deck to help select a positive affirmation at the beginning of each day. It would also be a fantastic choice for a meditation tool.

As a tarot deck, I found the cards to speak to me strongly on a spiritual level. I can recommend the deck if you are a woman (or read for women) with soulful inquiries. The cards being geared toward the inner goddess, coupled with the fact that it's a Majors-only deck, limits its usage as a reading deck, and for that reason it is not one I would choose for an everyday, all-purpose reading deck. However, its specific design makes it a perfect choice when looking for just such a deck, or to pull out for certain readings.

The book is a fabulous resource for spiritual growth and goes a long way in empowering you to take a proactive stance in your life and in following through with the cards' messages for you. 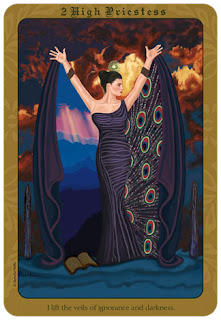 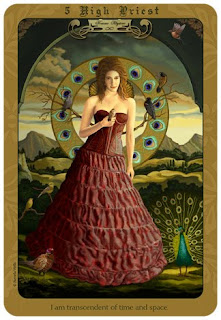 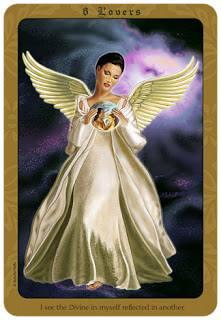 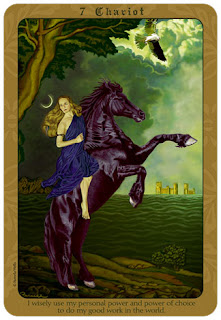 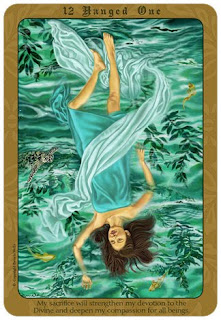 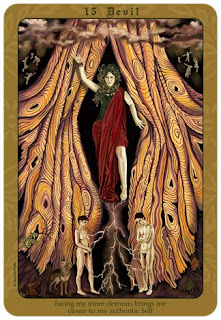 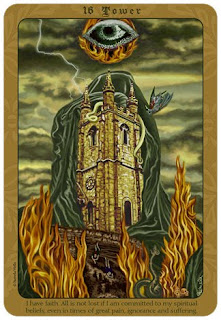 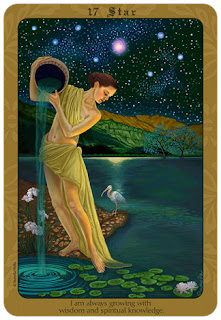 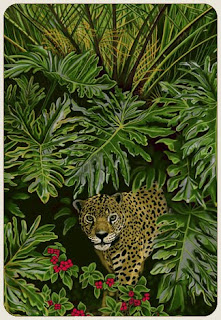 Deck: Affirmations for the Everyday Goddess