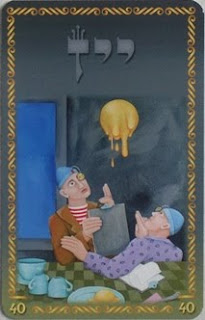 The "72 Names" Cards is a self-published deck from Israel, created by metaphysical artist Orna Ben-Shoshan. The deck offers cosmic messages according to the secrets of the Kabbalah and the "72 Names of God". Not knowing anything whatsoever about Kabbalah, Orna assured me that knowledge of Kabbalah wasn't necessary to receive accurate messages from this deck. The deck is easy for anyone to work with, provided you approach the cards with openness, consciousness and honesty. While I assume experience with Kabbalah (or even reading Hebrew) would be an added benefit to reading with these cards, I can attest to the fact that it's not necessary.

The Cards
There are 72 cards in the deck, each measuring approximately 2 7/8" x 4 5/8". They are covered with a glossy laminate. The backs of the cards are blue, and feature muted images of Hebrew lettering, and a logo in the center, with the title of the deck. The backs are not reversible, but the cards aren't designed to be used with reversals, so it's of no consequence. I admit the backs are a bit boring compared with the vibrant artistry in the deck itself. But again, they are backs, which I don't pay much attention to anyway.

Each card is numbered in the bottom corners, and also given a Hebrew title, corresponding with one of the 72 names of God. The names are not referenced in the LWB.

The compelling artwork in the cards is colorfully surreal. Most of the cards have a fascinating fantasy element in them. People hovering in mid air, characters creating a bridge one floating plank at a time, human bodies with inanimate or inhuman heads, etc. There is a fantastic sense of the bizarre in the world these people inhabit. 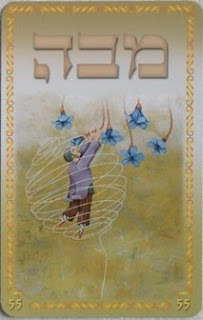 Several of the images bring to mind familiar references. For example, there's an image (below) of a woman on a large balcony with a man floating in the air on the outer edge of the balcony. This reminded me of the scene in Aladdin where Jasmine asks the floating Aladdin how he was doing that! Another card (also below) reminded me of a female version of The Last Supper. And interestingly enough, there is a card (see right) that looks like it came straight out of a story I wrote years ago, which was quite a surprise to me!

Aside from the images that remind me of things I already know, the majority of the cards spark intuitive messages that are new and fresh. The surreal, unrealistic scenes set a beautiful stage for metaphorical interpretations. Even if you never crack open the LWB, and never discover what the cards are "supposed" to mean, it is a great deck to let your imagination and intuition run wild.

The deck comes with a synchronously numbered 72 page LWB. The interpretations for each card are comprised of three parts:
The LWB advises only one card be pulled for each inquiry, or at the very most two, if the first card was unclear. This system simplifies things, since no spreads are needed. Just ask a question and pull a card. The author assures the reader that the card will always be relevant to the situation, even if it doesn't seem to make perfect sense right away. 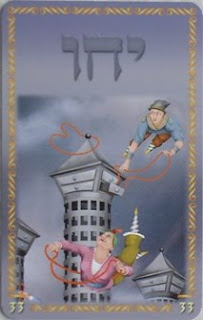 How it Reads
After working with the deck for a full week, I can say that the cards I pull for my inquiries are always interesting, and eerily on point. For example, when I inquired about clearing away clutter, I pulled a card showing people in the act of untangling things. When I asked about someone from my past, I drew a card that specifically spoke about dealing with issues and people from the past. When my interest in sewing was revived, I turned over a card showing a needle and thread. Another card showed (with minute detail) a project I did with my kids, while yet another accurately illustrated a dream I had.

Each card I drew featured artwork that spoke directly to my inquiry. Turning to the interpretations in the LWB was a different story. Sometimes the written meanings made sense, and sometimes they didn't seem to. But upon further reflection, I can see that they added a different layer to the first, more obvious, interpretations. The meanings added depth and expansion to the readings. Like the creator says, although it might not make immediate sense, the card pulled will give you the knowledge needed for the situation, even if it doesn't seem clear at the moment. So I do very much like the process of making an intuitive interpretation at first, based on the visual in the card, and then turning to the LWB for that deeper layer of meaning. It seems to give a well rounded answer to the question. 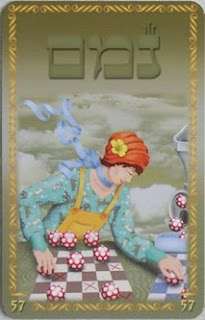 Final Thoughts
I have really enjoyed working with these cards. I'm a big fan of surreal artwork in general, and the way it allows your imagination to soar. I find that the imagery in this deck allows great freedom for intuitive juices to flow, which is always a plus when doing a reading.

The LWB is also thoughtfully written and a valuable addition to the deck. Orna Ben-Shoshan has created a deck that is not only beautiful, but substantial as well, and I highly recommend it to readers of any expertise level, from beginners to life-long readers.

The deck may be purchased directly from the artist here. At the time of this review, the Limited First (collectible) Edition is available, signed by the creator.

See below for more images from The "72 Names" Cards deck. 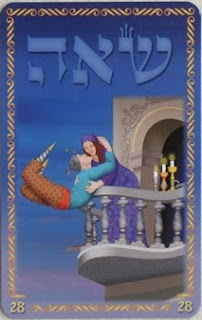 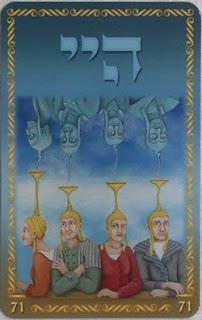 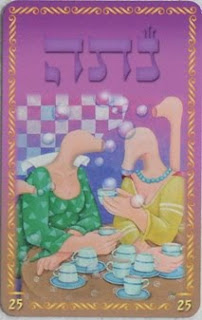 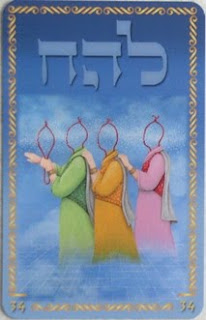 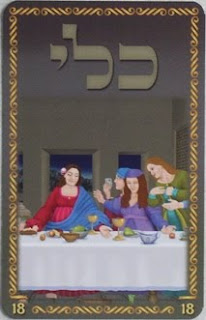 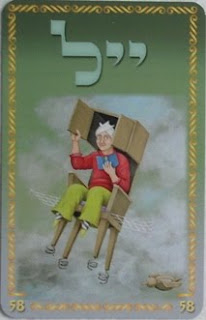 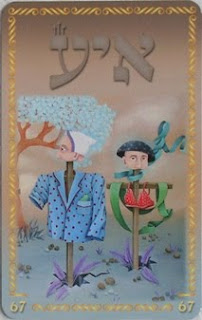 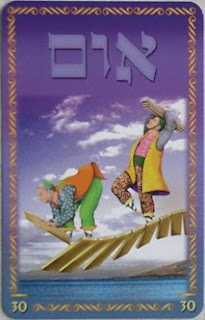 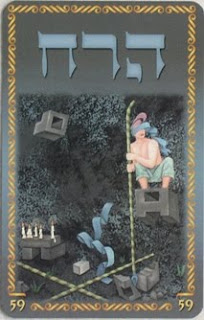 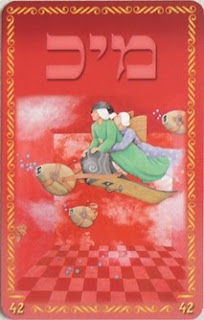 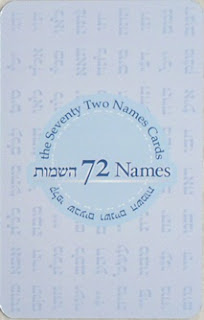