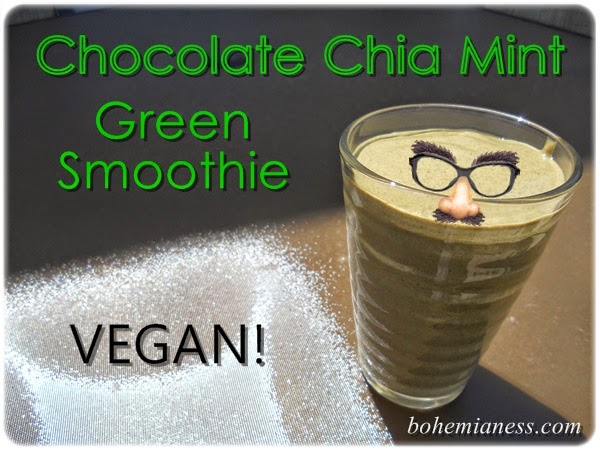 Okay, so I'll start with the obvious. I put the nose glasses on the photo as a joke, but then my daughter insisted that the photo stay that way because without it, it was just an ordinary smoothie. She urged me so vehemently to be different.

She said, "No one else has that on their smoothie pictures!"  And I said, "With good reason." But it caused so much laughter that I had to include it, because why not? Why not be ridiculous when given the chance?

This smoothie is awesome.

Throw everything into your blender (preferably a high speed blender like my soulmate, the Vitamix) and blend on high (about 30 seconds with the Vitamix, a bit longer with a normal blender).

This smoothie gets thick as it sits (as the chia seeds set), so drink immediately after making.

*I buy pre-washed bags of fresh spinach and stick it in the freezer to have on hand for smoothies. That way it never wilts or goes bad. So my "fresh" spinach is actually frozen, but it's not the kind you buy frozen.