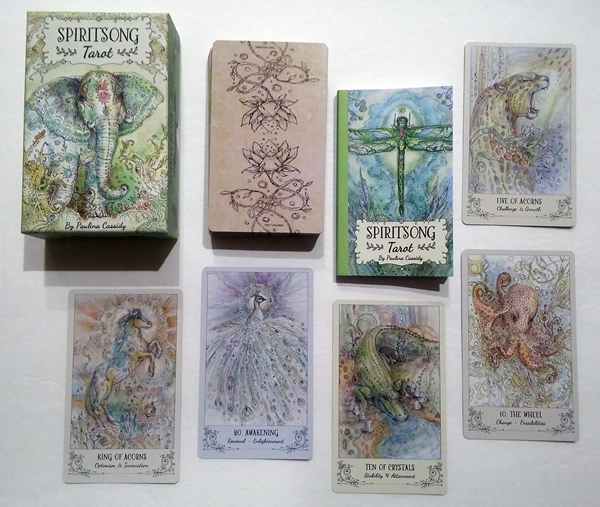 Spiritsong Tarot is a lovely tarot deck by Paulina Cassidy (creator of the Paulina Tarot and Joie de Vivre Tarot), and published by US Games Systems, Inc. 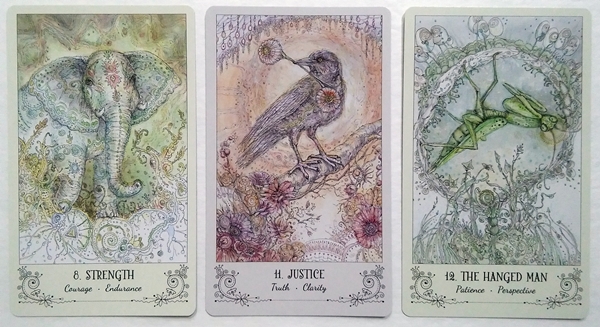 The Cards
The cards measure 3" x 5". The book and cards come in a sturdy box with a lift-off lid which has half-circle cut outs on the sides for easy lifting. The card finish is a nice matte with light sheen. The backs have a beautiful reversible design (shown in top photo). There is a thin white border, which I think frames the detailed artwork well. Featured at the bottom of the card are the number, title, and two keywords, along with a whimsical design.

If you are familiar with Paulina Cassidy's artwork from her other tarot and oracle decks, you will recognize her signature minute detailing. If I had to choose one word to describe this deck, it would be gentle. That word comes to me every time I think to describe it. The deck is colored with soft pastel tones.

The suits are re-named (a pet peeve of mine) as follows:

Some of the Major Arcana cards are renamed (which ironically doesn't bother me at all):

The Traveller: The Fool
Shaman: The Hierophant
Love: The Lovers
Transformation: Death
The Shadow: The Devil
Awakening: Judgement

There are no element-suit associations. For example, the Shells/Cups cards aren't associated with water, so they don't feature animals solely found in/around the water, Feathers/Swords aren't only flying creatures. In fact, there is not one single feathered animal in the Feathers suit. That strikes me as really, really bizarre.

I do wish the cards had featured the animal's name on the bottom of the card. Maybe instead of two keywords, they could have put the animal name and one keyword. Most of the animals are instantly recognizable, but some are a bit more obscure (e.g., jackal) or difficult to distinguish from others (e.g., crow vs. raven).

My favorite animal (manatee) is missing from the deck, but I love that there are some lesser seen animals in this deck (lobster, eel, meerkats, armadillo, porcupine, hedgehog, aardvark, walrus, etc.) in addition to the more popular animals you expect to see.

There are seven feline cards:

There are four canine cards:

As a cat person, I like this ratio just fine! ;)

But on the whole, there are more birds than anything in this deck: Raven, Eagle, Crow, Swan, Owl, Hummingbird, Peacock, Falcon, Dove, Crane, Penguin, Pelican, and Flamingo. Thirteen birds, and not one in the Feathers suit! Come on, that is weird, right? 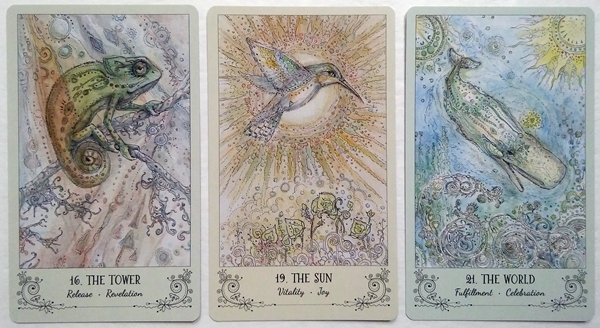 My favorite card in the deck is the sweet sleeping bear in the Four of Feathers (Swords). I also love the choice of a hummingbird as the Sun card, because I've never seen anyone in real life less than delighted upon suddenly seeing a hummingbird.

The images are so soothing, I can see this as being a great deck to use for someone who is in need of healing or going through a rough patch, as the vibe is so peaceful. And obviously, it would be a great one to use with kids as well. 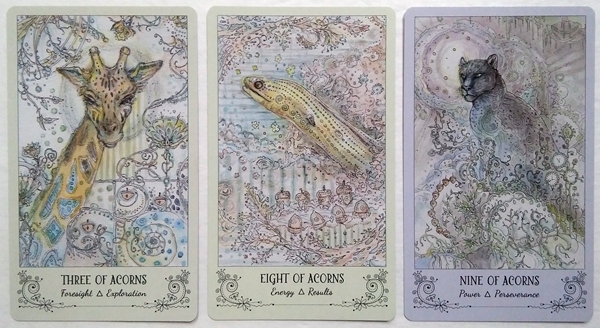 How it Reads
The animals in the cards are not performing any tarot-esque actions. It's more like a portfolio of animal headshots. So for me, this doesn't read like a tarot, but more like an animal spirit oracle. And I find the cards are more suited for single card draws, or layouts where each position means something different, where you don't need to see how the cards play off each other (because they don't, they are static figures).

I am personally happy to consider this a spirit animal oracle, because most animal oracles have much fewer cards, so this one has a full 78 animals, making it a much more expansive choice than other animal decks.

One morning I had asked the universe for peace that day. Less than an hour later, I later drew the Star (Swan), and one of the keywords on the card was "Peace"! I couldn't believe it. What an amazing synchronicity! It felt like such gentle reassurance.

The next day I drew the Queen of Feathers/Swords (Bat), and I was put in a situation where someone was attempting to manipulate me. This card had reminded me to keep on alert, and to be brave in the dark situation.

Next, I drew the Ace of Crystals/Pentacles (Panda), which often reminds me of a "treasure". That day I found an item in a store that I had been looking diligently for almost a year! It was quite a treasure indeed!

I drew the Nine of Crystals/Pentacles (Spider) on two occasions. Once I drew it an hour after I was offered more work hours. I thought I would jump at the chance for more money, but could no longer compromise my physical well-being by getting only three hours of sleep most nights. I said I could only continue with night shifts, not day shifts as well. At the moment, rejecting more hours felt counter-intuitive to the idea of abundance, but it was something I needed to do. A little while later, something inside me told me that by doing what was right for me, instead of what was right for my wallet, I would now be standing in the path of an opportunity that was better aligned for me. I was being called to trust that abundance will still be there when I choose self-care over money.

The next time I drew the Nine of Crystals/Spider, it was Thanksgiving day. Perfect timing for being grateful for the abundance already in one's life.

I drew the Lovers (Wolves) one day. The night before, I had done a meditation where I received the message to love, and to imagine myself surrounded by heart bokehs. This card reminded me of that.

One day I drew the King of Crystals/Pentacles (Tiger) and I can't remember anything relevant happening that day. It happens.

The next day I drew the Ace of Crystals/Pentacles Panda again. I was sick that day and slept pretty much all day. Pentacles is the physical suit, and the Ace is the basic, fundamental starting point. I was doing the bare minimum to just keep breathing that day.

One day I drew two cards from my Haunted Oracle deck, receiving the Spirit Animal and Madness cards. The Madness card referred to a relative, and the Spirit Animal card told me to consult a spirit animal for more help on the matter. So I pulled out the Spiritsong deck asking who wanted to help me on that subject. I drew the Five of Acorns/Wands (Leopard). This card speaks of shape-shifting to overcome challenges, and it sparked a train of thought in me, leading me to a couple of healing books I have that reference shape-shifting magick. It was such an intuitive flow, from one deck to the next, and then to the books. It was a super helpful suggestion, one that I was so grateful for.

I felt like this deck was very tuned into my energy, my needs and moods. I never used it for anything other than single-card draws, because as I said, without any action happening in the cards, they don't have a flow from card to card. But for single card draws, they were very helpful and insightful, and often just the soft, comforting presence I needed. 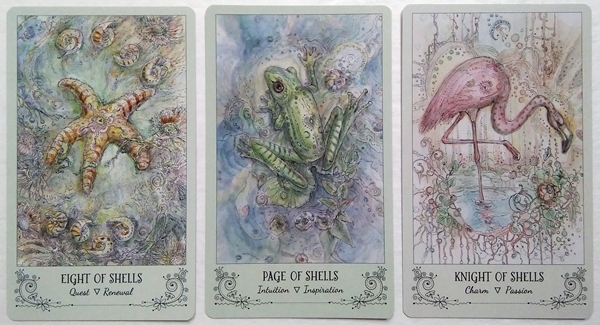 The Book
The 108-page book is just about the same size as the cards. There is a brief introductory section covering the basics of elements and suits.

There are no images of the cards in the booklet. Each passage begins with the card title, animal name and keywords printed on the cards. There is a Message (card meaning) followed by additional Keywords, brief Reversed Message and Reversed Keywords.

The meanings don't go into information on the animals in real life, but use the animal as the character whose traits embody the card's meaning. Here is an example, using the full excerpt for one of the cards:

Page of Shells (Cups) - Frog
Intuition and Inspiration
MESSAGE: A walker between water and earth, Frog is your messenger in transition, helping you to reveal the song of your soul.  He inspires you with a more rooted connection to your emotional self as you grow into something new and even more wonderful. Frog is a natural romantic with a heart brimming with love. He encourages you to express your feelings, as this will awaken passions and invigorate your heart.  Infinite possibilities of the imagination will set you in motion to unleash hidden talents. Jump at the chance of starting a new, exciting project that strikes your fancy.

REVERSED MESSAGE: When illusions are shattered, believe that you will see things in a new light. Avoid repeating old patterns.


I find the LWB to be well thought out, with as much attention given to the Minor Arcana cards as the Majors.

The book closes with a section on connecting with the cards, followed by several spreads:


There are two blank pages for notes at the end of the book. 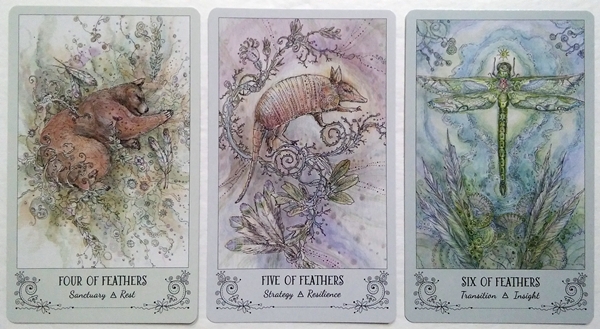 Final Thoughts
This is a very lovely, soothing, calming, gentle deck. It is appropriate for all ages, and if you have any of Paulina's other decks, they will obviously work beautifully together. While it doesn't read like a traditional tarot, when I used it for single card draws, it got just the right messages across. I find myself turning to this deck when I feel overwhelmed and need a message that won't kick me while I'm down. It is also now my go-to deck when I feel the need to call on an animal guide for help. I draw a card to tell me which animal I am meant to work with at the time, for a particular issue, and so far the animals drawn have always been very well suited to my issues. It is a beautiful deck in so many ways! 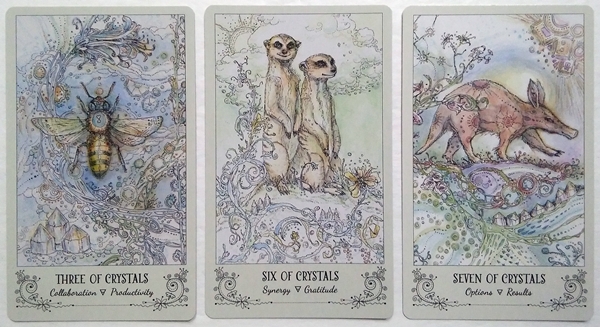