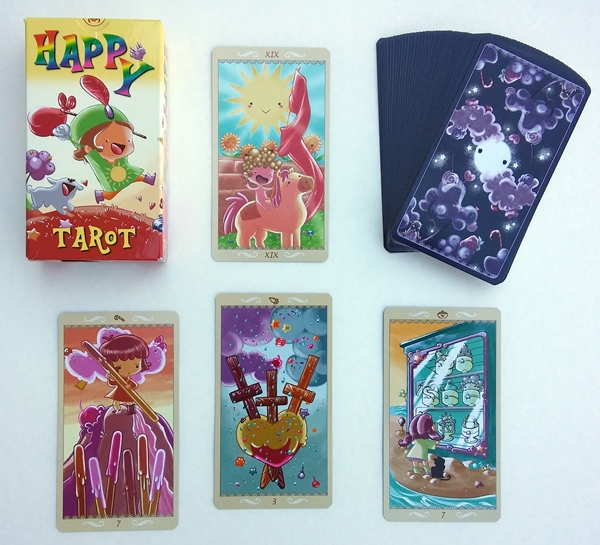 Happy Tarot is an adorable tarot deck abundant with children and sweets, with illustrations by Serena Ficca, published by Lo Scarabeo.

The Cards
The cards measure approximately 2 5/8" x 4 3/4". They are the standard (awesome) Lo Scarabeo card stock, shuffling beautifully. The backs are reversible. The design on the back is a moon with black circle eyelashed eyes surrounded by stars and purple clouds filled with treats (candy and fruit) and a couple of owls.

The borders are are a light beige with no wording on them at all, only numbers and symbols. The Major Arcana have Roman Numerals along the top and bottom borders, which is redundant. I don't know why they felt the need to print the numbers on the cards twice. The Minors have regular (non-Roman) numbers on the bottoms and the suit symbol at the top (Candy Canes for Wands, what looks like an ice cream bowl for Cups, Swords and Pentacles). The Court Cards each have the suit symbol on the top border and the Court symbol on the bottom (What looks like an arrow or magic wand for Pages, a toy stick horse for Knights, a small crown for Queens and a larger crown for Kings.)

Before I got the deck, from the scans I had seen online, I thought it might be way too saccharine. Like I could feel my teeth ache from looking at some of the images loaded with candy, imagining the entire deck to be overly sweet. But when I had the deck in hand, I was surprised to find that it didn't feel that way at all. Sure, it is obviously a sweet deck, there's a lot of candy in the images. But there is enough otherwise going on in most of the cards so that it doesn't feel overly dripping with sugar.

Most of the cards feature kids smiling, often with wide open mouths, sometimes maniacally so (like in The Sun). Even the nudity in the deck is adorable, as the private parts are covered up by tiny hearts!

The Hermit, one of my favorite tarot cards, is my favorite card in this deck. The colors in it are so gorgeous! I love the darker, richer colors in the Eight of Cups and Two of Swords. I find the Eight of Cups really pretty. The clouds in the Aces remind me of the show Adventure Time, and all I can see when I look at the Nine of Wands is the face of Charlie Brown! The scene in the Seven of Cups is so cute, with a little girl and a cat on a beach looking at a window display of cups filled with treasures. And the old woman's face in the Five of Pentacles is so sweet!

The little figure sneaking away in the Seven of Swords is adorably wrapped up in a kerchief, the only part of the face showing is closed eyes. The Lovers card is hilarious, with the man jutting his stuff forward with a cheeky grin, hands on hips, "Look at me!" while the woman holds her hands up to her face in delight.

In the Five of Cups, I can actually hear the kid crying and whining. And in the Five of Wands, there is one kid that cracks me up. There is a group of kids fighting with clubs and this one kid has his mouth wide open, screaming, with his club in both hands over his shoulder, and you can tell he is just about to swing that thing around like a baseball bat to whack the other kid upside the head. But there is a kid he doesn't see behind him who looks like he will get hit with it first. It's just a really funny scene.

I love that the Nine of Swords is almost bare of sweets. There are nine plain wooden swords on the wall behind a little girl up in bed, with her hands over her eyes. Her blanket has roses on it. Her headboard has a purple swirl on it like a lollipop without a stick. And in her side drawer is a subtle package with a picture of a wrapped candy on it. So there is no crazy sweets-action going on here to detract from the drama of the card.

There are a couple of cards that feel off to me. The girl in the Nine of Pentacles has a face/head that feels like it is proportioned differently than the other characters in the deck, so it stands out to me. The nose of the girl in the Six of Wands looks unnatural to me, maybe because most of the characters don't have noses, and this one is really oddly pronounced/shaped. And the woman in the Ten of Pentacles, who appears to be a grandmotherly type, has a sort of warped facial expression in both the eyes and mouth, like she's had a stroke.

The Knights are each riding some sort of toy animal. The Knight of Wands is on a toy horse with wheels. The Knight of Cups is on one of those playground coiled-spring animals shaped like a seahorse. The Knight of Swords is on what looks like a patchwork plush horse. And the Knight of Pentacles is on a rocking horse. Too cute!

How it Reads
One of the first readings I did with the deck was a daily draw, and I drew the Seven of Wands. At the time, that card was my reminder to stay high vibe. To stand above my negative thoughts and keep them at bay. It was very fitting that the Happy Tarot bring up this card for me.

Another day I did a reading on a friend's erratic behavior, and I got cards that showed what was going on behind his feelings, and what I could do to be less affected by it. It was an extremely accurate and very to-the-point reading. The reading ended with the High Priestess, telling me to meditate and keep control over my own emotional reactions. It was a reading that this deck handled very well without sugar coating or being silly about it.

On another day, I was stressed out about having to do a ton of stuff to prepare for something I didn't want to do in the first place. I drew a card to ask for the best way to deal with it all. I drew the Nine of Cups, which told me to be happy no matter what. All is okay. Act as if it were just all going to be okay. So I did that, stopped stressing out and just went on with my preparations. As it turned out, the plans were canceled so I hadn't needed to stress out (or even prepare at all!).

One day I did a Mind-Body-Spirit reading on Instagram using this deck. I drew:  MIND: Wheel of Fortune (My mind is all over the place, like it always is.). BODY: Four of Swords (My body is getting just the right amount of rest. Like Goldilocks.). SPIRIT: Ten of Cups (Looks like my spirits are vibing pretty high and happy right now.). Just need to do some work on that monkey mind.

The last reading I did with this deck the week I worked with it was late at night. I asked what I should do with the hour I had left before bed. I drew a card then looked up and realized I didn't even have an hour left, it was already time for me to go to bed. So I looked down at the card. It was the Six of Wands which told me to be happy with what I had already accomplished that day. No need to do anything more. How apt! So then I asked if it would be better to go to bed then and there or stay up late (as I thought I had more time). I got the Five of Wands, which told me not to steal time from myself, but go to bed at a decent hour. (Well, decent for me, as I am usually up until at least 3 a.m.). Finally, I asked what I could do to make the next day a great day. I laughed when I turned over the Eight of Cups, which shows a little boy headed toward a sleeping moon. Go To Bed Already!!! the cards were shouting at me! Leave all the stresses behind, leave all behind, go to sleep and expect a great tomorrow.

This deck has read wonderfully for me for a great variety of different inquiries. It doesn't beat around the bush. I find that it always answers my questions quite directly and frankly. Ironically, I never received a reading that was sugar coated.

The LWB
The LWB is 63 pages, with only the first 22 pages in English. The other pages are translations in Italian, Spanish, French and German.

The first two pages talk about the ways tarot cards can be used and inviting you to use this deck for fun and positivity. The next page is titled "Using the Cards" and tells you how to read the meanings, with a quick sample three card reading.

The rest of the booklet is devoted to the card meanings. The meanings do not address the card images. Each card is given a couple sentences of basic/standard meanings. What is interesting and different about this deck is that following each meaning, a sentence is given in italics, telling you how you can find happiness. Each of these sentences start with the words "You can find happiness...". I will give a few examples below:

I think this is such a great addition to this deck. I really like this unique added touch to the LWB.

Final Thoughts
This is a decidedly happy deck (the name is no joke), so I would definitely not pick this deck up to read about something super somber or serious or important. This is a lighthearted deck. One that I would use if I needed a pick-me-up. If I were feeling a little blah and wanted something to lift my spirits. Or if I were already in a really good mood and wanted a reading to reflect my frame of mind. This would obviously be a great deck to use with kids. It is also a great one to use for daily draws, or just for a theme for the day. It always gave me accurate and direct readings. I was pleasantly surprised that I didn't get any fluffy readings with the deck.

In the middle of writing this review, I felt like I had used some form of the word "adorable" maybe a few too many times. Indeed, I had used it 7 times, so I had to go back and come up with some other adjectives. So if I were to sum up this deck in one word, clearly it would be ADORABLE!

Deck: Happy Tarot, by Serena Ficca, published by Lo Scarabeo, distributed in the US by Llewellyn.