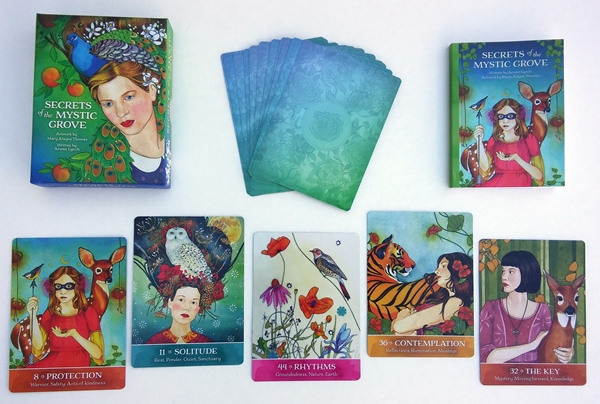 Secrets of the Mystic Grove is a stunning new deck from US Games, illustrated by Mary Alayne Thomas, with the accompanying booklet written by Arwen Lynch. It is available to pre-order (directly from US Games or Amazon) with a current release date of June 16, 2017.

The Cards
The 44 cards measure 3 1/2" x 4 3/4". The cards and book are housed in a very nice sturdy box with a lift-off top. The box has a nice smooth feel to it, and there are half-circle cut outs on two sides of the top for easy lift off.

The backs are not reversible. The design itself isn't very noticeable when reversed, but the colors fade diagonally down the card from blue and purple to green, so it is very obvious when one is reversed. The backs are oddly not all colored the same. There are slight variations to the colors, so when you fan them out upright, there are differences. In the upper left corner, some cards are blue and others are purple. And on the bottom right, there are varying degrees of light and dark green colors. I have been told that this was an issue with the printing process. The publisher will be discussing it with the printer, but they are unsure if it is avoidable.  The slight color variations on the backs isn't a negative in my opinion though. I think it actually looks quite nice.

The card stock is a bit stiff, but shuffles easily and smoothly. It feels like the card size is the exact perfect fit for the images. Any other dimensions would have been just less perfect. It's not something I have ever remarked about a deck before.

Three sides of the cards are borderless (thank you so very, very much for that, US Games!). At the bottom of the cards is a border with the card number, title and keywords. The border colors vary with each card, matching with the scene in the image.

The colors in this deck are sumptuous. The lines of the artwork are exquisite. Even though many of the cards are deliberately crowded, it never feels cluttered. It has a mysterious fairy tale feel to it.

There are animals in every card. Some cards only have animals in them. There are no men in the deck. When there is a woman in the card, she is the only human in the card. The only exception to the previous two statements is the card titled Adventure, which is the only card featuring two humans, and the only one with a male. In this card, a young boy and girl are riding on the back of a tiger (see image below). Another way this card stands out from the rest of the deck is that it is much simpler, much less busy with detail. It almost seems like a card from a different deck. But it's gorgeous and I love it.

It's hard to pick out favorites in this deck (though I'm partial to those eye-masked beauties), because they are all honestly beautiful. What is more remarkable to me is that when looking for my least favorite card or two, I couldn't come up with a single one. There isn't a card in this deck that I don't like the look of. That's pretty incredible.

While there are a lot of cards with a similar feel in the deck, there are two which stand out to me as looking very similar (see image directly above). Direction and Letting Go both have a masked girl with similar hairstyle, facing the same direction, hand out holding something. I imagine this is the same girl on a different day.


*These cards always playfully remind me of the "stuff on my cat" challenge.

You can scroll through this review, as I have grouped those cards together so you can see the similarities.

While there is animal life in every single card, some cards focus on a main animal, with no human. Most of these animal cards also feature birds in the background. These animal cards include a bird (Northern Flicker), black bear, fox, rabbit, badger (love this card!), a Snowy Owl, two Great Horned Owls and a stag. In addition, there are the four cards that feature a pair of birds (Yellow-headed blackbirds, chickadees, and two unidentified pairs of birds). Birds are very prominent in this deck. I love the quails in the Black Bear card.

There's a huge variety of animals in the background of the cards. There are cats, tigers, cheetahs, leopards, lions, swans, deer, a flamingo, peacocks and an ostrich. There are bees, moths and a lot of butterflies. And more animals that I'm sure I have left out. The imagery is also very heavy in gorgeous flowers. The way the artist draws poppies alone is reason to have this deck.

There are some repetitive cards (cards with very similar meaning). For example, there are two cards titled Letting Go and Release. And basically, they just have their keywords and titles switched:

In the book, the former focuses more on loss and saying good-bye, while the latter deals more with healing from pain.

It's interesting to me that the Letting Go card stands out to me as being so similar to two other cards. (The similar looking Direction card, and the similar meaning Release card). This card seems not to want to stand on its own, which is ironic as its meaning is about letting go. Very interesting.

How it Reads
This feels more like an affirmation deck than an oracle, with thoughts and ideas to inspire. Although it doesn't have a fortune-telling vibe, it did do a bit of accurate predicting.

The first reading I did with this deck was one where I pulled one card from three different decks. This card (Direction) had so many similarities with the other two cards, the synchronicities were overwhelming! So right off the bat, the deck worked well with others.

The next card I pulled was Togetherness, which inspired a family game night!

On another day, I drew the Adventure card, along with the Chariot from a tarot deck, receiving the same message from both cards! This deck seems to love being part of synchronicity.

The next day, I drew Rewards and when I was out shopping that night, I received two unexpected refunds at two different stores! I also received an early Mother's Day gift from my daughter that day.

Two times that week, I drew the Release card. I didn't see how it pertained to either day, but since it repeated, it made me stop and think about what I needed to release, because there had to be something! (Isn't there always something we can release?)

On my daughter's birthday (and Mother's Day), I drew the card Seeing Differently. And it was like a friend was reaching out and touching my hand, saying it was okay. We had celebrated Mother's Day a couple days early this year, because it fell on my daughter's 15th birthday, and I didn't want her to have to share the spotlight. So that was one way the day was different.

Another (bigger) way I was being asked to "See Differently" that day was that this year, my daughter (who is up to the crown of her head deep into minimalism) didn't want to do any of our birthday traditions. No decorations, no balloons, no streamers, no cake, no blowing out a candle and making a wish, no presents. Just time together playing games. As a mother, this was the first of my children's birthdays that I haven't celebrated with traditions. It was sad for me in a way, but I had to honor her wishes. Drawing this card on that day was a comfort to me. It assured me that doing things differently on that day wasn't bad. Just other. And I was glad that my daughter wanted to spend time with us as a family, which is the most cherished tradition of them all.

There is a gentle, peaceful, comforting approach from the cards. They read with a soft touch.

The Book
The accompanying 96-page book is bound (with a spine). It has a thick card stock cover that is very smooth to the touch. The book begins with a one-page introduction and then jumps right into the card meanings. I absolutely love that there isn't a bunch of useless fluff to wade through before you get to the meat of the booklet.

Each card is given a 2-page spread. There are no images of the cards in the book. On the left hand page is the card number, title and keywords (all of which are found on the card itself). Then the page is filled with meaning. This isn't a LWB you toss away. This book is rich. It goes into detail and meaning of the symbolism and metaphors of the imagery in the cards (something sorely lacking in most small companion books). The first paragraph discusses the symbolism in the imagery, and the second paragraph talks about what it means for you in your life. The book is really fantastic. Well written, deep, thoughtful and thought-provoking.

The right side of each page begins with three journal prompts (questions to ask yourself), followed by blank lines down the rest of the page for you to write notes in.


This is a wonderful companion book. She packs a lot of value into a small space.

The book ends with a page on "How to Use These Cards" and a 3-card "Mystic Meadow Spread".

Final Thoughts
This is a gorgeous, elegant deck. It is different from anything out there. The colors and artwork are beautiful. There is a wide variety of wildlife, plant life, and stylish ladies. It is extremely unique, ever gentle and comforting. And the companion book is a treasure. I highly recommend this deck/book set for adding elegance and depth to your daily experience.

Deck: Secrets of the Mystic Grove, by Mary Alayne Thomas and Arwen Lynch, published by US Games Systems, Inc.