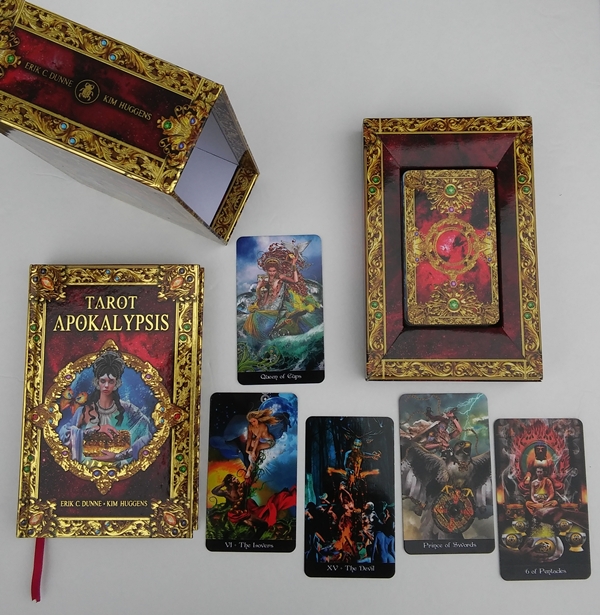 Tarot Apokalypsis is the sumptuous new deck and book set from Erik C. Dunne and Kim Huggens (who also brought us the Tarot Illuminati). I fell head over heels for this deck. It is a stunning production, from beginning to end. Both the artwork on the cards and the quality and content of the book are truly magnificent.

The Cards
The deck and book are housed together in an open-sided sturdy box, like boxed sets of books are housed. As you can see in the image above, the cards sit in a recessed box. Unfortunately there is nothing to keep the cards in place and they sit evenly level with the top of the recess. You place this into the housing box opening with the book to keep everything together. There is a bit of sliding of the cards when you do this. But when the cards and book are housed in the box, it makes for a beautiful addition to your bookshelf.

The cards measure 2.75" x 4.75" and have a glossy finish. The cards are thicker and stiffer than the usual Lo Scarabeo card stock, so not as smooth to shuffle as what you're used to from them. The backs are not exactly reversible, but enough so that you couldn't tell which end was up from the back.

There is a gorgeous extra card titled The All Gifted, featuring Pandora (see image at the bottom of this review). You can choose to keep this card in the deck or not. I keep it in mine, and I drew it in my first week of working with the deck.

The artwork is incredible. At first, I assumed the images would be too busy, but they didn't feel that way to me at all when reading with it. The colors are spectacular and the details are rich, luscious, beautiful and emotive.

One of the things I found fascinating about this deck is that the court cards (Princess, Prince, Queen, King) are represented by deities worshiped in each civilization.

It is really difficult to pick a few favorite cards to point out because there is just so much beauty to choose from. The High Priestess is stunning and mysterious. I am in love with the Tibetan Buddhist Hierophant (usually a card I rather dislike), which depicts three generations/incarnations of the Dalai Lama, with the child incarnation conversing with two monks. The feminine and fierce Hekate depiction in the Moon card. The cremation Tower. What might be my most favorite Temperance card of all time.

You can truly feel the heartache of loss in the Five of Cups. The boy shushing us in the Seven of Swords so he can make a quiet getaway. The scary figures in the Nine of Swords capturing the nightmare quality of the card with such creepy beauty. The confident, sexy swagger of the Eight of Cups. The bold homoerotic Seven of Cups. The lush greenery of the Pentacles suit, with one of the most beautiful Ace of Pentacles I've ever seen.

The artwork is very fluid and dynamic, providing intricate landscapes in which your intuition can soar.

How it Reads
I had an amazing experience just a few days after starting to read with this deck. I am studying mediumship and was reaching out to an old friend of mine who is deceased. A car is one of the symbols I associate him with. So I asked if he was around, to show me The Chariot. I drew the Four of Swords, but felt my finger linger and pull on the card beneath it, which was The Chariot!

Wondering if the Four of Swords meant anything, I noticed the fluffy white wolf and wondered if that was how he would appear to me in future correspondence? (Since then I have been noticing white wolves in my awareness more.) I thought of the fact that the Four of Swords means rest (in this case, eternal rest, rest in peace, etc.) indicating his current spirit status. The letter in the card reminded me of the notes we used to write to each other in high school. Then I read the LWB and found that the statue in the background is of Freyja, a symbol of magic, fertility, beauty and death. I will have to see if any of these symbols make a reappearance (wolf, Freyja, notes) when I try to reach him again, or if it were merely a way to get to the next card, The Chariot, my usual card for him. But the Four of Swords also told me to keep up my meditation practice, a necessary tool for exploring mediumship.

The cards hold many layers, giving your intuition extra details to work with. And although the suits represent different civilizations, when the cards are in a layout they do not feel choppy or disconnected. They blend together beautifully in readings.

The Book
The book is a thing of beauty in and of itself. It is a heavy, full-color, 464-page hardcover book with an attached red ribbon bookmark. 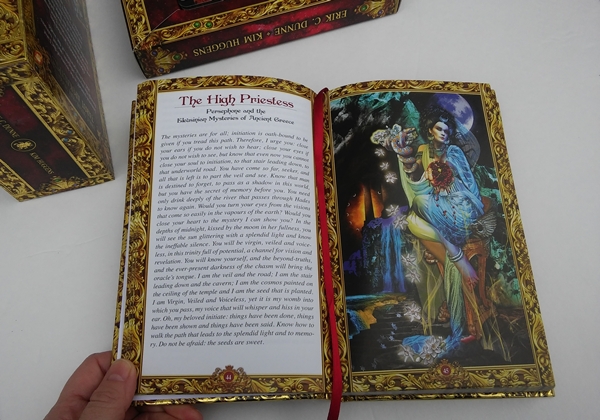 The book could warrant a review of its own. It begins with a Foreword and Introduction. This is followed by a section on Using Tarot. I usually gloss over these bits, not being a beginner. But this section was actually interesting, covering symbolism and the difference between a card invoking and evoking meaning, providing examples. The author also provides the usual tips for when you lay out your cards and draw a blank.

Next is a section on spreads:

There is a chart that lists the Major Arcana cards and their corresponding Astrological and Kabbalistic associations.

The passage for each Major Arcana card features a full-page, full-color image. (The Minor Arcana section features a color image of each card, but not full-page like the Major Arcana.) Each card begins with a passage where the card speaks to us in first person. It is a direct message from the subject of the card. This is followed by the Mystery, which describes the background, symbology and meaning of each card. The detailed background of each card is very well researched and fascinating. Next is the Revelation, which is a list of key words and phrases. Last is the Negatively Aspected, which covers the negative, the weaknesses or the reversed meanings.

The Court Cards are separated in a section at the end, rather than being housed with the Minor Arcana cards of their suits. Each of the four courts is assigned an element, and there is a chart that combines each court card's element with their suit element, giving you their elemental pair and natural phenomenon. And while two different court cards may have the same two combination of elements, there is a difference between where they lie and their phenomenon. For example:

There is also a chart that provides levels of maturity to the courts. A final chart gives each rank of the court its own strengths and abilities.

The book closes out with a section titled Continued Study, including practices and exercises such as keeping a tarot journal, daily draw inspiration, a fantastic intuitive reading idea, and other tarot book suggestions. There is an "About" page for each of the deck creators, then four pages for notes.

The book is a fabulous resource all on its own. The author goes into impressive detail on the various religious icons and mythology found in the deck.

Final Thoughts
This kit feels like a luxury in the tarot world. It is a feast for the senses. It really is so exquisite and provides such a sensory experience that words fall short when trying to explain the feelings the cards evoke.  I would highly recommend this deck to anyone.

Deck: Tarot Apokalypsis, by Erik C. Dunne and Kim Huggens, published by Lo Scarabeo, distributed in the US by Llewellyn.