The Bonefire Tarot by Gabi Angus-West is one of those decks that makes me wish I had an iota of artistic talent. The tinge of envy is quickly overtaken by overwhelming gratitude that other people have talent and that they are generous with it, so the rest of the us can enjoy it. But hey, every creation needs an audience and I am happy to fulfill that role.

The Cards
The cards measure 3 1/2" x 4 5/8", with a glossy finish. They are a bit stiff to shuffle, and the largeness of the cards doesn't make it any easier. I'm a riffle shuffler, so with this deck I find it easier to shuffle vertically, at the corners. The borders are black, and thankfully so. The black makes the vibrant colors stand out beautifully.

The black and white backs (shown in the above photo and again in the last photo below) are not reversible, but enough so. Every card is titled twice, which I found redundant. There is an official title on the bottom border, as well as the artist's rendering of the title to be found somewhere in the artwork itself. I don't know why the bottom border titles were deemed necessary.

The deck artistry is influenced by the vintage sailor tattoo style. The colors in the cards are so rich, deep and gorgeous. I find myself getting lost in them. Some of the cards remind me very distinctly of the Tarot of the Sweet Twilight (one of my favorites), in both the artistry and coloring (mostly in the Four of Cups).

It was really hard to select cards to share in this review. I want to share them all! There's something magical and psychedelic in each and every one. I love the style and color of the cards' sun rays and the sunsets' lines and colors.

One of my favorite cards is the Four of Swords, showing a woman in a bath. I loved seeing this, because this is often the advice I get from this card: Relax with an Epsom bath! I absolutely love the totally zenned out imagery in this card.

I love the hot air balloons carrying the usual suspects in the Seven of Cups. I love how the Nine of Cups has a RWS Nine of Cups card in the card. I love that the Five of Wands shows some guy punching another guy's lights out. Some of the cards are just so gorgeous I could just stare at all day. The Eight of Swords and Nine of Swords are places no one wants to be, but their portrayal in this deck are really beautiful.

I am not a fan of the pinecones as Wands. While I appreciate the originality, and understand after reading the book why it was done, it feels too cluttered for me, and the short round pinecones don't give me the same powerful vibe that the usual long skinny wands do. Symbolically, it feels to me like the power in the wands are being held back in such a small form, rather than being extended in their usual elongated fashion.

The artist says that there is some darkness in the happiest of cards, so she has also tried to add some light to the cards typically viewed as negative. I liked this holistic idea very much, and as you will read further on in this review, I had the opportunity to receive good news from a negative card (The Tower) as a result of that purposefully added light.

How it Reads
I don't read with reversals, but I somehow found myself in a three-card reading (see photo below) with two reversed cards, and I kept them reversed, because their meanings were immediately apparent to me and I wouldn't have gotten the same message if the cards were upright. This is a very visual and symbolic deck. It is an absolutely fantastic choice for intuitive reading.

I drew the Tower three times in the week that I used this deck. It appeared as my daily card two days in a row. On the first day, I had a very cathartic Tower experience, and the day after I was still emotionally raw from it.

The third Tower appearance was in the three card reading I spoke of above (photo below). It was one of the reversed cards and as it was upside down, the first thing my eye caught was the clover in the upper left corner. (Even though it's not a four leaf clover, my mind saw it as such and saw it as a good luck symbol.) I then saw The Tower falling in reverse, like pressing rewind. I saw that instead of my world crumbling apart, it was actually falling into place. This made sense with the Nine of Coins following it.

The last card in the reading was the Knight of Cups, also falling reversed. Again, as it was reversed, I saw the image differently than I normally would have. The Knight of Cups is my personal "gift" card. It's the card that comes up when I am about to receive a gift. It never fails. The first thing I saw was the liquid in the cup (gift) about to spill out, as it is being held upside down, and it looked like someone had circled it with yellow highlighter, making sure that's all I need to focus on in the card. The gift is literally spilling down into my hands. Again, I never read with reversals, but this time it was meant to be. 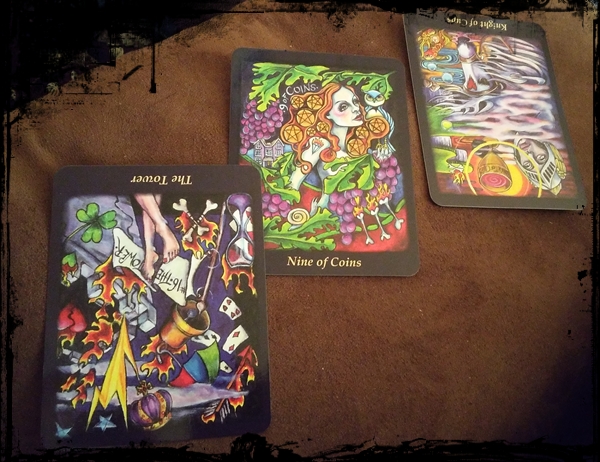 The deck reads beautifully and naturally. There is so much for your intuition to work with, and I have found that the meanings just float up to the surface, allowing you to take what you need, leaving the rest. A lot of the cards are very busy. There is a lot going on in a single image. For this reason, I would keep this deck handy for single card pulls or very small spreads, where you have the time to give each card proper attention. Or, as I said, allow your intuition to take over and let what needs to surface float up into your awareness.

The Book
The book is 192 pages. Part One begins with a welcome to the deck where the artist talks about the origins of the deck, the intriguing meaning behind the name Bonefire and some background on the artist's work history. It's a delight to read and feels like sitting and talking to a friend. You can't help but like Gabi after reading this book.

Part Two contains the cards' meanings. There is a color image of each card and a small section that gives keywords and phrases, a summary of meanings. Then there is a section with greater depth and detail into the card. This part discusses the symbols in the card's imagery and deeper meanings. You get the artist's delightful and insightful personal take on each card, sprinkled with personal experiences.

Lastly, each card comes with a list of symbols you will find in the card. At the end of the book, there is a glossary where you can look up the symbols for their meanings. (Not all symbols listed under each card can be found in the glossary for some reason. For example, there are a lot of playing cards featured in the deck, and while listed in the Symbols section under each applicable card, "playing cards" can't be found in the glossary.)

Part Three contains a section on Reading Tarot followed by three spreads, which are accompanied by gorgeous layouts painted in the Bonefire style:

Next is a two-page chapter colorfully titled Cherry-Flavored Truth Bombs which welcomes you to embrace this deck and tarot in general.

Then comes the Glossary of Bonefire Symbols. For example, if the sandcastle in the Six of Cups caught your eye, you can look in the glossary and find the meaning: Childish structures. Nostalgia. Temporary. Poor foundations. The glossary does not work in reverse, as it does not list the cards that contain these symbols.

Part Four lists acknowledgments, an "about the author/artist" page and a couple blank pages at the end.

Final Thoughts
This is one incredibly gorgeous, highly intuitive deck. It is mesmerizing and chock full of symbolism. It can be used as a beginner's deck while at the same time provide the experienced reader more than plenty to work with. The artwork speaks for itself. If it lights you up, it's definitely for you!