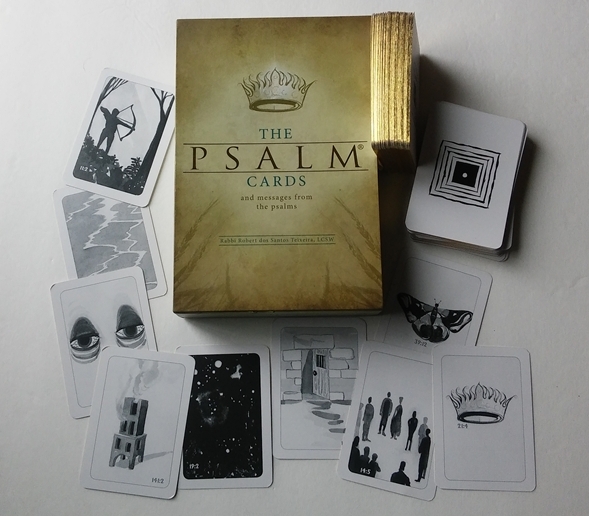 When I first received The Psalm Cards, my first thought was Oh, this is not for me. Then I read the back of the box to discover that the deck incorporates not only Bible verses and insights from one religion, but includes messages from Christianity, Hinduism, Judaism, Jungian psychology and Twelve-Step recovery. Not belonging to any religion myself, it eased my mind to know that the deck would be inclusive and diverse, rather than feeling like I'm being preached at from a single point of view.

Then I opened the box and was like, Oh, yes, this is definitely for me! I immediately fell in love with the simple black and white watercolor imagery. I loved the card stock (more on that later). And there were so many cards! I dove into the book and found that every step I took into this deck/book set, I found myself more and more enamored.

The Cards
There are a whopping 150 cards in this deck (one for every psalm in the Book of Psalms)! They measure approximately 3" x 4 1/8". The card stock is very thin and flexible. You can see in some of the images that the corners are curling up a bit. I imagine this will only get more exaggerated as the deck is used more regularly. Nevertheless, I really like the thin card stock. The cards have a really nice smooth matte finish. And the edges are gold! I find this gives it a feeling of unexpected luxury against the black and white images.

The cards come in a large box that closes magnetically, which also houses the book. There is a cut out in the box for the cards to sit in two piles. I find that they don't really fit in very well, so I have a tin that I keep my cards in. I keep the book in the box.

I love the variety in the imagery. Some cards are creepy (which I love), some are beautiful, some are hard to make out, some are strange, some are simple. There is even a card (shown further down in the review) with no image on it at all, just the psalm number 51:9 (Purge me with hyssop till I am pure; wash me till I am whiter than snow.).

My favorite cards are the ones where the watercolors look as if they are bleeding. There are some shadowy people cards that I am really drawn to. I love the simplicity of most of the card images. The deck, as a whole, has a very soft vibe to it, even the cards that are not exactly jolly. There is a peaceful feel to the deck.

And then there is a really weird card (the last card shown in this review) showing a view of someone from behind, on hands and knees, wearing what looks like a leotard or bathing suit, and we are looking at a butt/crotch shot from behind. The chosen angle of this card struck me as an unusual thing on its own, and then reading the message didn't do anything for my understanding. The card is all about waking up to the truth that you are the light of God. I suppose the image is someone crawling out of the depths of darkness into the light... but I still find it a strange angle for a drawing, or at least choice of outfit, in my opinion.

How it Reads
I have experienced a lot of synchronicity with my card pulls using this deck. My spiritual focus for the first moon cycle of the year was Moses, already chosen in a ritual at the end of last year. My first card pull of the year was with this deck, falling during that moon cycle, and the card illustrated the parting Red Sea. (Image above, Psalm Card 136:13).

On the day of the new moon, I drew a card whose description contained the advice "Make your plans known on the New or Full Moon!". I thought that was incredible, pulling that card (out of 150!) on that day.

I used this deck in conjunction with a tarot deck for the week I worked with it, pulling one card from each deck. I found that the Psalm card either perfectly complimented or directly opposed the tarot card. For example, one day I drew the Queen of Swords tarot card (which, when I draw it for myself, is the "single mother" card). The Psalm card I drew that day was regarding family. Perfect! Another day I drew the Four of Swords tarot card (a card of rest) and the Psalm card I drew spoke of resting and staying in one place for awhile.

Then another day I drew The Sun from the tarot (the brightest light), and then my Psalm card was about the Darkest Darkness! I loved that those polar opposites gave me something to really chew on.

Another day I drew the Red Sea card again, for the second time in a week. Every card I drew from this deck was either a wonderful synchronicity, was immediately relevant or gave me something to deeply consider. There wasn't a day that I didn't feel the card was helpful in some way.

The Book
The book is 176 pages. It begins with two brief sections on the numbering of the psalm verses and pronunciation of Hebrew terms. Next is the preface where the author (a Rabbi) shares his interesting history with cartomancy and tarot. From an Italian Catholic grandmother who taught him as a child how to read cards using her homemade fortune-telling deck, to becoming an adult and reading tarot cards (among other divination tools) for others in New Orleans before becoming displaced by Hurricane Katrina. He then talks a bit about his introduction to learning and praying the psalms. He came to carry his tarot deck and book of psalms in the same drawstring bag. This mingling of systems eventually led to creation of The Psalm Cards.

The next section is a "How to Use" introduction. The author suggests reading the cards from right to left, as you would read Hebrew. Whether you do this or not is up to you, obviously. There are two spreads in the book. The Seal of Solomon is a seven-card spread laid out in the shape of the Star of David (or Seal of Solomon). The second spread is called The Song of Ascents and is a past-present-future layout containing 15 cards arranged in three horizontal rows.

The card meanings start on page 18. There is a page for each card, which includes a black and white image of the card (which is nearly life-size). The Psalm number is listed at the top. The verse is first written in Hebrew, then beneath it in English. There is then a key phrase in bold, followed by a paragraph of meaning and advice. There is often a key concept within the paragraph that is also shared in the Hebrew language.

The meanings go deeper into each psalm, digging out the meaning. The author also gives concrete advice for modern everyday life.

If you don't have the cards handy, I can see using this book as an oracle, since every page is devoted to a single card. Just flip through the pages until you land somewhere and read that page's message.

At the end of the book, there is an Appendix of Power Words. There are power words in each psalm, and these are listed in order in this appendix. If you resonate with a particular card, you can use the power words (given in English and Hebrew) as a mantra to help you embody the message.

Final Thoughts
My experience with this deck is an excellent example of the saying "You can't judge a book by its cover". I did just that, initially, and was so delighted to be proven wrong. This is a wonderfully rich and beautiful deck. I really enjoy the artwork and the card stock, and the book is a treasure as well. You can use the cards as an ordinary oracle (which is how I use it), or if you are interested in studying the psalms, you can work with the cards in order. While the deck is religious in nature, it is not dogmatic or exclusive. There is wisdom in it applicable to anyone. You do not need prior knowledge or even familiarity with the psalms to read with it.