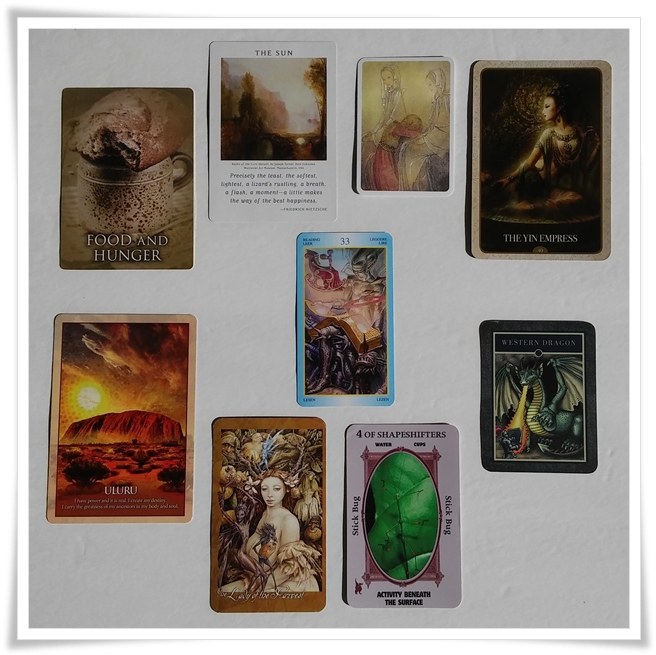 This is the reading I did for myself this year on Halloween night. I used my Lifting the Veil - An Otherworldly Halloween Spread.

I was in awe as, card after card, I turned over images with the same beige color scheme. It wasn't until I reached the 7th card that color entered the reading. Then it was two green cards in a row. The final card I knew would have blue in the borders, but the inside colors fit pretty well with the first cards.

The last time I did this reading, I remember delighting in how the cards really connected with each other, and the same thing happened this time. In fact, there was so much synchronicity within the cards, and aligning with my recent experiences that it was overwhelming and I found myself lost in the tangles a bit.

1. Message from the Dead (Human spirit)
Past Life Oracle Cards - Food and Hunger
When I first created this spread back in 2009, I knew it was my grandfather who came across in this position. This year, I didn't recognize the person leaving me this message. Since I decided to use the Past Life Oracle, I wonder if it is actually myself, from a past life, talking to me.

This card indicates that in the past, I lacked for sustenance. The message here is to release any fears I have of deprivation. To open up to abundance.

2. Message from your Spirit Guide
Art of Life Tarot - The Sun
The quote on this card is from Friedrich Nietzsche: "Precisely the least, the softest, lightest, a lizard's rustling, a breath, a flash, a moment - a little makes the way of the best happiness." I am to delight in the small things.

3. Message from your Guardian Angel
Angel Oracle - Courage
When I was shuffling these cards, I was thinking about how it is said that we always have at least two guardian angels. But here I was asking for a message from only one of them? When I turned the card over, I smiled at the magic. The card shows two guardian angels. Amazing.

Yes! I have two! And they are covering me from all angles. There is one to the left and one to the right. One is leaning forward a bit, and one back, so my front and back are covered as well. Also, one's head is tilting slightly up, while one is tilting down, so above and below covered.

I looked at the slumped human figure in the middle, and intuitively knew that the angels were not saying that there is no need to cry... they are saying it's okay to cry. It is safe to feel whatever I feel, which is very comforting. (I was later to find this same sentiment in another card in the spread, from the Faeries' Oracle.)

I feel like the girl in the card can't see the angels, and doesn't even know they're there. I can relate to this, as I have mixed feelings about angels. I don't believe or disbelieve in them. I can't see them or feel them. This card is saying that they are there either way, whether I believe they are or not.

Update 1: Four days after this reading, I was offered an angel oracle deck to review. Perhaps the angels are trying to reach out. A couple days later, I was offered two more angel decks to review!

Update 2: A couple days after that, I connected with two of my angels, for the first time. It was pretty incredible, real or not.

4. Message from an Ascended Master
Kuan Yin Oracle - The Yin Empress
I no longer have my Ascended Masters Oracle* deck, which would have been my first choice for this card in the spread. So I selected my own Ascended Master and asked her to speak for ALL of the masters in her guidance.

The Yin Empress speaks of peace, prosperity and success, but most of all divine feminine empowerment. This is a great bit of synchronicity, as I am currently reading Rise Sister Rise, which is all about rising into your divine feminine power.  I can see that this will be a strong theme for me right now.

*I rectified this situation and ordered the Ascended Masters Oracle Cards so I could have it again.

5. Message from the Nature Spirits
Earth Power Oracle - Uluru
The affirmations on this card are: "I have power and it is real. I create my destiny. I carry the greatness of my ancestors in my body and soul." This card is about creation, blood, magic, and fertility. Again I see the theme of divine feminine power here.

Update: A few days after this reading, I was on Instagram and looking through some random person's posts, when I clicked on a photo and saw that it was tagged #Uluru. The photo wasn't scenic, so I had no idea it was in the vicinity of Uluru until I saw the tag. I had never even heard of Uluru until I drew this card, and now it shows up twice in as many days? Amazing synchronicity and confirmation.

Second Update: A few days after that, I was watching Lost with my kids, and it was the episode where Rose and Bernard went to Uluru for healing. Uluru!

6. Message from the Faeries
The Faeries' Oracle - The Lady of Harvest
The first thing I saw when I looked at this card was a lady sitting still while everyone around her brought stuff to her. I heard, "Sit, and everyone will bring everything you need to you." When I drew the next card in the spread after this one, and skimmed the companion book, I saw the same message. (More on that when I get to the next card.)

This card also  connected with a previous card! There is a passage in the the Faeries' Oracle book that says "Cry if you need to, be joyful if that is appropriate, but in either case trust the process, acknowledge what you feel, and prepare to move on." This was the exact sentiment I received earlier from the angel card in spot 3!

The next thing I felt from this card was that it has a very Autumnal feel to it, which is appropriate. It's a time between good harvest and things starting to die and rot. Leaves are falling, colors changing. It's a time for change.

Although this card speaks of harvest, it is a card of grief, loss and release. There was a lot of synchronicity when I drew this card as well. I haven't used this deck in awhile, so I skimmed through the book to see if something would catch my eye. What kept leaping out at me from the pages were the words "letting go". At the exact time I was seeing those repeating words, my daughter was singing the Frozen song "Let it Go". Three times, she actually sang the words "let it go" at the exact moment when my eyes were on the very words "let it go" or "letting go". If this isn't a sign, I don't know what is!

So I need to contemplate what seriously needs letting go of, and I need to let it go freely.

Update: The message of "letting go" is EVERYWHERE for me. I see it multiple times a day, every single day since I did this reading on Halloween. (And as I write this, it is November 12.) This is the strongest  and most persistent message I am currently in the midst of.

7. Message from the Animals
The Animal-Wise Tarot - Four of Shapeshifters (Cups)
The stick bug or walking stick. This was the first spark of color in my reading. I skimmed through the book on this one too, as it's a fascinating book. This is where I found the synchronous message I received in the previous card. There is a passage in the book about how the walking stick has the ability to remain very still for a long time. The author ties this into meditation (which I had been practicing without fail for a couple weeks leading up to the reading, and continue still). He suggests that if you remain still, the right path or course of action will reveal itself. Meditation brings results. Something is being offered, and only from a place of stillness will we recognize it. Exactly the first message I intuited from the Faeries' card!

I need to prepare for what I want quietly. To continue my meditation practice. To keep my intuitive antennae alert. To allow things to come to me.

8. Message from the Magical Creatures
Mythical Creatures Oracle - Western Dragon
The second card of color, also green. Here we have a card of action. The opposite of the message from the previous two cards. When the path is revealed to me through stillness, it looks like I will have a battle to confront. Great. I really freaking hate confrontation, let alone combat! This card promises conflict and struggle, an antagonist to face. Something must be defeated. I am the knight in the corner, and it feels rather like David and Goliath. But I must remember who won that fight. I will survive the challenge. I must be my own heroine. Again, embracing my divine feminine power will help me out here.

9. Message from the Dream World
Dream Inspirational Cards - Reading
The first thing I thought of when I turned this card over was the play on words. I was literally doing a "Reading". This card speaks of knowledge and learning. The guy is reading strange and wondrous and otherworldly things. I am so passionate about so many new subjects lately (mostly involving strange and wondrous and otherworldly things, as it happens). I feel like I don't have time to do it all.

This guy has spikes on his knees, a huge BACK OFF to anyone who tries to approach him and interrupt his reading. I can relate to this. I need to carve out time to read and study, and make it a priority. There appears to be a head on a spike next to this guy. He is not fooling around. This is what I feel like doing sometimes to people who interrupt my reading.

There is also an inside joke with my son that I see in this card (involving the Rubik's Cube being all one color), a private nod for me to lighten up and laugh more with my kids.

There was a great deal of synchronicity in this reading, both with my current interests (what I'm studying, meditation, divine feminine power), and also how the cards confirmed each other's messages and my intuitive feelings so blatantly.

Though this spread takes a lot of time and energy with all the different decks, I feel it is well worth the time to invest on Halloween night.