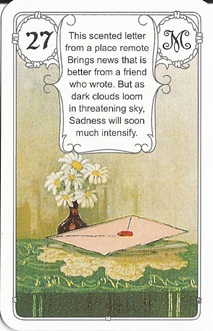 There are many versions of this deck. There is the Blue Owl and the Red Owl. There are ones with playing card inserts, and some with verses on them instead. And the verses come in different languages.

The deck I have, and the one I am reviewing here, is the Blue Owl deck with the English verses.

The Cards
There are 36 cards measuring 2 1/4" x 3 3/8".  The backs are not reversible, but this deck isn't mean to be used with reversals. The backs are lovely, blue and white, with an owl in the middle of a flowery design.

The cards are numbered in the top left corner, and in the top right corner is the initial "M".

Taking up most of the top half of the card is a verse in English. The bottom half of each card is an illustration of the symbol. There are no titles on the cards. The imagery is self explanatory, and the name of the symbol is mentioned in the verse.

The verses refer to the placement of the cards in a layout, and the meaning of each card changes depending on its proximity to the significator card (Man or Woman). I don't read this way, so I don't utilize the verses myself.

Some examples of the verses: 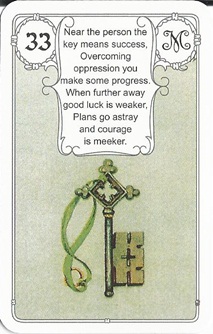 Coffin:
Illness is known, sickness is near,
Fate has its own ending to fear.
You lose your money, all's hopeless to you.
And what's not funny your courage fails too.

Moon:
The slumbering moon when it rises near,
Means great honors are bound to appear.
When moon beams fade the omens grow ill,
Remorse will invade with an unpleasant chill.

Ring:
Ring to the right - the love that you cherish will always be bright and continue to flourish.
Ring to the left - and troubles begin: Your love will be cleft and filled with chagrin.

Birchrod:
Birchrod brings strife, and what should be bliss
To husband and wife has gone all amiss.
Prepare for sorrows that dampen the day,
Begotten of quarrels that bring much dismay.

The language, as can be seen by the verses above, are old fashioned. So if you are going to be reading the cards using the verses, obviously some things will need to be read metaphorically. You won't always be reading for a "husband and wife", for example. 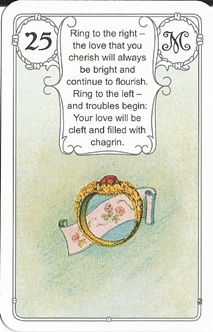 How it Reads
For the most part, I like my cards on the funky side. I had stayed away from this deck for a long time because whenever I saw the cards online, they seemed a bit boring to me. But when I finally got them, they immediately worked their magic on me. Every reading I did with them was spot-on accurate. The cards spoke so clearly and I was able to intuitively connect the dots between the cards, so that I was never left scratching my head, wondering what any combination of cards meant.

As for the verses, I don't read them. I ignore them. I don't read Lenormand the way the verses are designed to be read. So they're like pretty poetry that I ignore as I just look at the imagery. (It would be lovely to see these cards printed in the future without the verses or playing card inserts.)

If you are a beginner, and know nothing about reading Lenormand cards, relying on the verses alone might be confusing, and if not confusing, then certainly limiting.

There are many sources for learning the Lenormand system online. It has become something of a party lately in the card reading community. I strongly recommend picking one system and sticking to it. Mixing systems will only be confusing. The system I learned, and personally recommend, is the Treppner Course. 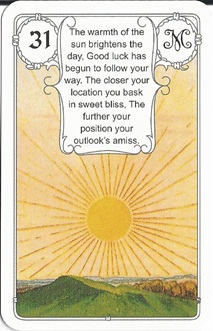 LWB
There is a tiny, 15 page little white book that accompanies this deck. There are brief meanings listed for each card, and a 36-card layout with a sample reading. (Again, this is not the system I use for reading these cards, but if you aren't interested in learning the Lenormand in greater depth, it is one method you can use.)

Final Thoughts
I love this deck! Although I primarily use my own Lenormand deck for my personal readings, this is definitely now my second go-to deck. Though still brand new to me, it's already becoming "old reliable".

The images are classically beautiful, feel very gentle and old-fashioned, and look very pretty laid out together in a reading. My only regret is not having acquired this deck sooner! 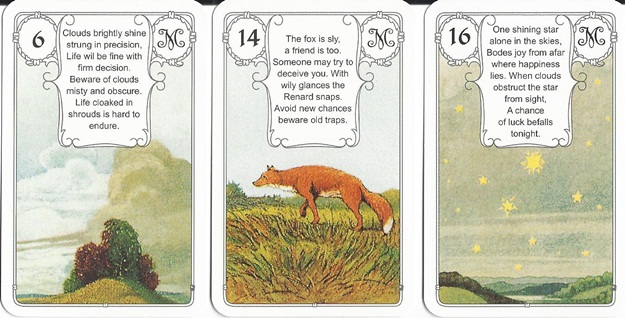 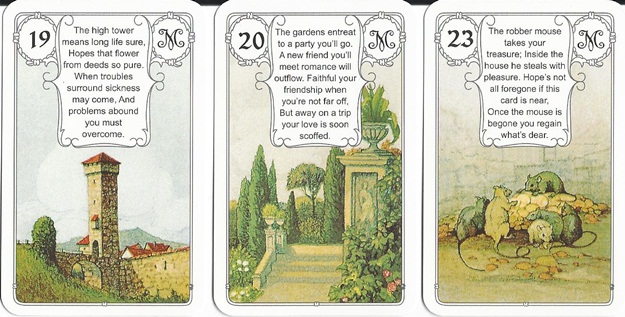 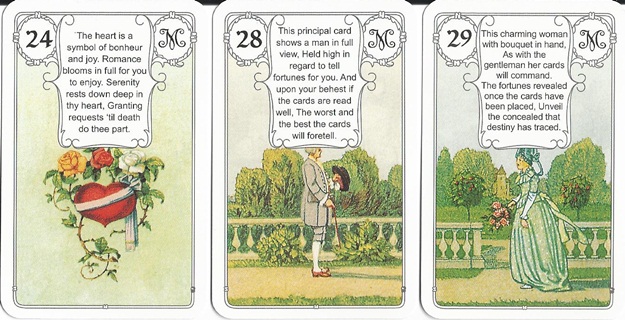 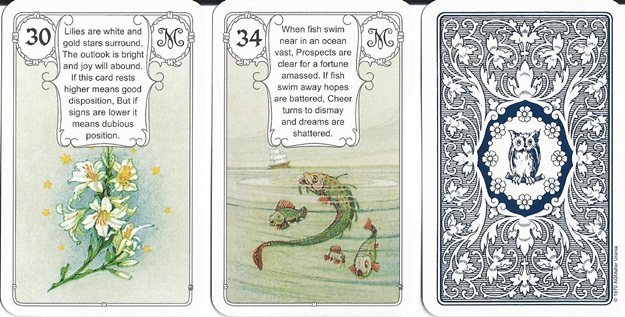 This deck review was originally published on my previous blog (Tarot Dame) on 1/26/13.