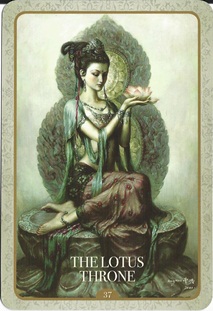 The Kuan Yin Oracle is a gorgeous new deck by Blue Angel Publishing, illustrated by Zeng Hao, with the accompanying book written by Alana Fairchild. This beautiful collaboration resulted in a deck and book set that is as lovely a treat on the eyes as it is for the spirit.

"Kuan Yin is the Mother of Compassion. She guides us into our enlightenment, which is being able to live in  harmony and unity with the Love that is, and surrendering into that Love. Enlightenment is not meant to be a distant spiritual goal, but something that we can choose to live at any time, by choosing love, kindness, compassion and wisdom over fear, judgement, anger or separation from the Source, the Divine Feminine, that seeks to nourish us so that we blossom into the fullness of our being.

The Cards
The 44 cards measure 3 3/4" x 5 1/2". They are sturdy yet flexible, with a glossy finish. The backs are not reversible, as the deck isn't designed to use reversals. The back is an image cropped from the Tai Chi Rising card. This image is also on the covers of the box and book. The deck and book set is housed in a nice sturdy box. The book is a bit larger than the cards.

Wow, was it ever hard to select images for this review. There isn't a bad image in the deck... not a single one that I don't like. The cards are all so beautiful, elegant, graceful, peaceful and feminine. I'll just share some thoughts on some of the cards.

My favorite card is the Lotus Throne (above). When I saw the image of this card online, I had to have this deck. It is beyond gorgeous. I want to be her.

The deck is comprised of cards featuring a single woman on each card, with only a few exceptions. There are four cards that have a group of people in them. And only one card, Eight Immortals, has men included in it.

The Gates of Heaven card is the only one that doesn't feature a human in it. It's a gorgeous archway with the feeling of slight fog all around. 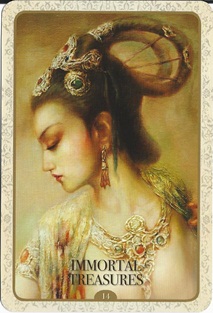 The Immortal Treasures card is the only close-up image in the deck.

Sound the Fierce Flute is different from the pack. While it is artistically the same style, there is added paint texture, which looks really neat. Normally a singular deviation from the rest of the deck would bother me, but I really like it.

In fact, it wasn't until writing this review that I realized that this deck has several one-card stand-outs: The paint texture in one, the one close-up card, the one card with only an archway, the one card featuring men, etc. Yet even though these cards are one-of-a-kind in a deck full of similar images, it all flows together seamlessly.

The lotus is a recurring theme in the deck, of course.  There are also many instruments featured, including the pipa (most often shown being played by a woman holding it up behind her head), harp, flute of some sort, and a couple other instruments that I don't know by name.

There are a couple groups of cards that are extremely similar to one another. It was quite noticeable as I initially thumbed through the deck. So until you're familiar with those few, reading the title is important to be sure you've got the right message.

How it Reads
I was blown away with how accurately this deck matched my daily life experiences. For a couple weeks, I pulled a single daily card, and it never failed to align, with minute detail, with what was going on for me that day.

Another thing I enjoyed was the recurring card effect, which sometimes happens for me, and when it does, I feel a special connection with the deck. In a span of 10 days, I had 4 cards repeat in my daily draws. Two of the repeaters happened on consecutive days (where I pulled the same card two days in a row). When the cards would repeat, it would either mean something entirely different or it would remind me of a message I had received earlier.

When I drew The Tao two days in a row, listening to the message resulted in a super-productive creative experience that I foolishly would not have allowed myself otherwise.

Thanks to this oracle deck, I have allowed myself some much needed relaxation time during a period of high activity. I can even thank the Kuan Yin Oracle for a cleaner house this week! True story.

The deck reads very gracefully, and the spiritual messages are gentle and empowering. The cards, gorgeous as they are, don't lend themselves to intuitive readings on their own, as they are all very alike. So the book is invaluable for this deck to work its magic. You really do need to learn the meaning behind each card.

This deck has not failed to give me the exact message I need to hear on any given day. Every time I draw a card, I am amazed at how it seems to be written just for me. It has been like having a divine friend with me, knowing exactly where I am and where I want to go and what I need to do, guiding and encouraging me along the way. 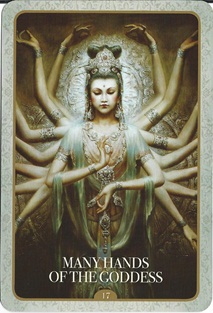 The Book
The 144-page book that accompanies this deck is wonderful. Alana Fairchild has a lovely voice, and was the perfect author for this set.

For each card, there is a small black and white image, along with a message. This is followed by a Healing, which is a meditation/visualization exercise. Then there is a closing Prayer.

(The book doesn't talk about the imagery in the cards. Sometimes this would have been helpful. As an example, there is a card called Eight Immortals, but there is no information on who these eight immortals are. It just refers to them as such.)

The author's voice is so comforting, it's as though she channeled Kuan Yin's compassionate and loving spirit while writing the book. The passages guide you lovingly through the difficult times as well as the blessed. You can really feel the divine energy coming through her words. When you read the message, you feel loved, which is an amazing testimony to the power of the author's voice.

Final Thoughts
I love this deck! Both the cards and the book simply exude positive feminine energy. The images are exquisite, and the book is marvelous. If you are looking for a deck that will channel the Divine Feminine, look no further.  It's been a really beautiful experience working with these cards and book... it's a set I will cherish.

This deck review was originally published on my previous blog (Tarot Dame) on 2/18/13.