is a deck that was sent to my 5 year old daughter who is one of the biggest cat fans in the world. But of course there can't be a deck in the house that I don't also get to put my own paws on from time to time!

Cat Wisdom is a photographic deck consisting of 45 cards (approx. 3.5" x 5"). Each card features a photo of a cat or kitten, either alone, or with other cats or different animals (other animals include dogs, frogs, squirrels, goldfish, a rabbit and a bird). The bottom of each card displays a single word or short phrase. The image on the backs of the cards is the photo shown on the "Safety" card (a kitten peeking out of a basket), which is also the card shown on the cover of the box. The accompanying booklet expands on each keyword with a paragraph, along with a black and white version of the photo used on each card.

I expected this would be a cutesy little deck, a novelty, with little actual (relevant) guidance to impart. I was wrong. It is indeed cutesy, however that doesn't prohibit it from also being very accurate in its advice. 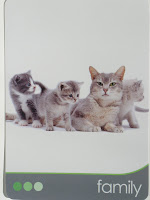 For example, I was having a conversation with my son while shuffling the deck. He was asking me for something just after I had finally sat down after doing a bunch of household chores. I began teasingly, exaggeratedly telling him how instead of asking me to do something else for him, maybe he should appreciate all I do for him. Appreciate the things I do on a daily/hourly basis with no thanks whatsoever. Appreciate how good he has it, and how lucky he is. I love teasing him until he rolls his eyes and starts laughing. So when I got that result, I asked him if he wanted me to pull a card for him. He said no. I pulled one anyway. He laughed. He said, "It better not say anything about what you were just telling me." I pulled the "Family" card. I said, "Ah ha!!!" I opened the book to see what it said, and I burst out laughing. I read the first line aloud to him: "Appreciate your family-" The exact word I had been repeating over and over again while shuffling! Amazing!

Several months ago, my daughter did a reading with the cards, and the image was very literal in showing the current condition of our cat. (The photograph showed a cat with its rear in the air, and our cat was in heat at the time, sticking her booty in the air constantly!) 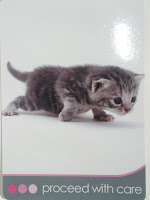 Another surprise this deck had for me was how the images do a very good job of portraying the sentiment of each card. They aren't just pictures of cats with a random/irrelevant word thrown at the bottom of the card. The kitty in the Alarm card definitely looks alarmed! The kitten in the Proceed with Care card is doing just that, crawling cautiously forward. The Tolerance card shows one kitten pawing the head of another, while the cat being pawed is tolerating the jab. The Keep a Lookout card (not shown) shows a sleeping puppy with an alert kitten by its side, standing guard. The marriage of the images with the key phrases shows the care and deliberate attention that was put into this deck.

Here's an excerpt from the accompanying book:


Trust: If you are feeling torn about which direction to take, it is time to make a decision. Both paths will be challenging and rewarding, so choose one and trust that whichever one you choose will be the right one for you. It's time to move forward. 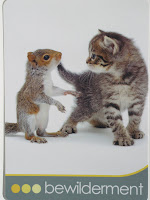 I have nothing negative to say about this deck. True to its subtitle (45 cards to inspire and uplift), my experience with these cards has been nothing but positive. It's a great deck for those times when you need gentle yet truthful guidance.

are right up my alley... but for all you dog lovers out there, there's also a Dog Wisdom

deck for you too!


See below for more images from the Cat Wisdom deck. 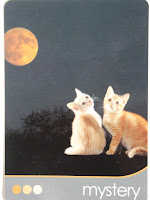 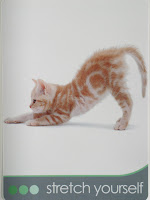 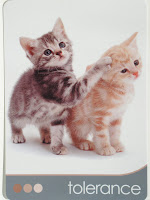 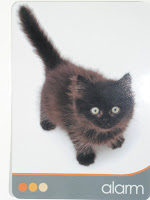 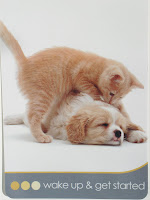 This deck review was originally published on my previous blog (Tarot Dame) on 6/9/09.