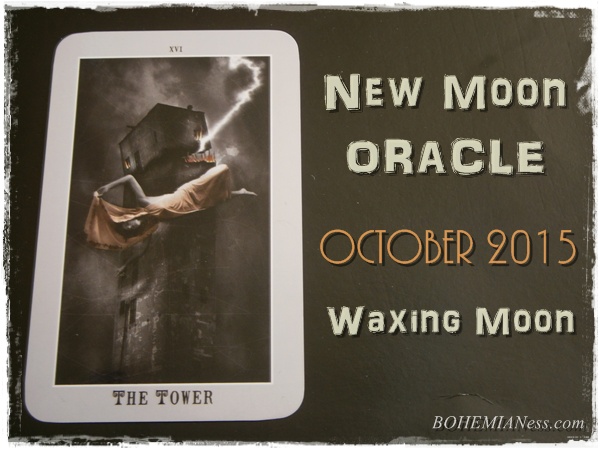 Tonight is the new moon. I pulled a tarot card to cover the next two weeks of the waxing moon.

What is new, what is coming?
What is growing, manifesting, becoming?

I drew a card from the Major Arcana of my Silver Era Tarot deck.

The Tower is a very dramatic card. It's mostly seen in a negative light, but there is always a flip side to any coin.

The Tower shows a woman falling from a high tower, and that's gotta hurt. The Tower is being destroyed by lightning. Since 9/11, the Tower has often reminded me of the fall of the Twin Towers. The pain, destruction and devastation.

This card is about the destruction of a foundation you have long relied on. Thing is, oftentimes our foundations are built on shit and not worthy of our blind loyalty. The very thing we lean on can be our prison.

While The Tower can indicate something devastating like an accident, break-up or house fire, it can also be about enlightenment, freedom and escape.

It can mean breaking free from limiting beliefs, leaving a destructive relationship or even having a brilliant epiphany, creative breakthrough, or A-ha! moment.

Over the next two weeks, walls might come crumbling down. But they are meant to fall. Instead of despairing, welcome it. You need to find what's under the rubble. Find the diamond in the dark cave.

Something major is coming. Something you depended on will fall away, revealing something better for you in its wake.

Be ready. Be open. Be willing to change your perspective, big time. Be receptive to change. Be willing to be wrong about something you thought you knew for sure. Allow Life to show you something new, something better. Make room in your life, in your mind, in your heart for such an awakening.